Madison Bumgarner was awesome. The Giants got their hits in the wrong order.

The best way to explain Tuesday's game against the Nationals is with a single swing. 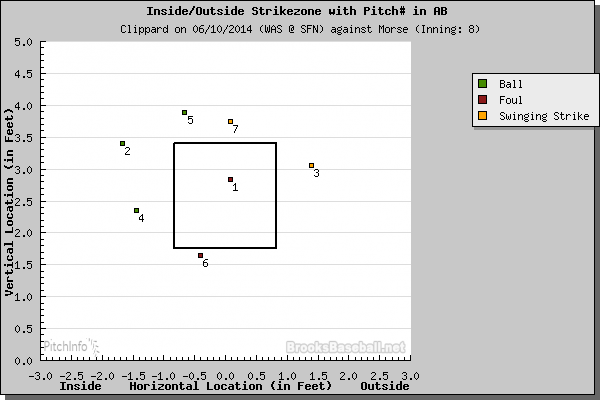 The pitch you're looking at is the #1, the red square in the middle of the strike zone. Baseballs get thrown in the heart of the zone without repercussions all the time, but it's rare to see a hitter perfectly time his swing like Morse did and just miss it. He fouled the pitch straight back to the backstop, and it ended up as nothing more than an 0-1 count.  But he was so close to glory. If you're a visual person, this should help:

How the Giants lost on Tuesday night (to scale)

That isn't to take away from Doug Fister pitching well, or anything the Nationals did right. It's not to say the Giants were robbed or that they deserved to win. Just pointing out Morse was that close to making this a happy fun thread. Throughout the year, the Giants bats have been where they needed to be at the right time. I don't even think we can be mad about anything until July. The last time the Giants lost two games in a row, it was to the Marlins. That was long enough ago, I had forgotten they had even played the Marlins this season.

This lengthy, hours-long losing streak is a reminder, though, that you can expect one of two things for the rest of the season. Either you're convinced the Giants are a 100-win team and always were supposed to be, and that there will never be a bumpy stretch on the road to divisional glory, or you have to expect a stretch in which the Giants don't line up their hits in the right permutation, or where the two-out hits don't come, or where Michael Morse *just* misses it.

That bumpy stretch doesn't have to be now. Just a guess, though, that if you're expecting 100 wins, you're setting yourself up for a season that's way more frustrating than it needs to be. Sometimes, it doesn't all work.

Also, that was a stupid game.

This was the second hard-luck loss of the year for Bumgarner (April 22, at Colorado, was the other). He didn't have more than a couple last year, and I'm not seeing any in 2012. There was a time in 2011 where it seemed like he was getting cained more than Matt Cain, but I think we're just hypersensitive about those things. He's probably not cursed. Not like Cain.

He didn't have his Grade-A stuff tonight, or at least his plus-plus command. If you were going to nitpick a performance from Bumgarner's season, this would be one of the contenders. Sure, the runs he allowed came in a barrage of bloops, but he also benefitted from at-'em balls all night, especially in the first inning.

Yet he was still awesome. That's the level he's reached, where you can watch a two-run, seven-inning start and come away without being super impressed. The slutter wasn't boring in on right-handers like it has been. He had only five strikeouts. Meh, I liked his earlier stuff better.

One of my offseason running gags in my day job was to bring up the Doug Fister trade when it wasn't called for. Writing about the White Sox? Here's a silly aside about the Tigers trading Doug Fister for no discernible reason. Writing about Greg Maddux's 1995 season? Here's a three-paragraph sidebar about the stupidity of giving Fister away.

Nope. Stupid trade. Bad trade. How's Rick Porcello doing since his hot start? Troubles getting out of the sixth? Lots of hits? That's weird. I'm sure that'll change, though, and Fister's contract would have been up ... no, that's funny. Fister's contract ends after next season, just like Porcello's, except Fister makes less money.

That trade should have a YouTube conspiracy video that goes viral, linking the Fister trade to Google's data banks in Oregon and Edward Snowden assassination theories. I don't even like the Tigers, and I still get so worked up by that trade. Now the Giants have to deal with it? They have to get shut down by Fister? What in the hell did we ever do to you, Tigers?

Don't answer that. It was a rhetorical question.

I like Tim Flannery a lot. Every third-base coach will make you flip over your coffee table from time to time. Every single one. The best coaches are the ones you don't notice. There's rarely a reason for me to mention Flannery around here, and that's a good thing.

Still, he occasionally needs reminders, too. Here's a graphic I made for Flannery last year.

It still applies. I'm not going to play the blame game -- if Sandoval is held, Morse still needs to get a hit to score the run -- but that was a curious decision, and not in hindsight.

The Dodgers won again. You didn't think it was going to be a runaway season, did you? If movies had plot structures like this, everything would be boring. Andy Dufresne would be found not guilty and he'd get the phone number of a comely lass on the way to collect his lottery winnings. You don't want to watch that. Where's your sense of adventure?

Just kidding. Runaway season, please. Those are the best.