Barry Bonds pirouetting, and other moving images from Giants history

GIFs existed back for some of these, but they were mostly dancing babies and rotating "under construction" signs.

Share All sharing options for: Barry Bonds pirouetting, and other moving images from Giants history

An intrepid Twitter user alerted me to video of the infamous Bonds pirouette of 1997. The scene: The Giants were two games back, with the Dodgers in for a two-game series. In the first inning, Barry Bonds hit a home run off Chan Ho Park that is still traveling. Bonds did this:

It was a glorious moment. If I recall correctly, Neil Armstrong called to congratulate Bonds, saying, "Nothing I have ever done or will do can top what you just did." I may not recall correctly. But he would have been right to do so.

That was a GIF we needed. That was a GIF we would have made in the past to celebrate Giants baseball, and it should have existed. Here it is. It made me wonder about other events from the pre-GIF era that should exist. This is an incomplete list. Any suggestions welcome.

It's been done again, but never quite like this. Before there was an Internet for the masses, this catch went prehistorically viral. It was on every newscast that night, every morning show the next day, and every baseball highlights package for the next decade. Why? Because screw you, Ozzie Smith, that's why. Also, the part with the bare-handed catch.

All hail one of the more celebrated bad routes in history! The best part, other than the hand, is how Mitchell pushes the door open. Just a nice touch.

Mays was almost 40 when he made that play, and it was one of those clips I'd see as a kid with no context. It would always show up in a package of pre-game highlights, but I had no idea who either of the players were (I assumed Mays was one), and I had no idea if the guy who made the catch was still alive (he was!)

Trivia: The Giants won this game, 2-1, on a walkoff groundout from Gaylord Perry, who was hitting for himself with the bases loaded and one out in the ninth inning because it was 1970 and everyone was on drugs.

Considering the situation, I posit that J.D. Drew's throw was the worst throw of all time. Look at where David Bell is when Drew gets the ball. Bell was like a Molina carrying balloons to make him a little faster. Look where the throw ends up. Yet Bonds still gets crap for his on-target throw to get Sid Bream.

How did that feel, future Good Giant Mike Matheny? 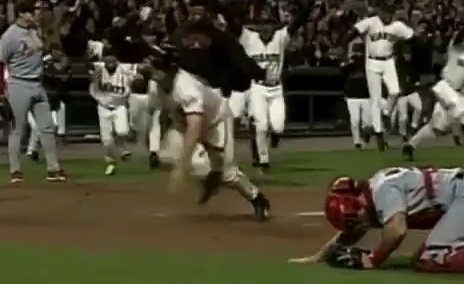 If you don't know the story, here's the story. It's one of baseball's best stories. Some bat flips are done out of showmanship. Some, out of arrogance. This one was pure elation.

I'm not sure if I'm writing for this blog if the 1997 Giants lose 100 games. That was such a perfect regular season, and it hooked me good. Rod Beck was turned on by the fickle fans, as most relievers eventually are, and the Giants had a shiny, new toy in Roberto Hernandez, who threw 100 m.p.h., and everyone took to him rather quickly.

For the clincher, though, Dusty Baker went with Beck. It was the right choice. Miss you, Shooter.

7. Bonds on the dugout

The Giants hadn't made the playoffs since '89, but more than that, this was the first appearance for Bonds as a Giant. This was just the fourth year he was on the team -- he wasn't an inextricable part of Giants lore yet. He was always called out when he didn't produce, always labeled as surly and awful. This was one of the first displays of pure emotion he had shown.

As I was at home, screaming "GET OFF THE DUGOUT ROOF. YOU HAVE CLEATS ON. GET OFF. THAT SEEMS SLIPPERY."

8. Will Clark and Kevin Mitchell plotting

The legend is that Will Clark was reading Greg Maddux's lips, and he read "Fastball," which is why everyone holds their mitts up to their face now. Maybe. I'd like to believe it. Mostly, though, I'm just fascinated by these two badasses talkin' baseball. Mitchell has an screw-this-guy look, and Clark looks like Maddux set his favorite stuffed animal on fire.

10. What in the hell, Pablo Sandoval?

This was from the other night, but I forgot to GIF it. What in the hell, Pablo Sandoval? What in the absolute hell?