Until my memory goes, I’ll talk about the July 9 game against the Mets last year. The Giants lost in 16 innings and 12 hours later, they signed Jeff Francoeur to stop the bleeding. It was the universe giving our collective championship hopes a pink slip.

This comes up now because my first response to the Giants losing the first instant-replay walk-off in history is "omen" by default. Now, I’m a rational feller, and I don’t actually believe in omens. As a baseball fan, though, I most certainly do believe in omens. It’s the paradox of being a rational baseball fan, and it’s part of the fun. Except when the omens are true, which is never, except for always. (They’re never true. Mostly.)

Just like that Mets omen that wasn’t, though, there’s a rational explanation for Tuesday’s game. Hear me out. It turns out that, in a one-run game, the 25th-best player on the roster plays more like a 26th- or 27th-best player on a roster, behind the bullpen catcher and Mark Gardner. It doesn’t happen often, and it takes a manager to put the player in that position.

Here’s the error that lost the game:

Ehire Adrianza had no business making that throw. That was taken from the Pirates broadcast, but the Giants broadcast had a little better vantage point. By the time Adrianza was letting go of the ball, Starling Marte was on his side, sliding into the base. The ghost of Shawon Dunston couldn’t have thrown Marte out. Even if there were merely long odds instead of impossible ones, it was still a two-out situation, and the Pirates were going to need a hit or an error to win. There was a lot of risk. There was a limited reward.

In the top-half of the inning, with runners at the corners, Adrianza was up with two outs. Bruce Bochy could have (and should have) pinch-hit for him. Adrianza doesn’t have known platoon splits, so it’s not as if going up against a lefty was the problem. The problem was going up against a pitcher. Adrianza should be treated like Brian Bocock (hitting .351 in Triple-A this year!) until further notice. Bochy didn’t put Brandon Hicks (or anyone else) in against the lefty. Then there was unpleasantness that begat unpleasantness.

So let’s all blame Ehire Adrianza and Bruce Bochy for …

Wait, Adrianza was the reason the Giants had a single run in the first place? Working a nice at-bat to get a sacrifice fly after Pablo Sandoval had his worst at-bat of the year of the day?

I’m so confused. I need someone to blame. Baseball needs to get better about giving us someone to blame. The only thing I know is that it wasn’t an omen, and it wasn’t exactly the fault of one player. There were eight position players who banded together to score one run over nine innings. There was a pitcher who saved his worst pitch of the night for last. 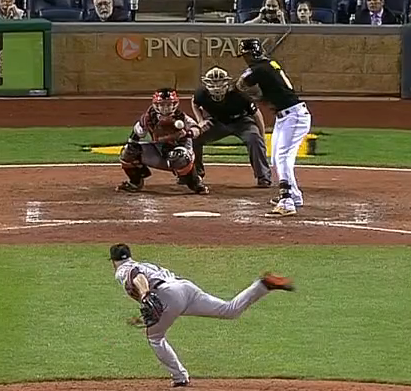 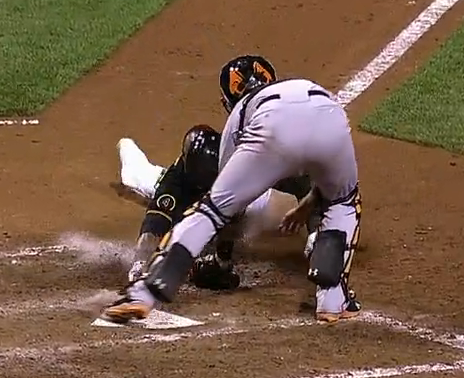 If Pablo Sandoval’s throw is just a little more to Posey’s left. If Hudson is backing up third like (I believe) he's supposed to, if ... well, if any of that happens, maybe the Giants lose in the 10th inning on a bases-loaded walk. Or maybe they lose in the 18th on a balk.

This was the kind of game that reminds you why the very best teams in baseball history lose a third of their games. Sometimes — and I’m just going to use a phrase that I coined on the bus the other day — that’s just the way the ball bounces, you know? And when that ball kind of bounces into your beans, it doesn’t feel so bad when your team literally won a game on a bunt single from a reliever the night before.

Can't shake that feeling that the first instant-replay walk-off means something, though.

This is probably payback for Stan Javier getting the first interleague hit.

Boy, Tim Hudson has been great.

Boy, Pablo Sandoval has been lousy.