Jean Machi gets a shirsey, right?

Let’s talk about Pablo Sandoval’s slump. The thing that I’ve noticed is

I’m fond of writing things like, "Baseball is a long, long season," mostly because it is. It’s ridiculously long. You know who thought it was a good idea to play 150+ baseball games every year? People without electricity. If they didn’t have baseball to follow, they would have literally spent their time trying to catch possums with their bare hands. The season had to be that long for those poor people, and we’re still being affected by their neanderthal problems.

The great thing about the ridiculously long season, though, is that it increases the odds for complete nonsense. Pedro Feliz catching. Ruben Rivera running from first to third to first to second to third to home. The more games there are, the more likely it is that the simulator breaks and prints the box score out in wingdings. This was one of those games. This was a game with ducks and an umpire-pelting, and it will be remembered for other things. Most games wish they had ducks and an umpire-pelting.

Forget the extra innings and Jean Machi and the comeback for a second. Think about the simple stuff first. The Giants went the entire 1980s without winning a game in which they allowed 10 runs. The entire decade. This is the second time they’ve done it in two weeks. It’s the third time they’ve done it in their last three months of baseball. Still, even without the ducks and umpires and empty benches and such, this was a weird, weird game already, at least as far as baseball is concerned. Teams aren't supposed to win after giving up 10 runs.

The comeback was baseball-weird, too. According to FanGraphs, the Giants had about a one- or two-percent chance of winning after the Pirates went up 8-2. The dinger-swatting Giants somehow overcame the deficit with nary a dinger. In the future, Play Index will be integrated with our cortexes, and all we’ll have to do is think of a query like, "What’s the biggest Giants comeback without a homer?" I’d guess this is close, at least in the modern era.

Clearly, though, the weirdest/best part of the game was absolutely Jean Machi laying down the most perfect bunt since Gregor Blanco in 2012. It was sublime. Yet it wouldn’t have been nearly as magical if Machi didn’t make it up the line in about four seconds flat. Seriously, maybe I’m doing this wrong, but I have 4:07.

I wouldn’t have thought Machi could go that fast unless you pushed him out of an airplane. And I think it mattered; Jared Hughes had a moment of pure, undistilled panic when he looked up and saw Machi that far down the line. Amazing. It was ruled an error, but hopefully they change that by tomorrow. It was a hit. 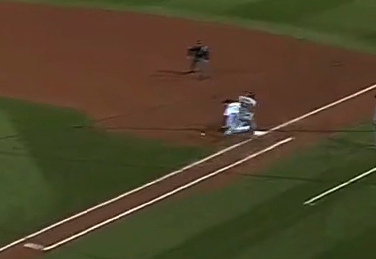 What did Matt Cain and Michael Morse think of that play?

They thought it was an ass-slapping good time. As did we all. What a magnificent baseball contest.

Go away, ducks, you do not belong at a baseball game.

Bad ducks. There should not be ducks.

Wait, there was baseball, too. Real, appropriate baseball. If the rest of this game wasn’t a full moon humping a tank of nitrous oxide, this would be what we remember:

That’s from MLB.com’s Gameday app, and it probably does the at-bat more justice than my silly words. Casilla — still one of the greatest Giants in history, at least when it comes to allowing earned runs — made all sorts of fantastic pitches to Neil Walker in the bottom of the tenth. This came after walking former battery-mate Chris Stewart as partial payback for a pinochle loss from two years ago, and it also came after a dandy wild pitch/passed ball combo moved the winning run to third. So not only did Casilla want to get the out, but he didn’t want to bury the ball in the dirt and see if Walker would chase. Not with a tired-legged and raw Hector Sanchez back there. That last sentence was a baseball sentence, I swear.

Casilla won’t get the win or the save, but he was a part of what might be the best plate appearance so far this season.

Though he did walk Stewart in the first place …

No one cares now, but for a while, people were completely indignant that Juan Perez swung at a 3-0 pitch in the top of the 11th with a runner on second and one out. Not only did he swing at the 3-0 pitch, but he was so geared for a fastball that he swung over the top of a slider in a dirt. He eventually struck out. To be charitable, it was probably the worst at-bat of his professional career, give or take. But you can be more hyperbolic.

Except I don’t mind the swing. Not at all. Madison Bumgarner was on deck, and the best chance the Giants had to score that inning was with Perez in a 3-0 count, looking fastball. If Perez gets his fastball in a 3-0 count, he’s basically akin to Buster Posey in a regular at-bat. Almost every major-league hitter is in that situation.

Working a walk is great if you’re playing for a big inning and there isn’t a pinch-hitting pitcher on deck. Playing for a single run, I think Perez hacking is a defensible call. I’m more offended that Jeanmar Gomez threw a slider in that situation, actually.

Mostly, I just wanted the game to end, and I figured a Perez two-cheeker was the best bet. But then we wouldn't have seen Jean Machi's Immaculate Bunt.

One final footnote: This isn't even the weirdest May game in Giants/Pirates history. That would be this one. Skip to the bottom of the ninth.

Wait, one more footnote: The Giants have won six straight and 10 out of their last 11. That's a fun footnote.