So you'll forgive the cognitive dissonance now that I have to explain both of them. The Sandoval propaganda was based on what I know. Young player with a history of production, going through an early-season slump. That happens. That happens all the time. Leave the dude alone and let him hack.

The Vogelsong cynicism was based on what I know. Older pitcher emerges from the mists after being okay-to-wretched for a decade, then he struggles as he gets older. That happens. That happens ... well, almost never quite like that, but the odds are against the older pitcher finding the fountain of youth.

Instead, both of them are making their early critics look silly. Sandoval was too talented to curl into a ball of Fernando Tatis and wither away. Vogelsong was supposed to be a brilliant meteor shower that we stumbled upon and never should have expected to continue. Anything above something was more than the Giants should have expected. Except now he's good again. Now he's really good again. The guy who surprised us in the first place.

Take the 1998 Yankees, for example. There's a good, good chance that the '98 Yankees will be the best baseball team to play in our lifetime. Except, look what Scott Brosius did for the '97 A's (.203/.259/.317). Paul O'Neill was justanotherguy in Cincinnati, but suddenly he was a star in New York. You don't care about the '98 Yankees, so I'm not going to share my vast, vast collection of Tino Martinez anecdotes, but that team was filled with nonsense. Just like the 2001 Mariners and just like the 1993 Giants. All teams going well are filled with nonsense.

I understand why Sandoval's contributing now. I have no idea why Vogelsong's contributing now. That's baseball, alright. It's not for us to understand. Just ride the snake. Ride the snake. I don't even know what that means, but do it, and when it stops, maybe you'll understand what's going on, because three weeks ago, I gave Ryan Vogelsong a six-percent chance of being in the rotation past June. Now he's the Giants' most reliable starter.

I dunno either, man.

There should be a recurring feature on this site:

How in the actual **** did Pablo Sandoval hit that?

Get some still shots, some GIFs, some expert testimony and ask each other, wait, how in the actual **** did Pablo Sandoval hit that?

Here's his sac fly in the sixth: 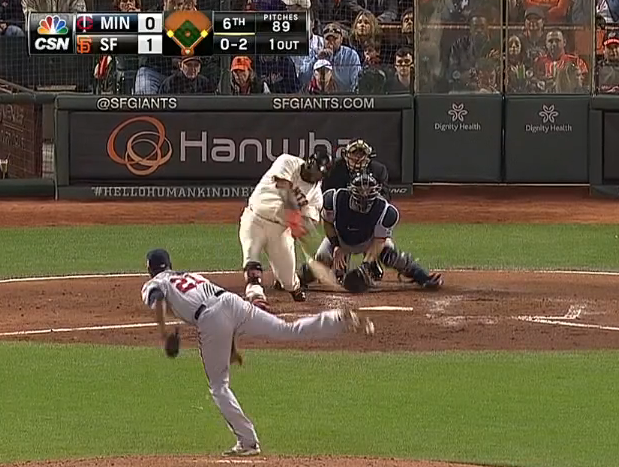 How in the absolute ... I mean, it's one thing to take that swing and hit it fair. It's another to make good contact with that abomination of a conscious decision. But Sandoval sent that thing 400 feet. It would have been a homer in, I don't know, 12 or 13 ballparks. It's absurd. Look where he was when he finished the swing: 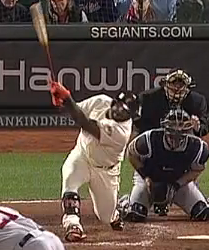 That's a portrait of pain. That's a sculpture in the Hermitage of a fallen Greek hero. That is most certainly not someone who succeeded in what he was trying to do. Instead, 400 feet. Run scored. Sandoval's the hero of the night on the offensive side. Also, because he did this:

You know who deserved that dinger?

That guy. That Mustang right there, that's who deserved it. Good job, effort. I like that guy.

I don't know if you could pay me to wear a panda hat for more than an inning. They seem itchy.

Seriously, though, that's the benchmark for Sandoval-related happiness. When he's swinging like an idiot and making it work. Hopefully, he's doing that for the Giants for the next six or seven years, even if I'm pessimistic that's going to happen.

Not worried about Sergio Romo. His excuse repository is twice the size of Sandoval's. Dingers happen.

Fewer dingers would be swell, of course ...