Well enough is kind of a beautiful thing.

If you had to go through and rank Tim Lincecum starts from the past two-plus years -- based on things like strikeouts, poise, and overall semblance of control -- this one would go near the bottom. We're talking 70 starts or so. Still, near the bottom. He had stretches where his command of breaking pitches snapped into shape, but for the most part, his fastball command was something you'd expect from Hunter Pence if he pitched an inning.

It doesn't matter, though. Lincecum gets the quality start, and his ERA goes down. He didn't deserve to have a good outing, but a good outing is what he had.

Good. Just, good, at least according to the line score. You don't know how ecstatic that makes me. It feels like we've been waiting for this game since 2012. If you know of one before this, keep it to yourself. Let us pretend. This is the game Lincecum should have had all along.

If you're not statistically inclined, here's how the last two seasons have gone: According to the nerd metrics -- the ones concerned with the things a pitcher can control, like strikeouts, walks, and home runs -- Lincecum hasn't been the worst pitcher in the universe. He's been passable. Sometimes, pretty okay. But there was this sneaky feeling over the last two years, hard to prove even in the PITCHf/x age, that Lincecum wasn't getting away with anything. Two runners on? Wild pitch that could have been a passed ball, followed by a bloop single. Runner on third, two outs? Infield hit to the second baseman. It never seemed like those stupid games were being allocated proportionately.

So when a shoulda-lost-but-won game shows up in Lincecum's inbox, let him have it. I'd guess that two of his nightmare games every year should be replaced with a game like this, -- #sabermetrics -- which means he should live like the normal pitchers.

That's all we're asking at this point. I'd like to believe that karma exists, that all of the weird two-out bloops and liners with the bases loaded were horrible flukes, and that one day we'd look up and see that Tim Lincecum's ERA was 3.59 and his FIP was 3.59 and we'd know what everything means and then we'd ascend.

I want to ascend. Up there, why, that's where Hunter Pence pitches in relief.

Right around the second inning, it was clear that the Twins were approaching Lincecum like he was a flightless bird discovered when the H.M.S. Beagle anchored close to shore. What is this thing? What does he throw? Does he ... wait, a changeup? Really? Since when?

Maybe the new Moneyball is confusing the hell out of interleague teams who don't have time to read up on the teams from the other side of the world. Yeah, ignore the Yunkai at your own peril, stuffy northlanders. But they're pretty okay.

As noted on the CSN broadcast, the Twins are one of the best-disciplined teams in the AL, swinging at fewer pitches out of the zone and drawing more pitches per plate appearance than any team in the league. So if any team is going to accept six walks from a starting pitcher, it was the Twins. They just never got the hit.

Don't apologize for this. Lincecum's been due one of these for years. Kind of wish he gave up eight walks.

Were you wondering about other Giants pitchers who have given up six walks and still won the game? Good, good. I'm interested in that crap, too. The last 20:

That is an amazing list. There are so many control demons, forever circling those names. Those pitchers give you a decent idea what Giants prospects used to look like, by the way. "Oh, if he can whittle his walks down to four per nine innings, he'll be fine." Then the pitcher never whittled his walks. Never. They kept walking and walking and walking hitters.

Then all of the first-round picks worked out at once, and Market Street was blocked off.

Do you know someone who tried to convince you that Pablo Sandoval was never going to be good again? I do. The only thing you need to remember from this post-game recap is that anything done to those people is protected under Fair Use and parody. I'm not suggesting you make them pay physically, but it's not the worst idea. They're sort of the worst.

Sandoval is going to be just fine. Sandoval is already just fine. I mean, he's still hitting .225/.280/.376 on the season, solidly in the Neifi zone, but there's no mistaking the unscrewed mind of Pablo Sandoval. He's hacking at first pitches, as suggested, and taking wild, laughable swings. Which is what he's supposed to do. It's magnificent to watch, a hitter returning to his roots.

For the last week or two, I've been writing the "thanks for all the fish" post about Brandon Hicks in my head. As in, wow, didn't expect that much, above and beyond the call of duty, will endeavor to respect your memory, thanks. Then he would ride into the sunset and forget about us all forever.

Except, he keeps hitting. Just enough. One out of every five at-bats, to be precise, with Hicks up to a clean .200 after Friday night. We're already smitten with his double-play turns, enough to make peace with other defensive shortcomings.  It's also probably time to ditch the Mendoza Line for the Hicks Line, which is basically "How low can this guy hit before he's not super rad?" Hicks at .200 is an easy choice.

This is a list of players who hit worse than .200, sorted by WAR. Brendan Ryan is first because of superlative defense. Carlos Pena is close behind because of tremendous power. Jack Hiatt is up there, too, because that's how you know Hicks is going to help the Matt Cain of 2044 develop.

Number 27 on that list before tonight: Brandon Hicks. That's after just under two months in the season.  I still believe. I still believe and encourage this wacky experiment to keep going. MIke Schmidt was on that list, you know. He ended up hitting 500 dingers and making the Hall of Fame. Hicks is at, like, at least 100 dingers this year alone, by my rough estimate. Could be a sleeper. 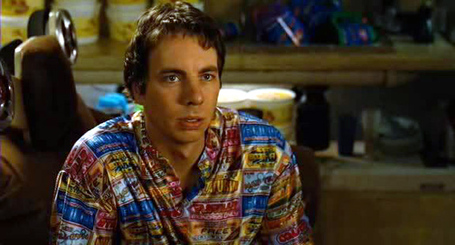