Are the Rockies a bunch of dirty cheaters?

Share All sharing options for: Are the Rockies a bunch of dirty cheaters?

We have accused them of jimmy-jacking with the balls

"I swear (Tulowitzki's) getting signs," Krukow said on the KNBR morning show. "There is no way you can hit like that, for this long. I mean, if you hit .571, that's for a weekend or a week. But you don't do it for six weeks. That's insane."

He then offers a non-apology, saying that Tulowitzki is a heckuva player, and that he isn't cheating, unless he is cheating, and that he probably is cheating. It's not a good look. Krukow said that "I'm looking at the numbers Tulowitzki has, and good God, there is only one reason you are putting up numbers like that."

You know who put up numbers like that over a full season? Barry Bonds. And no one accused Barry Bonds of cheating okay that's a bad example. But I've never been a fan of the "these numbers are good, so the player must be dirty" argument. Not with Brady Anderson, not with Davey Johnson, not with Roger Maris, and not with Troy Tulowitzki.

Again, it's not a good look. I wish Krukow didn't say all that.

It's time to shift the focus away from Krukow, and address Rockies fans who might be upset. I'd be upset, too. Tribal allegiances run deep, especially when someone accuses your team of doing something untoward. But let's ask a simple question: Why would fans or employees of teams in the NL West be suspicious of what goes on at Coors Field?

Answer #1: The intentional manipulation of baseballs is a pretty big deal, yet the humidor appeared completely out of nowhere.

"I was hitting balls and they weren't going out of the yard," Rockies first baseman Todd Helton says. "I was wondering what the heck was going on. I thought something wrong with my swing or whatever, and then a few weeks into the season they told us and it started to make sense."

Surprise! We've replaced your regular baseballs with baseballs covered in Folger's crystals and moisture! Why would that be a big deal? Jeez.

The whole way it was handled was weird. Even weirder was the lack of oversight. It took complaints from the Giants to get someone from MLB to make sure all baseballs were created equal. That's weird, too. Again, Rockies fans, put yourself in the position of the other 29 teams. Don't you think intentional manipulation of a baseball's properties is a big deal, and that the nonchalant handling of it was a little disproportional?

That isn't proof of cheating. That's an explanation of why the conspiracy gland gets pumping in some folks.

Answer #2: The only team that hits better at Coors Field now is the Rockies

This one's kind of freaky. 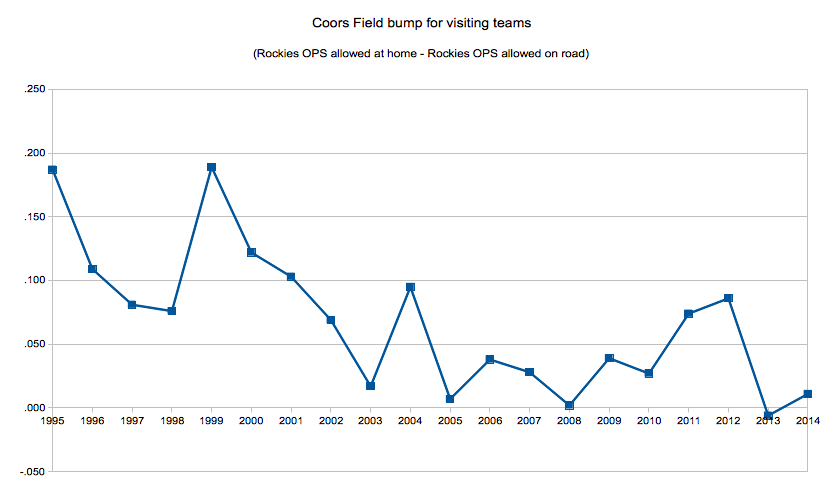 I'm so lousy at labeling this stuff. Here's the idea, though: In 1995, Rockies opponents hit for an .893 OPS at Coors Field, but just .706 when facing the Rockies away from Coors. That's a difference of 187 points. For the first few years of the new ballpark, away teams also got a substantial advantage at Coors compared to their numbers when hosting the Rockies.

Then, suddenly, poof. It's so different now that teams hit better against the Rockies away from Coors Field last year.

If you're into causation and correlation, you can probably guess when the humidor was installed by looking at that graph. It was installed in 2002.

Well, that's just the humidor doin' it's thing. It's supposed to suppress offense. That's all. Let's see a comparable graph for the Rockies over that time. 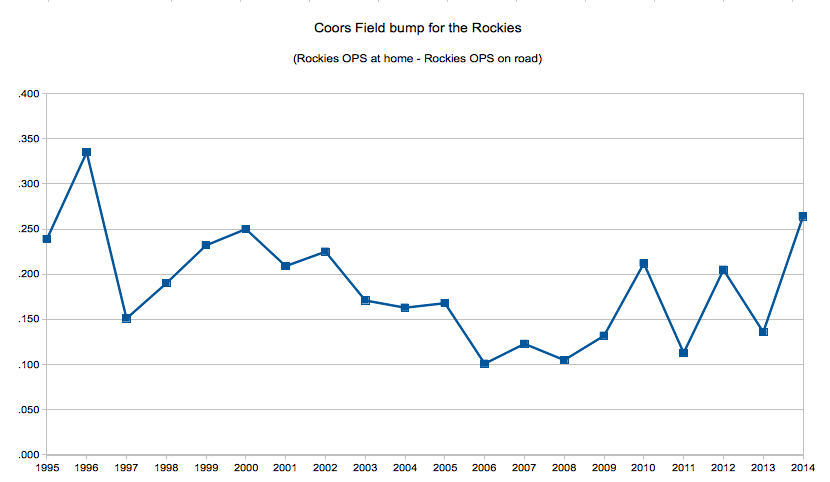 It goes up, it goes down, but it mostly stays consistent. Unlike the difference for the opponents, which is totally different, post-humidor.

Before you grab the torchforks, though, remember that Internet refrain: correlation isn't causation. The Rockies have always, always been a weird team to evaluate. If you want to play this game, here are the Rockies' home/road splits since they moved to Coors:

The Rockies have always been a screwy team at home compared to on the road. Maybe the other teams are all cheating. You ever think about that, smart guy?

I think the most logical explanation isn't conspiracy, but rather the Rockies have been messing with the secret sauce for years, trying to figure Coors Field out. They're building teams with flyball hitters and sinker-throwing pitchers. They've screwed around with four-man rotations and moist baseballs. Maybe in the middle of all that, they stumbled upon the types of players who can help maximize the Rockies' home-field advantage. It's kind of their job to figure that out.

When you combine the two graphs up there, you get a much more ambiguous picture.

Some years, it seems like the Rockies have a huge advantage. Some years, it doesn't, at least compared to their road numbers. This has been going on since Coors Field opened. This year, they're going nuts, but so is Dee Gordon. He's on pace to steal 90 bases and hit .300, which is roughly the player equivalent of what the Rockies are doing as a team. It's still early. There will be corrections.

Just ignore that I'm adding and subtracting OPSs, which are the result of adding two fractions together that don't have the same denominator, and we'll be fine. I graduated in English from San Jose State!

But look at that first graph. It used to be that when a team went to Coors, they would hit more. Then they stopped. As a fan, that's weird. It's not what we're used to. Combine that with the "oh, we have a humidor now, nbd" from up there, and you have an explanation why people are suspicious. It's not because they're sore losers or repugnant pig-men. It's because Coors Field is weird. It's the most unusual place for baseball in the majors, and second place isn't even in the same nebula.

They're almost certainly not cheating. But there's no way to stop wondering what in the heck goes on there. The park is too different not to wonder, especially considering that the Rockies are the only team intentionally messing with the physical properties of the baseballs they use. The bigger problems come when you start guessing out loud instead of investigating.

Now let's all shake hands and agree that Dinger is the worst mascot in professional sports.