That baseball game last night sure was a good use of three and a half hours, wasn't it? 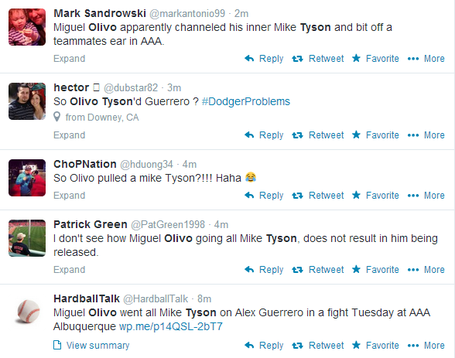 Short Stories With Tim Kurkjian
ESPN's Tim Kurkjian tells a story about Bruce Bochy's batting helmet from when he was a player with the Padres. It turns out, and this has been an underreported story, that Bochy's head is abnormally large.

Also, this is like a 1-minute video on ESPN's website, and it turns out they have this strange feature where you can turn off autoplay? Who would even want that? CSN has the right idea in telling me what I want out of constantly playing video. Keep it up, guys!

The Other Half of Troy Tulowitzki Going Nuts
The Giants started a series against the Rockies yesterday. Maybe you noticed. Colorado's best player, of course, has been Troy Tulowitzki, and while his offense has gotten most of the attention (and deservedly so because daaaaaang), his defensive play has been spectacular too. Here, Jeff Sullivan compiles some of his best plays in GIF form, and I, for one, very much enjoyed watching these plays while trying to force enough cognitive dissonance to still mutter to myself, "But Crawford's better."

NFL illegally supplied risky painkilling drugs, former players allege in suit
Ugh but I can't believe that Jhonny Peralta got such a big contract  the year after he got suspended for using PEDs. What about the children, Selig? WHAT ABOUT THE CHILDREN?

There's a silver lining to rash of young pitcher injuries
Sam Miller takes a look at TINSTAAPP in the wake of everyone who's ever pitched getting Tommy John surgery. I haven't even played baseball since I was on my middle school team in 8th grade, and I just had a consultation with Dr Andrews. His diagnosis was "Who are you and stop going through my trash"

Hero Cat ‘throws out’ first pitch at baseball game
In case you were wondering how this would happen after the exciting "Cat throwing a first pitch" cliffhanger from a link dump last week, here's the exciting conclusion. Does the ball make it to home plate? Does the cat run away because WHAT THE HELL IS THIS I'M A DAMN CAT? You'll have to click to find out!