Share All sharing options for: Michael Morse is a strong, dinger-blasting man

When the Giants officially announced the Michael Morse signing, it felt like a foregone conclusion. In fact, it had already felt like he'd been a Giant for weeks. It was boring and I kind of hated it. Morse was the low-priced, unexciting player with one tremendous tool -- obliterating baseballs with raw power -- that rarely gets the fan base all hot and bothered. The man can't play any thing resembling defense. (According to FanGraphs, he's negative 70.1 runs below average for his career.) And the one thing he really does well -- hitting for power -- was likely to be negatively affected by AT&T Park and the spacious parks of NL West division rivals. Also, he has the plate approach of a blind Aaron Rowand being attacked by bees.

My personal doubts about Morse's ability to hit for power are, at this moment, kind of silly in retrospect. According to ESPN's Home Run Tracker, Morse leads all of baseball in average home run distance.

Sorry. I blacked out for a second.

Morse has always had plus-power, but he's off to a career best this season when it comes to home run distance. I can't legally call this a baseball post until I hammer in a graph and, hey, would you look at that beautiful Michael Morse-home-run-distance-density graph below? 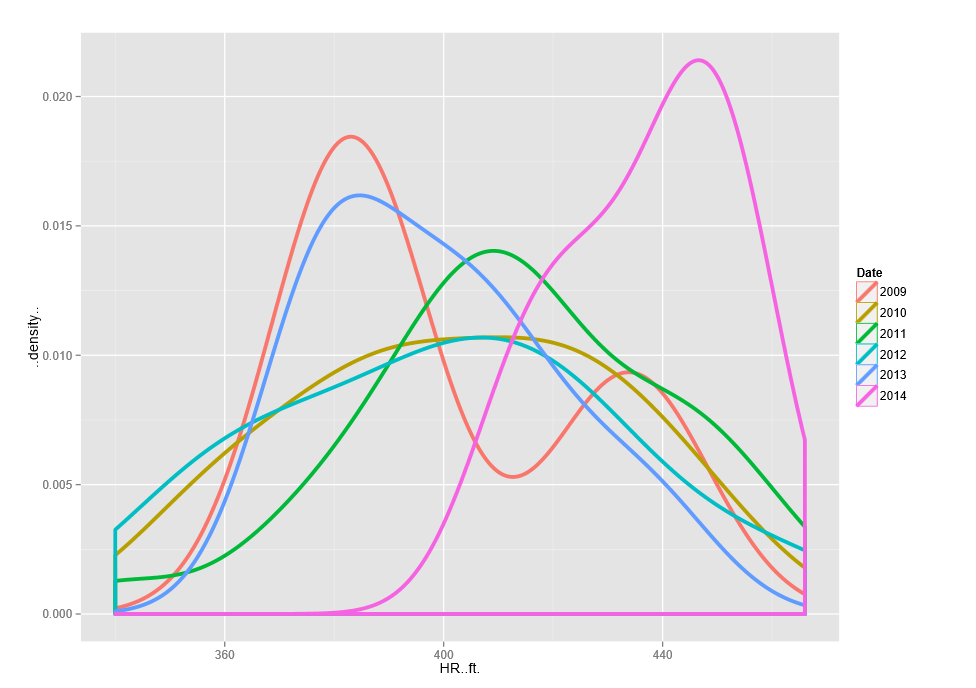 This graph shows the density curves for Morse's average home run distance by season from 2009 to 2014. He's generally been around a 380-400 guy when it comes to home run distance. However, this year, every home run he's hit has been 400-plus feet, including these two beauts from his two homer game at Coors Field.

Michael Morse is still a flawed player, but one that's incredibly entertaining when he's going right, blasting tape measure home runs into the stands. With his terrible defense and poor baserunning, he's unlikely to much more than an average player at best, even in his good years, but that doesn't mean he doesn't do one thing really, really well that's really, really exciting.

I admit that my thinking was wrong in one crucial regard: he's a lot more fun to watch than I could have imagined*. So, hooray dingers! Long live dingers!

* This is a lot easier to say now when he's not swinging at sliders in the dirt.