They were 5-1 against the Braves this year. That was fun, let's play two.

1Lo, and the spring day was unseasonably warm
2And the heathen of unfortunate mascotting did approach
3And there we saw the Giants, the sons of Mays
4And the Giants did smite the Braves of Atlanta, verily
5With dingers. And timely hitting. Also, dingers
6Rejoice in thy dingers

We'll have to sock this one away, this game in which the starting pitcher was shaky from the first pitch, yet the Giants still won handily. There was a period last year where Madison Bumgarner was looking like the Matt Cain for a new generation, a pitcher with lousy luck who often wasn't rewarded for pitching well. This game was his rebate. He gets one back. Just 30 or 40 more to go until he's even.

The other day, CSN Bay Area were soliciting suggestions on what the Giants should do with the roster with Brandon Belt on the disabled list, and one tweet read something like:

Seems kind of silly, right? But you're probably in the minority. At least, if the majority thinks that's silly, it's not close to an overwhelming majority.

So imagine what this site looks like to the folks who stumble upon it. It's the first search result for "Giants blog", I think, and it comes up for all sorts of other searches, so it's not like you have to pass a John Bowker entrance exam to get to the front page. Imagine the casual-to-serious fan coming upon a site that assumes everyone agrees that Gregor Blanco is a good player. It must blow minds. The dude's hitting .001 or so, and he can't lay off the breaking balls at his back foot.

/Who are these weirdos who think he's a useful baseball player?

This is for us, then, the unabashed Gregor Blanco fanpersons. And, you know, Blanco himself. It's for him, too. It has to feel good. He's unquestionably one of the more useful fourth outfielders in the game, and 50 at-bats sprinkled around a month's worth of sporadic play don't change that. Blanco was a loftonian menace today, working counts, taking walks, swiping bags, forcing errors, and hitting baseballs. What a world.

He's a good player, dang it. The Giants are lucky to have him.

(That doesn't mean you get to complain when he sits against lefties, you weirdos.)

The Giants are 26-15, which is the third-best record in baseball and second-best in the National League. One of their best hitters has been lousy all season. Another key lineup cog has been fairly bad. Imagine if Pablo Sandoval and Hunter Pence got hot at the same time.

Imagine if Pablo Sandoval and Hunter Pence got hot at the same time.

That's not how baseball works, I don't think. You don't just wait for everyone to get hot at the same time and average 10 runs over a month. This guy's up, that guy's down. This guy's down, that guy's up, and the other guys are sideways. Baseball is a game of ebbs and flows. It's better to burn out than fade away, all we are are bricks in the wall.

But imagine if Pablo Sandoval and Hunter Pence got hot at the same time.

Pence hit one of the more impressive home runs in AT&T Park history, as he's wont to do. The camera operator focused the wall, waiting for the triple to hit off the wall. Which is exactly what he or she should have done. Right-handers don't hit home runs there, they simply don't.

Pablo had his third straight game with good at-bats and solid contact. He's hitting over .200 now, and over .300 for the past week. Baby steps. Pablo is coming.

Madison Bumgarner wasn't too impressive on Wednesday, and it's not exactly a mystery why. He loves burying his slutter in on the thumbs of right-handed hitters; today, the pitch caught too much of the plate. He'll have mechanical wonkfests throughout the year, and this was one of them. The bad news is that it came against one of the better pitchers in the league. The good news is that guy was much, much worse.

It doesn't make a difference, considering the Giants won by six, but B.J. Upton made the worst decision to throw home that I can remember. CSN had a great shot of the play: 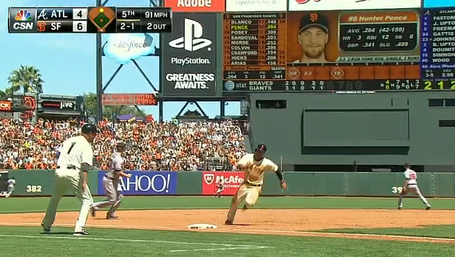 You don't throw that if Bengie Molina's running, and I'm not being hyperbolic. It's hard to tell there, but Upton got to that ball deep. He's not too far from the warning track. And not only was it not a Molina, but it might have been the fastest guy within city limits. What a terrible decision. It was a lollipop throw, too.

Later in the game, Upton was tossed for arguing a called third strike. It was the 30th time he had struck out looking in the series, give or take, and I think most, if not all, of them should have been balls. Still, he took pitches he should have spoiled, fell down swinging a couple times, and generally looked hilarious.

He used to be a good player. So recently that Angel Pagan was something of a consolation prize when the Giants re-signed him after 2012. The guy who would really make a difference is Upton, but, oh well, here's this Pagan guy back again.

But, good gravy, that throw.

Brandon Crawford is playing high-quality defense at shortstop and hitting .258/.342/.461 while playing half his games in one of the most extreme pitcher's parks in the last half-century.