The Giants went to a minor place, and I can say I didn't like its face.

The story of the game: The strike zone was a little goofy, especially on the edges. But it was goofy equitably for both sides, and Mike Minor was better at taking advantage. That is to say, better at "pitching." Not to take away from Vogelsong, who was mostly fantastic until his final inning, but Minor was the better pitcher.

/throws handful of peanuts into mouth

Hell, I don’t know. Remember this stuff when this place becomes a pay site.

The Giants did hit a few balls hard — opposite-field liners and dead-center fly balls that might have been interesting in Arizona, Cincinnati, Denver, or even Atlanta. But Minor looked like Tom Glavine, mixing speeds and hitting his spots. The Giants were able to Brandon their way out of the Clayton Kershaw game, but you get only a few of those cards every year.

Tip your cap, everyone, tip your cap, 20 percent if you can afford it, these caps work hard and make minimum wage, they have families, so tip your damned cap.

If you’re a silver-lining fetishist, and I know you are, take solace in Vogelsong pitching well. The last inning was a burning clown car, but Buster Posey’s phantom tag didn’t help the cause. For the first five innings, that was the Vogelsong template. Corner, corner, down, down, corner, corner, down, down. I wasn’t even offended by the pitch that Evan Gattis hit his triple on — it was right on the edge. Look at this danged pitch: 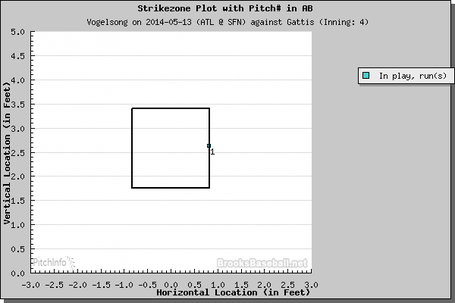 Because there was no story of this game, the story of the game became Posey’s non-tag, which should have been a tag.

Is this a concern? Is this sloppy technique? Was it just a great slide? Is Posey not manly enough to block the plate now? Is he hiding behind the new rules, the new Buster Posey rules, which just happened to be named after him, like that’s some sort of coincidence we're supposed to lap up like good sheeple?

So it goes with baseball. There are only three things about that play that interest me:

3. This GIF of Vogelsong not spinning around and biting Posey’s nose off through the catcher’s mask.

I'll take 100 swipe tags that miss before the next violent collision.

Ken Burns wore a baseball glove into at least two different broadcast booths. He did this on purpose.