This augers well for everything.

When Yasiel Puig hit a home run to tie the game in the sixth inning, two thoughts popped in my head:

That wasn’t me being cynical. Them’s the odds. When Adrian Gonzalez singled in the go-ahead run after middle-infield bumblery from Ehire Adrianza, the odds were even worse. The Dodgers had about an 80-percent chance of winning the game.

Then there was The Wave. 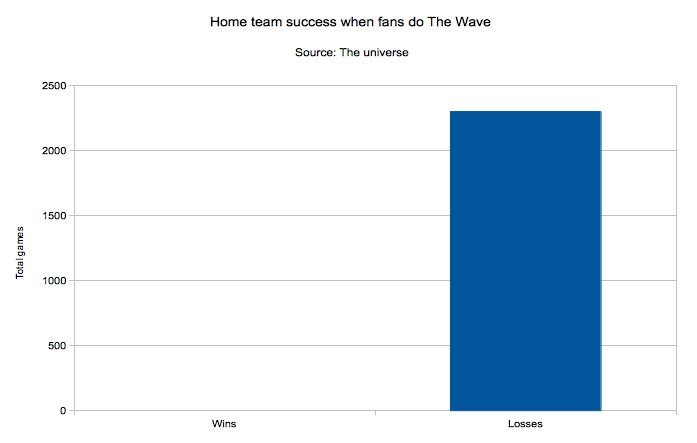 Good work, Dodgers fans! When it comes to the baseball gods, you basically tinkled on the Zeus statute and air-humped the Hera statue.

It’s another game where I’m required to talk about Brandon Hicks, cult hero, and I’m out of things to say. When the season started, he was a fringe guy, a player who had been on a handful of 40-man rosters in his career but unable to stick on one. After watching him for a month, I’ll be surprised if he’s not on a 25-man roster in five years. He has power, and he’s capable at second base. Dan Uggla made scores of millions doing that. Not that I’m suggesting Hicks is going to follow the same career path, but a poor man’s Dan Uggla would always do just fine for a rich man’s bench.

Hicks started the game looking like the winner of a radio contest. Oh, pleased to meet you, Mr. Kershaw. What an honor, Mr. Kershaw. Wow, that fastball is really fast, Mr. Kershaw! Ha ha, how do you do that bendy thing where the pitch curves and wiggles, Mr. Kershaw? Thanks, that was a lot of fun, Mr. Kershaw!

That’s a mighty fine looping curveball, Mr. Kershaw. Shame if something happened to it.

A full list of Giants to homer off Clayton Kershaw:

That’s about right. They should all get an orange jacket or something.

All I want is one game when Kershaw is completely off. One where he trips over the mound before the first pitch, commits six balks, and never has it. “Sorry, Skip. Just couldn’t find the zone today.” Just once. Just once, dammit. He never does.

It almost makes this kind of game even better, though. To win against a pitcher with his best stuff? Feels nice.

Angel Pagan’s defense before his injury was the kind of movie that critics didn’t get invited to. He looked like a left fielder who wouldn’t get there until it was too late. This year, he’s been mesmerizing, both with his first step and his range. Mesmerizing relative to our own expectations, that is, not the rest of the league. It’s not like he’s great out there, but I don’t think any of us saw this renaissance coming.

On Sunday, it was his quick, accurate arm that saved the Giants. I’m not sure what Lorenzo Bundy was thinking there, sending Adrian Gonzalez, who runs like he’s trying to leave an insecure manatee at day care, but I’m glad he did. In Bundy’s defense, it took a perfect throw to get Gonzalez. Pagan’s throw was perfect.

There should really be a Replay Porcupine mascot that comes out during lengthy replay delays and tries to touch the umpires with gigantic foam quills. Like, just comes out and chases the umpire not involved in the replay with something pokey. Now, that’s something Xfinity would want to sponsor.

Today’s game was a reminder that replay doesn’t always have to involve Phil Cuzzi-like, end-of-game debacles. With one out in the seventh, right after the Hicks dinger, Dee Gordon’s infield single was overturned by the umpires and justice. If Gordon reaches, he would have been super annoying. Do the Dodgers win if there isn’t replay? Dunno. But it’s possible. All we know is that they didn’t win. It was the third game out of their last four that they didn’t win*. That’s a .250 winning percentage.

Brandon Crawford didn’t start the game, and he still made the best defensive play of the game, nailing Hanley Ramirez with an impossible throw from deep in the hole to end that same seventh inning. We’ve talked about the arm and the range. We haven’t talked about Crawford’s ability to avoid wetting himself when the ball was hit by a fast runner. He takes his time, sets, and makes sure he gets extra on the throw.

I guess that’s a part of the arm tool. Should probably be a separate tool. The “Not Messing Yourself Under Pressure” tool. There are actually about 30 different tools — pre-play positioning, bouncy knees, willingness to dive, ability to ignore butterflies and focus on the game — and I’m pretty sure Crawford has them all.

Sergio Romo is probably a topic on his own tomorrow, considering we have a StoryStream™ about Pablo Sandoval, and I’ve basically ignored Romo’s pending free agency. But I wouldn’t be surprised to see Jean Machi adding to his career saves total over the next couple years.

You’re doing something completely different right now if my mom didn’t pass on her love of baseball to me. I was at the Joe Morgan game and the Bob Brenly game because of my mom, and it’s why I’m doing what I’m doing today. Happy Mother’s Day, mom.

You’re probably doing the same thing right now if my wife didn’t tell me once that Sergio Romo has an outstanding smile and firm buttocks, but that’s not the point. Happy Mother’s Day to my wife, too.