Share All sharing options for: The new Matt Cain

I think it was on this past week's ESPN Sunday Night Baseball broadcast when it was brought up that Matt Cain is throwing fewer and fewer fastballs than ever before. It's a pretty good point to note, and I thought ESPN did a nice job with presenting that particular data point.

Over the past few years, Matt Cain has started to change as a pitcher. More recently, he is throwing fewer fastballs than ever before. In fact, in 2013, among starting pitchers that threw at least 150 innings, Cain's fastball percentage (48.8 percent) ranked 73rd among a total of 90 pitchers. (I took out R.A. Dickey because that didn't seem fair.) The average pitcher in this sample had a fastball percentage of 55.8 percent. Cain is flanked by players like Eric Stults (49.1) and Anibal Sanchez (47.3). Not throwing the fastball doesn't necessarily equate to being a poor starting pitcher -- Adam Wainright and Madison Bumgarner hardly ever throw them -- but when he first came into the major leagues, Cain was primarily a fastball-first pitcher with a very good 12-6 curve and an evolution away from what got him to the big leagues is noteworthy.

Here's a graph, because I love graphs. 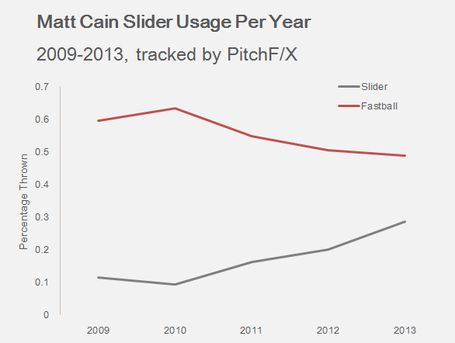 Data table for the pitch percentages:

Cain has lowered his vertical release point -- something I've written on a little in the past -- and while it's most assuredly related to throwing more sliders, I still don't know what to make of it. 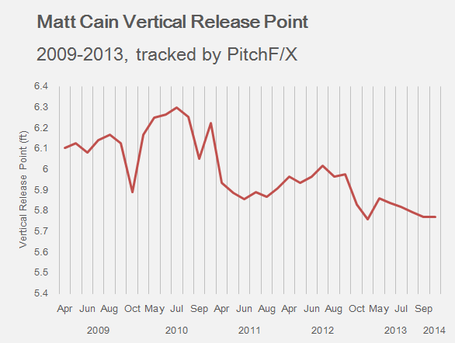 My general rule of thumb: I get a little hinky when pitchers start changing their arm slots, or anything at all, really. It's probably a bit of an overreaction, but pitchers are full of things like "tendons" and "muscles" and "ligaments" -- whatever those are -- that can go sproing at any moment, and change freaks me out.

Players rarely change the way they operate unless they feel it's to their advantage. Even though I tend to be a cautious person when it comes to this stuff, I'm a little anxious about it. Mostly because A) Matt Cain is a pitcher and they break all the time and B) the team will be paying him $20M per season until 2017, when they can buy him out for $7.5M if they so choose.

It's entirely too early to say that the changes that Matt Cain has made -- or is in the progress of continuing to make -- are Good Things™ or Bad Things™. At this point, they are just Things™. But, I think it's worth paying attention to.