He's back. Move over, Belt.

Share All sharing options for: Giants agree to minor-league deal with Travis Ishikawa

Travis Ishikawa is back. According to Zach Links of MLB Trade Rumors, the Giants have signed Ishikawa to a minor-league deal, and if he passes his physical, he'll report to Fresno.

Ishikawa, 30, hit .290/.389/.465 in 348 plate appearances for the White Sox and Orioles Triple-A affiliates last year. He was most recently with the Pirates on the major league roster until they traded for Ike Davis. There is no corresponding roster move for the Grizzlies yet, but I'll guess that the signing is bad news for 31-year-old Tyler LaTorre, who has been the Grizzlies' left-handed complement to Chris Dominguez at first base.

He is also a World Series-winning first baseman who took the greatest walk in franchise history. 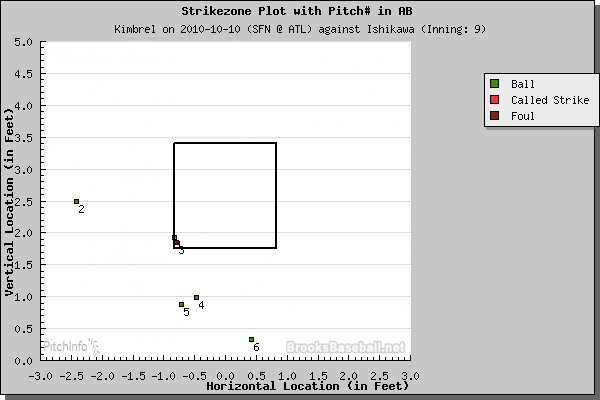 That was against Craig Kimbrel, who was (and is) just about the nastiest reliever I've ever seen. They look like easy takes, but for a youngish player in a stressful spot, Ishikawa gets credit for not swinging out of his shoes. After that walk, Freddy Sanchez singled, Aubrey Huff drove in Ishikawa to tie the game, and then Brooks Conrad happened.

Ahhh. But it started with the walk from Ishikawa, which inexplicably knocked Kimbrel out of the game. Good times.

Hopefully, we'll never see him in a Giants uniform again, because that will have meant something went seriously wrong with the major league roster, but in the event of emergency, he's not a bad player to have behind the glass.

Unless Pagan is going to miss time, and the Giants are going to put Morse in center, Belt in left, and start Ishikawa. You know, that's so crazy, it just might ...