History is repeating itself, by gum.

I can accept Tyson Ross shutting down the Giants. A big, hard-throwing right-hander with wicked stuff, exchanging body blows with Matt Cain … there's no shame in that. It's the kind of game you'd hope to show someone visiting from Scotland for his or her first baseball game. Every pitch was important, and the finesse meant as much on the power on both sides. That kind of game is why we spend our summers watching this stuff.

I have problems watching the Giants getting shut down by Clayton Richard or Wade LeBlanc or whatever. Not because the pitcher in question (fine, Eric Stults) isn't talented, but because there's no sadder fate than falling to a command-dependent lefty.

Watching a command-dependent lefty torment your team is like watching nine different people fall for a Wily E. Coyote trick. The sign reads "Frɘɘ birdsɘɘd!!!" and for two-and-a-half hours, you watch batters yell, "Whoa, free birdseed!" before getting hit with an anvil. A soft, dooky anvil. The Giants have never been rude enough to do that to other teams. 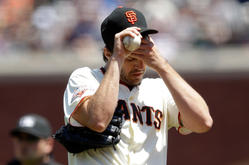 Well, okay, that happened occasionally. But Zito was also courteous enough to allow other teams to score tons and tons of runs against him when his dooky magic wasn't working. IT'S COMMON COURTESY. Stults hits 90/91 fairly often, so he's not quite Zito out there, but he still relies on command -- command and hitters getting themselves out. And that's a frustrating, frustrating pitcher to watch when things are going his way.

Stults didn't even have an Eric Gregg strike zone going for him tonight; it was a fair, modest zone. The Giants couldn't touch him.

Remember that time, way back there, when we thought the Giants were going to hit this year, when they were #2 in baseball in runs scored? That was fun. The team ahead of them was the Marlins, which made no sense because the Marlins can't hit. And that made you think, "Say if a team like the Marlins, who can't hit, is leading the world in runs scored, maybe the Giants can't hit, either, and we're just being fooled by small-sample gremlins." Then you ignored those thoughts because you have problems being honest with yourself. It's okay. We all do it.

Of course, if someone told you that Hunter Pence and Pablo Sandoval were going to hit like Neifi Perez all season, and that Buster Posey was going to hit like Bengie Molina, and that if Morse, Pagan, Crawford, and Belt weren't doing it, it wouldn't get done, you would have been less than optimistic about this season. You probably would have unicycled to Vegas to put money on them losing 100 games. Pence, Sandoval, and Posey need to hit for the Giants to win. Right now, they aren't. That will probably change. That had better change.

When it does change, it will be a barrage of glorious runs, and we'll be like Dusty Bottoms with the canteen:

We'll splash the runs about our face and gargle with runs. And when we throw the runs over our shoulder, wasting them because there are just so many runs, the April 19 versions of ourselves will be staring at us, horrified. We'll offer them lip balm. We'll have no idea.

So look forward to that. I'm sure that makes you feel much, much better about whatever that is we just watched.