Take out your Giants Loss Bingo card -- $34.99 at every Dugout Store -- and idly move your finger over the "Umpire screwed 'em" square. It's so tempting. So, so tempting. The strike zone sure looked atrocious. It looked like a Twisted Sister logo: 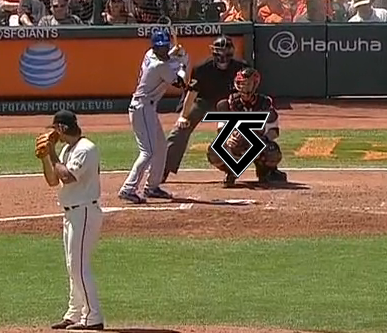 The Giants kept throwing above and below the pointy part of the "s." So close. The Dodgers kept getting the pointy part. Good work! They say that baseball game is like life, alright, and when one team gets an outside edge and the other team doesn't, that's the private school and rich parents of baseball.

Except most of those pitches weren't strikes. From Brooks Baseball: 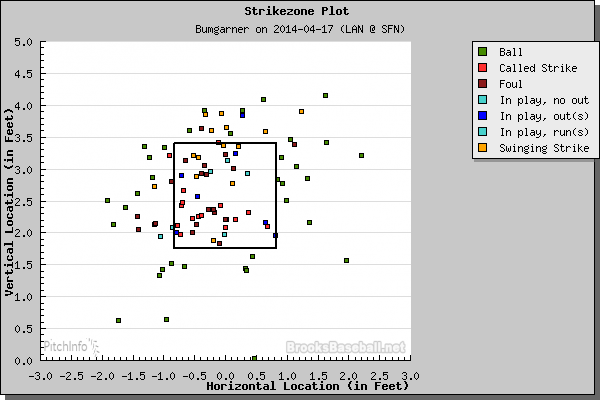 Again, that's from the catcher's perspective. Do you see those green squares on the right side, just outside of the box? Those were the pitches that pissed Bumgarner off. The lasers aren't infallible, but the chances are good that none of those pitches were a strike. They'll get called, perhaps more often than not with a left-hander on the mound, but that doesn't mean they're automatically strikes.

They should be called because Madison Bumgarner is better at pitching than the hitter is at hitting, so the umpire should err on the side of talent. But by a strict interpretation of the rulebook, possibly not strikes.

That means that there's another culprit to blame. And I think it goes like this:

If that sequence happens, you *might* be having a bad outing.  Which Bumgarner was. It wasn't a disaster outing. It wasn't anything but slightly off. But slightly off was enough. It's a danged shame because he looked so good in the first couple innings. Justin Turner made good contact on a slutter and sent it in the upper deck to the left of third base ... because that's about all you can do with it when Bumgarner's on. Either that or bust your thumbs open like a Toblerone. It looked like that was the Bumgarner we were going to see. It looked like that was the Bumgarner that America deserved.

Would have helped if the lineup could have done something that resembled anything.

You'll never believe this, but the Giants are averaging just 2.2 runs over their last five games.

You'll never believe this, but the Giants didn't hit a single home run in the Dodgers series.

It's still too early to point fingers -- Pablo's pressing! Pence is pressing! Belt is screwy! Posey is burdened by the extra 10 pounds of muscle! -- and it's still too early to draw conclusions. But that early-early April fervor about the Giants turning into the 2000 Rangers has been replaced with the early-April fervor of them turning into the 2011 Giants. Which makes more sense, really.

If I had to choose which one I wanted to watch, aesthetically, I choose the 2011 Giants. Better the devil you know ...

If there's any consolation, it's that Hyun-jin Ryu is a legitimately good pitcher. They weren't almost shut out by Jon Garland or something. Ryu had his command and stuff, and he's a tough cat to hit when that's the case. It's always tough to separate the this-lineup-sucks from the that-guy's-good when you're coming off a week with the former seeming far, far more likely.

In the event that Ehire Adrianza hits a walkoff home run, participants must:

I made this game up over the offseason, but I forgot to share it. Boy, was I nervous/excited when Adrianza came up as the winning run. Alas.

When he's right. Which he wasn't for most of last year. He was horrible all spring, too, so when Mike Krukow and Bruce Bochy were talking up Affeldt's return, it was easy to do some eye-rolling. He hasn't been that Affeldt for a while.