Doesn't that just sound nice? Say it a couple times.

Share All sharing options for: Giants beat the Dodgers

The Giants beat the Dodgers.

You call that meaningless? I call that a sentence full of meaning, overflowing with meaning. It's the most meaningful sentence in the English language, give or take. The Giants won on a bases-loaded walk, and Blake Miller scored the winning run, even though he's an extra making standard SAG wages, not a baseball player. 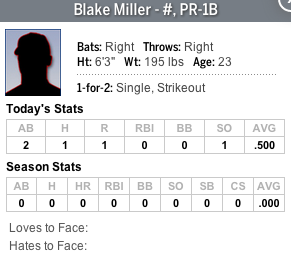 That's his profile on MLB.com. The pinch-runner part is listed first. He's in the witness protection program, and he doesn't love or hate anyone. I like this Blake Miller. He has style.

Vin Scully called the game on MLB.tv, and he spent a decent chunk of the first inning lamenting the Giants' choice to start Edwin Escobar. He called Escobar an A-ball pitcher (he made 10 starts in Double-A last year) and said the Giants signed him as a 16-year-old (he came over in a trade), then said it was disappointing that the Giants would start him on a Sunday in front of a sold-out crowd, as if it was somehow disappointing to watch the #2 prospect in the organization.

I love, love, love Vin Scully. But he was being weird. Escobar was the reason for tuning in. He's on the 40-man roster, he's a top prospect, and the Giants are chattering about him. You get the sense that he'll be in the majors at some point this year. This was my first chance to watching moving pictures of him; it was probably yours, too. Let's get to the hot Edwin Escobar analysis.

Excuse me waiter, but there's Jonathan Sanchez in my Edwin Escobar.

It wasn't what I expected. So many danged walks. However, that's not Escobar's modus operandi. He had fantastic control and command in Augusta, and he showed the same in San Jose and Richmond last year. If you're telling me that the pitcher we watched should have above-average command, well, that sounds ducky. I liked the offspeed stuff and the delivery, though you should know by now that I'm a better freestyle rapper than a scout.

I'll go on record and say that Escobar's career ERA with the Giants will be lower than Barry Zito's.

I guess I would have preferred Escobar to throw three innings with no walks and seven strikeouts, but there's no way to nitpick a win against the Dodgers, even if Blake Miller scored the winning run. He went to Western Oregon University, so as a proud Southern Oregon University Raider, I'm obligated to make fun of him. SOU rules, WOU drools!

Happy fun facts get back on the winning track, and they're now 8-1 on the season. Nice way to spend a Sunday.