I don't believe in spring-training games with meaning. But I do believe in omens. 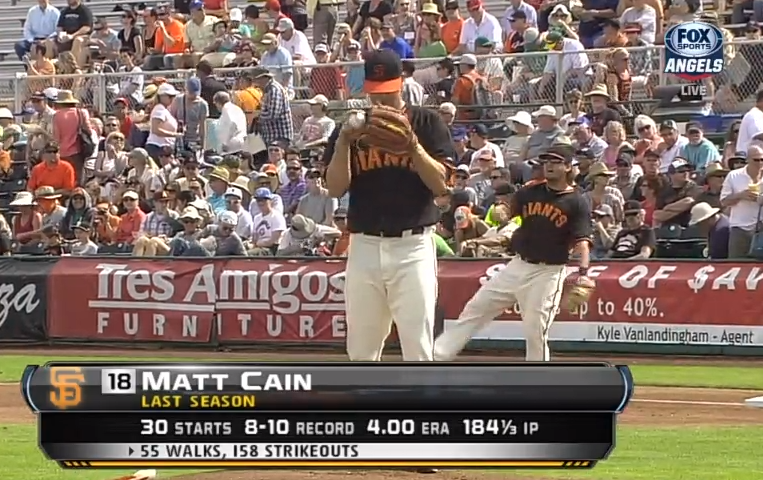 There! Just under Mark Minicozzi's glove! Someone put the name "Vanlandingham" on Scottsdale Stadium, and they did it on purpose! It's like an Easter egg that dorks who followed Lost too closely would pick up on. It means something. It could mean that this season is going to be a crushing disappointment.

Or it could mean this season is going to be hella wild.

You know? And that can be a good thing. This season could be wild, man. Omens.

The Giants defeated the Angels 3-2 on Wednesday, with Matt Cain pitching quite well. His curve looked sharp, and you don't need to stick a for-the-spring qualifier on that. There weren't any velocity readings on the broadcast, but I'll guess 98 or 99. He made some hitters look silly, and he gave up a hard-hit ball or two. He looked like Matt Cain. Better than you, in other words.

Let's keep the tally going as long as it's relevant:

Matt Cain helped. You know, they say the clean-shaven players are ahead of the bearded or goateed players this time of year.

But that's about it. There was baseball, and it was presented in moving pictures. Once again, Happy Fun Facts win, moving them to 5-0 this Cactus League, which is a great sign. Or "omen." Can't get enough of those.