He should be good if he's healthy. He probably isn't healthy.

The Giants signed Marco Scutaro to a three-year extension shortly after he turned 37. In hindsight, I'm not sure if that was wise. That was said with foresight, too, but now that we know Scutaro's vertebrae are basically Golden Grahams that have been in milk for a half-hour, it really doesn't look wise in hindsight. Confetti's a helluva drug.

Except it's not Scutaro's fault that Brad Hennessey bit every individual pitcher on the staff, infecting them with low-grade hennessosis. They probably shouldn't give that guy free tickets anymore. With the pitching in the toilet, Scutaro's contributions didn't mean as much, but the Giants got 547 plate appearances at second from a .297/.357/.369 hitter. That's quite nice, even accounting for the below-average defense.

It was rare, even. A list of 37-or-older second basemen over 500 plate appearances with an above-average OPS+:

There have been good 37-and-older second basemen. There have been second basemen who have played a lot after turning 37. But the middle of the Venn diagram is tiny. That would be six Hall of Famers, a Hall of Pretty Danged Good, and someone who played back when baseballs were made from a weevil-and-feather mash wrapped in reeds. It's freaky for Scutaro to be this good, this old.

And that's why, at the first hint of back ouchies, there's panic. Scutaro isn't exactly a pair of wax wings, as the Giants aren't going to plummet to the ground without him, but he's at least a pair of wax slippers, and the black ground is sorta hot underneath them. Not emergency-room hot, but when the slippers melted, you would do the oooh-aaahh-ohhh thing as you comically tip-toed to pavement in the shade.

It would suck without the wax slippers. Why did you pay so much for the wax slippers? Because the other options were mostly cactus slippers. The wax ones were comfortable. If you think this is a tortured analogy, wait until my 689-page book about the 2008 Giants, The Augean Roster, comes out.

If Scutaro weren't dealing with back pain, I would be rather optimistic, despite the age. That's because Scutaro has a crazy, hyper-efficient, I've-solved-baseball swing. Take a simple opposite-field single from last September:

Marco doing Marco things, right? But here's where the bat was before it left his shoulder ... 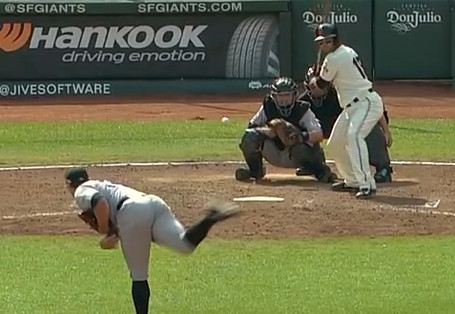 ... and here's where it was when he made contact: 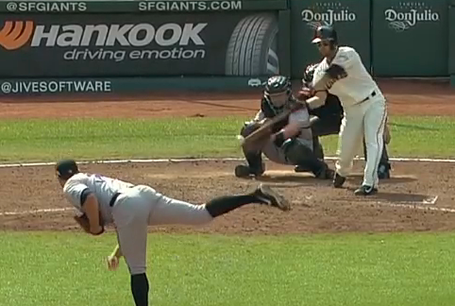 From shoulder to single in eight frames. That's freaky. It's why Scutaro had the lowest strikeout rate in baseball at 37, and it's why, history be damned, he could hit .297 every season until he's 50, as long as he's healthy.

Ah, there's the catch. Because I don't know what a malevolent back does to that swing. We saw some of it last year, when Scutaro was slumping, but you don't exactly rub dirt on a back to make it feel better. Back problems turn Hall of Famers like Don Mattingly into also-ran Hall of Famers, so what in the heck should you expect from a 38-year-old second baseman?

Not a lot. If the back hurts in March, it's not like the long, long, long season is going to help it. I usually dial it up to fanboy on these projections, but there has to be some sad logic included somewhere.

The good news is that Joe Panik hits .300 with a .380 OBP, picking up some third-place Rookie of the Year votes. The bad news is that's not really going to happen.