Barry Bonds and the ignore button of life

Share All sharing options for: Barry Bonds and the ignore button of life

Keith Olbermann had words for the Giants for inviting Barry Bonds to camp. Those words are on the Internet if you're intrepid enough to search. There's no sense in going point-by-point, and there's little value in a strident rebuttal. No minds will change.

Instead, allow me to riff a little. I'm almost certain I've mentioned this Far Side comic before, if not several times. It's a silly comic, but there's always been a life lesson in there, too. I think of that comic when it comes to people who purposefully don't search for context, who take pride in avoiding nuance. Not just with Bonds and steroids, but in politics, religion, atheism, Rush albums, whatever. But we'll stick with Bonds here because that's what you care about.

Here's how you should think of people who believe they can judge a person's character because of a decision to use performance-enhancing drugs. 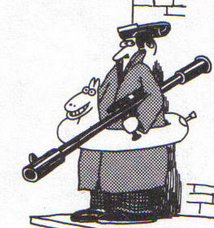 Do not touch. Do not engage. Nature's telling you something. Maybe not in a real-world setting, but certainly when it comes to baseball opinions. As soon as the context is gone, as soon as there's an a priori assumption that PED users were intentionally villainous, I'll mentally put a boot on the person's head for every subsequent baseball-related opinion after that.

How can people really not see the shades of gray? How can people not think back to 1998 and wonder what it was like for people to make the decision to use? McGwire and Sosa were gods. Baseball and the writers were looking the other way. When one writer pointed out McGwire's tub of androstenedione, he was shouted down by other writers. Let's go through the choices a player had:

Take steroids and listen to people cheer your accomplishments. Make more money. Satisfy that competitive mania that's driven every decision you've ever made.

Don't take steroids and keep baseball pure out of some sort of respect for the old days. Even though those retired players would have taken the drugs if they were available.

Which one will humans pick, and which variation have humans always picked? There wasn't a downside to PEDs in the '90s, other than testicles the size of roach droppings. Small price to pay, I reckon.

That doesn't mean steroid users are always excused. I'm conflicted, too. It was a total mess, and it still is. But there's always context, if not empathy, to look for. There's a reason players did (and continue to do) this. The Steroid Era wasn't a once-in-generation spike in players who tied maidens to train tracks. There were perfect conditions in place for the blight to spread, and that's what happened.

I should write a book about this. I'd call it "A Million Shades of Grey." It would sell so well, everyone.

When someone assumes every offender can be colored with one of the seven crayons from Crayola's Deadly Sins box, they're being naïve, at best. But it's usually a bazooka-boot-swim-toy gift for the rest of us. You get to ignore opinions and save time.

I disagree with Ken Rosenthal's stance on Bonds, but he acknowledges the context. I can respect the argument. It's not a simple topic, and Giants fans aren't exactly at their most rational when it comes to Bonds. I'm not sure if there's been a more reliable endorphin-distributor in my life, and my brain's all messed up when it comes to Bonds. So I don't take offense to articles that look at different sides before arriving at the opposite conclusion. It's the unambiguous folk who get ignored. They've given us the gift of time, the kind souls. I have too much to read and watch already.

It should be noted that a close relative to "all steroid users are repugnant" is "Shut up! Bonds is the best forever! BAR-RY BAR-RY BAR-RY!" I know a lot of us take pride in that as a response to the rest of the goofballs -- hellllllo, new site tagline -- but if you're sticking with that argument in a serious discussion about PEDs, you're a moron. There is another side about Bonds and steroids that people aren't crazy about, and those dissenters don't have to be miserable reasonophobes. Now you have the boot on your head, dummy.

Words about steroids. Dammit, it's 2014, and you sucked me back in again. Not sure why I even bother. I could have posted this and saved a couple hours.

ohhhhhh endorrrrrrphins, you are too good to me, you really are, ohhhhhhhhhh