Ryan Vogelsong pitched well. There was a tie game, which means your kid has to learn the metric system first thing in school tomorrow. Those are the important parts. You can go now.

But if you want to stick around, I can describe how well he pitched. My GIF machine is on the fritz -- really, who expects a computer to last two years? -- so I'll have to use words, like the baseball writers of yesteryear. Horrifying.

The two-seamer that Vogelsong threw tonight was …

The thing about Vogelsong's movement was that …

If there's an Updike quote that reminds me of Vogelsong's sinker, it's ... 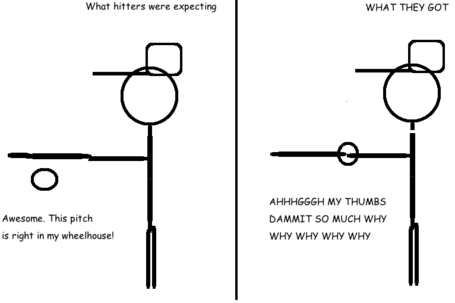 Vogelsong reminded me of the old Vogelsong, who was a benevolent Vogelsong. Don't make fun of me for paying attention to a spring game. I tuned in looking for movement and location, and that's what Vogelsong delivered. If there was another blowout, like in the Mariners game, tomorrow's post would have been about Edwin Escobar. Instead, lookie here, a game that reminded you why he was so good in the first place. Even the one homer he allowed was to a real hitter, Shin-Soo Choo.

The fastball was really, really running. It was sitting in the high-80s most of the night …

… but it was running. The curve looked splendid, too. In two weeks, this guy's going to pitch every fifth game. Watching a guy throw a spring quality start (4 IP, 2 ER or fewer), which I just made up, is always welcome with two weeks left. Nice game.

Even though the Dairy Queen goof and Captain Morgan made it close, Vogelsong takes the day, and Happy fun facts win again. They're 12-1, you know. Man, this season is going to rule.