State of the McCovey Chronicles, 2014

Share All sharing options for: State of the McCovey Chronicles, 2014

Hello. I'm the guy who writes most of this stuff. If you haven't noticed, there have been some changes around here over the last couple weeks. Conner Penfold is providing minor-league coverage now, getting great videos and interviews. A groug is starting the day off with links, making sure there's a place to hang out while I'm setting my hair for several hours. I found Chris Quick's login info, and I'm pretending he's unmurdered.

In addition, I've decided to make GameThreads for every spring-training game with an MLB.com broadcast. Then, because I'm a moron, I decided to do mini-recaps of them, because six solid months of recaps just isn't enough.

This has led to more threads than you're used to. So it would probably be helpful to lay out my goals for this site and talk a little. Here's what I want from McCovey Chronicles:

I've struggled so danged hard to find a balance with all of those, I really have. Over the last few years, I've been told dozens and dozens of times, through e-mail and in person, that the bulk of comments on every post make McC hard to navigate. I had a good friend tell me he would read everything above the "read more" break in the old format, but then had to give up because his computer wouldn't let him actually read more. I have people who constantly e-mail me their thoughts about the subject of my posts because it's hard to talk about the subject anywhere else.

Still, I didn't want to change. Part of that is my resistance to change. But part of me wanted to keep the same sports-bar feel of the site. You don't always talk about baseball at a sports bar. Sometimes you talk about True Detective or what you cooked for dinner. That's the beauty of it.

Over the winter, though, there was the epiphany moment. On January 14, minutes after publishing an unrelated post, I received an e-mail from the Giants with a list of non-roster invitees. I wanted to write something. I had time to write something. But I held what I wrote until that evening. It wasn't news anymore, and it looked like I was checking off an item on my to-do list, even though I read the e-mail within five seconds of receiving it. That decision hurt the efficacy of the site, but it kept the comments flowing. It's when I realized the breadth of comments was driving and shaping the baseball coverage, not the other way around.

Here's my proposal, then, and I think it's the best possible compromise. If you want off-topic all day, every day, that's what the URLgenio Velez and post-game threads will be for. In the other threads, the off-topic is still allowed, but it should happen organically.

An example of the off-topic that's always cool: 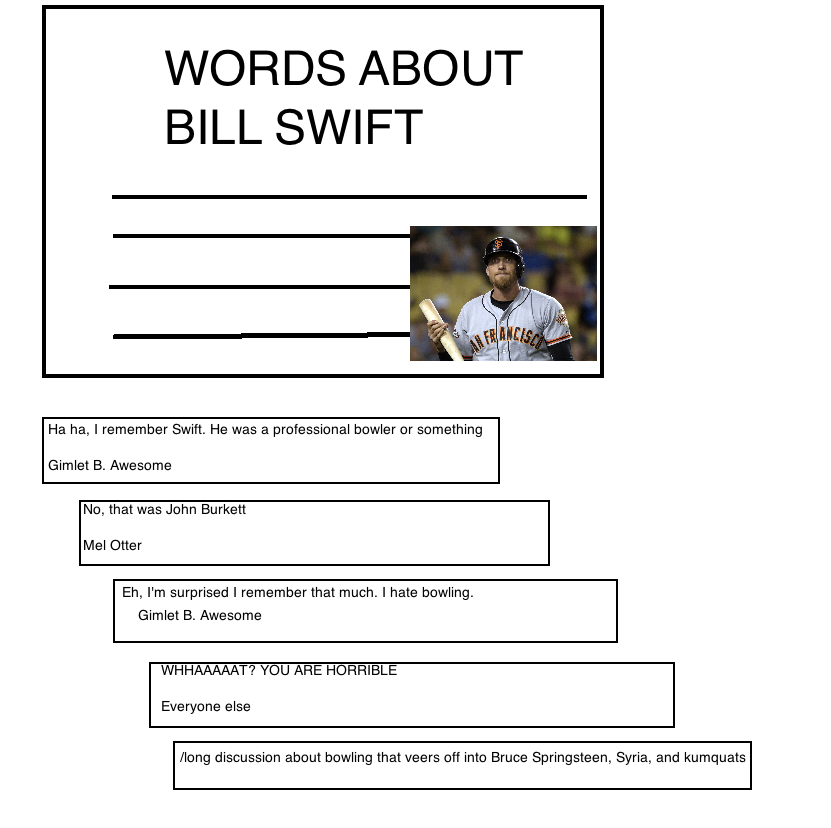 It would be horrible to change that part of the site. But here's what I'm hoping will be contained to the link posts and post-game threads: 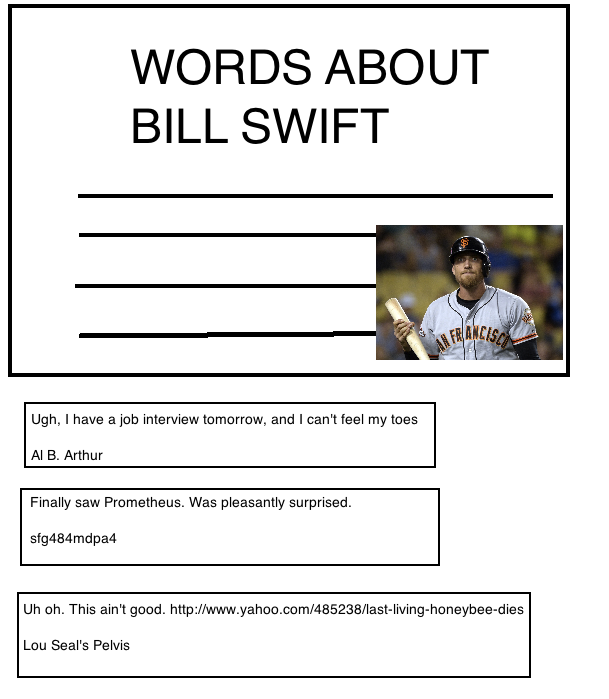 If this is the first site you think of to share that information, there is still a place for you. Off-topic non-sequiturs will live in the URLgenio Velezes in the mornings, and in the post-game threads after that. And, hell, talk about whatever you want in the GameThreads, I guess. But if you want to talk about specific topics related to the Giants, there is also a place for you, and that would be the posts about specific topics. Everyone wins, I think.

This is exactly how the site ran before this post, in a way. No one goes into Minor Lines and starts talking about harpsichords. But if the discussion veers in that direction, no one blinks. It's similar to that, now, except there will be a couple other posts per day in which that kind of restraint is requested. There aren't going to be bans for anything other than the golden rule, which is to contribute more than you distract, but I really don't think this is an unreasonable change.

I don't want 20 posts a day. I have trouble reading and following those kinds of sites. I don't want to build 150-word non-stories based on one player's tweet to another. But when Giants stuff happens -- when Marco Scutaro is moved to the 60-day DL, for example -- I want there to be a place for people to talk about it, which means I'll write a post on it. I don't think five or six posts a day is a big deal, really. A few minutes after publishing this, I'll publish a feature from Conner about Hunter Strickland's injury recovery, because that has to do with the Giants, which is the reason this site exists. I want to cover the Giants without restrictions, and I want to keep the community feel of this site.

I hope this change does both. Thanks.