How will Brandon Belt do this season? Danged good, if you ask this unbiased observer.

Look at this damned beard. 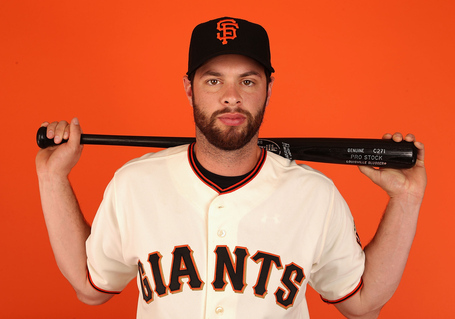 Look at that damned beard. You think it's going to be easy to do a projection like this? Brandon Belt is a hirsute warrior now, something between a sea captain wrestling a kraken with his bare hands and Kimbo Slice.

He hit 17 home runs last year, Belt did. Double that total. Look at that damned beard.

Unless facial hair doesn't really correlate with success. That's one theory, I guess. Let's look at Belt in the light of what we know, then. All you need to know about Brandon Belt, in two parts:

a. Brandon Belt is going to turn 26 this year, so he might not be a finished product. He could get better.

b. If Belt doesn't get better for the rest of his career, he's still a very good player.

Belt's OPS+ last year was 142. I'm still not convinced about the wacky park factors with AT&T Park over the last two years, but the mounting evidence is better than the anecdotes by now. For perspective, that's about the same as Jim Rice in his peak. You might not have any use for park-adjusted wizardry, but there's at least some statistical support that Belt is already an All-Star-caliber player.

Aw, heck, let's just use Baseball-Reference.com's handy tools to pretend Belt was a first basemen at Fenway Park in 1977:

But let's hold off on assuming that Belt is a star player kept down by the tyranny of tradewinds and park dimensions. Let's say that he was a good hitter last year, not great, and that the park factors/league environments are a touch overblown. The question now is if Belt gets better, or if he continues his pleasant, respectable ways.

He could get worse, too. Just because we have about 1,000 plate appearances with a .351 batting average on balls in play over the last two seasons, that doesn't mean it can't be a fluke. There could be more than a few ducksnorts inflating that batting average, which is helping prop up the OBP and overall value. Belt is one of the most aggressive Giants, which he gets away with because he also has a discerning eye.

The end of the Belt wars

Many nerds died. But we emerged on top. Well, Belt did. We're still nerds.

The end of the Belt wars

I'm not going down that road, though. Bearish Belt bullies bug me. He's either going to plateau or use his knuckly confidence to reach new heights. You have to choose which one.

I, for one, believe that players are not automatons, and that when a player changes something drastically -- like a batting stance -- and he starts raking immediately after, you can believe in the powers of the new batting stance. This is the same with players who get in shape and learn a new pitch. It's spring, live a little.

Under the same umbrella, I'll allow for some armchair psychiatry when it comes to Belt. Russell A. Carleton has been writing fascinating articles about how the next frontier in analysis is going to come by looking at players on an individual level, rather than by broadly comparing them to similar players in history. As such, I'll give Belt a little boost in this regard. This has to be the first spring where he feels like he doesn't have to prove himself, or have someone looming behind him.

Plus, I'm a fanboy. Like, a big, slobbering Giants fan, who uses these projections as optimism propaganda.

I'm expecting a little more. Not a lot more. But not the Belt we got used to last season, either.

It still isn't going to light the MLB-loving world on fire. Not in this era, and not in that park. We'll have to be satisfied in knowing that Belt is secretly quite good.

As a Giants fan I think we should trade Brandon Belt. Everytime he comes to the plate I EXPECT a strikeout! #c'monman