How will the hairy, glovey cult hero do this season?

This was scheduled to be a community projection for Marco Scutaro, but at the moment, my projection would look something like this:

But I don't want to be the homer projecting a 1.000 OPS, and two whole at-bats seem a little optimistic, so I'll just wait for Scutaro to play in a game before starting his projection. Instead, today is about the newly hirsute Brandon Crawford. Let's project what his 2014 season will look like.

You: Probably the same as last season, jackass.

That's just rude. There are two things to keep in mind with Crawford. The first is that he's 27 now, and that's when BIll James found that hitters peaked. Actually, that's not what he said, and other people disagree with the age-27 bit altogether, but I'm preferring to accept the popular misinterpretation. Age-27 magic, here we come!

The second thing to keep in mind is that Crawford has gotten better over the last two years, according to OPS+:

If you're into math, like I am, you've already spotted the pattern. 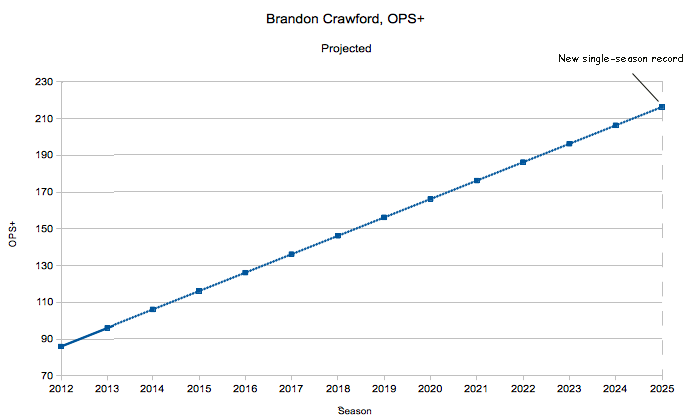 Seems accurate. But you know statistics. They can prove anything. Something about that career path doesn't seem quite right. We should probably investigate further. There are three options:

a. Brandon Crawford is actually the hitter who hit .234/.291/.327 in Triple-A, the universe is going to make a wild correction, and he's going to be awful.

c. Brandon Crawford still has latent projected-first-round-pick tools buried in his chest cavity, and he's going to morph into something more.

So ... the second one, then. The other two are equally ridiculous, by which I mean that they each have teeny tiny chances of actually happening. But, then again, that's the exact same chance I gave Crawford of hitting better than Neifi Perez in the first place, so it looks like he's full of surprises.

Hell if I know. I mean, wait, read this to find out.

He is out of surprises. He's going to have a low average and low OBP that aren't exciting, but once you account for park and the pitcher-friendly era, he'll be just dandy for a defense-first shortstop.

I found two. And I'm going to irrationally believe Crawford is going to turn into one of them.

The first is this guy:

Started off even worse than Crawford, but eventually turned into a high-OBP guy to help with his stellar defense, not unlike Omar Vizquel. Those stats belong to brand-name Omar Vizquel, Hall of Famer Ozzie Smith.

The second is this guy:

Not only did this guy add some OBP, but he found some power to boot. This would be Julio Franco. So, in conclusion:

1. Brandon Crawford is probably going to the Hall of Fame, like Ozzie Smith.

Ignore the Alex Cora comps on his Baseball-Reference.com page, and focus on the outliers. They're probably right. With them in mind, let's project Brandon Crawford:

I'm not really going to base my comp on those outliers, you fools. I have a reputation to uphold.