Giants to use metal detectors at AT&T Park

Share All sharing options for: Giants to use metal detectors at AT&T Park

The bad news: There will be metal detectors at every Giants game now. This will mean longer lines, and if it works properly, you'll never get to see how it benefits you. That's the Catch-22 of extra security measures, and if you've read the Politico tell-all from an ex-TSA agent, you might be cynical about the efficacy of an enterprise like this.

The Giants announced today that beginning this season, all fans entering AT&T Park will be screened with metal detectors. This complies with Major League Baseball's mandate that all teams begin using metal detectors by the start of the 2015 season.

The increased security measures are the result of MLB's continuing work with the Department of Homeland Security to increase and standardize security practices across the game.

"We believe that the addition of metal detectors will further ensure a safe atmosphere for all our fans who attend a Giants game," said Jorge Costa, Giants senior vice president of ballpark operations. "They will also allow us to speed up the pace of entry by reducing the need for handheld wanding and should create a more efficient and safer screening process."

The new safety procedures are as follows:

· If bringing in a bag, security will inspect bags as fans are in line approaching the gates.
Bag policies have not changed and bags not larger than 16"x16"x8" will continue to be allowed in the park. Bags will not go through the metal detector.

· Fans will be asked to remove all metal objects, including keys, coins and cell phones, from
their pockets before walking through a metal detector.

The gate turnstiles have been removed to eliminate a step in the entry process and to increase efficiency.

A limited number of metal detectors will be installed and tested at select gates at Scottsdale Stadium throughout Spring Training. This will allow the Giants to test the machines, train staff and familiarize the fans with what they can expect during the season.

The Giants set up this SFG Live ruse so I wouldn't be at my computer when they sent this press release. I see how it is. I'm like the nosey reporter in Bob Roberts, and they have to account for me. I get it. Although, because I had that thought, I found out the reporter from Bob Roberts was played by the actor who played Gus from Breaking Bad, so it looks like I win after all. I had no idea! I love stuff like that.

Something to note is that all teams are going to have to do this by next year, so it's not like the Giants are being extra cautious. This is an MLB thing. Any rage or stern words should be directed their way.

I'm not a fan of the new policy, though. It's like that quote from Benjamin Franklin "They that would give up essential libert ... aw, dang it, this means I can't sneak in my flask like I used to, right? Ugh, that's the worst. Their whiskey and Cokes are literally $10. Ten dollars. Just the worst."

Apart from the flask concern, though, I mostly agree with Rob and most of the commenters here. If there's an pendulum swinging between security measures and personal freedom, it's a little past where I'm comfortable. That goes for everywhere, not just MLB. But I write about baseball, so this is as much as I'll get into it. It's not the worst thing in the world. It's not going to make me think twice about going to the park. It's just an "aw, man, really?" moment. Maybe it'll be so seamless that you'll hardly notice. You know, like the airport. 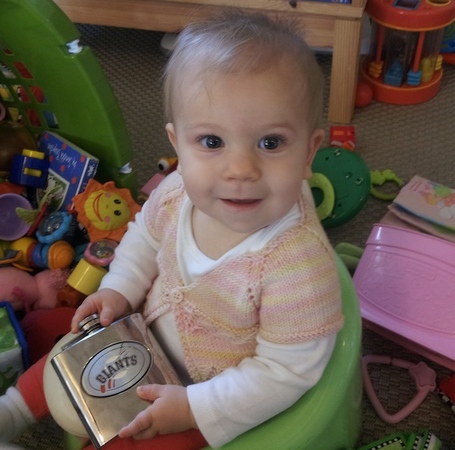