Joe Panik and Brandon Crawford combined for one of the best defensive plays in Giants postseason history. Here's an appreciation.

Share All sharing options for: The Giants won the World Series with the help of a wondrous double play

San Francisco already had "The Catch." Before that, we appropriated another "The Catch" without permission. We just love plays with names on them. It's been a while for the Giants, though. It's been a good, long while since an iconic defensive play took our breath away in the postseason.

Enter this sublime piece of poetry and performance art. It's The Double Play:

I knew it was a double play that would be caught with replay because Joe Panik made this face:

Panik doesn't make that face if he isn't sure. He's too trustworthy. It's like letting Brandon Belt call his own strike zone. Look at that face. He can't lie. Physically cannot lie. Panik is the same way.

Here's the magic of Statcast:

With the help of that video and the lasers responsible for it, all me to present the Things I Liked About That Double Play, Other Than the Obvious Part About The Two Outs:

1. The dive
Dan Uggla would have tripped over the bullpen mound going for that ball. Remember when the Giants acquired Dan Uggla and started him on purpose? The Giants won the World Series about three months later, and they did it in part because the internal option who probably should have been the starter out of spring training started a magnificent double play. He had to go 18 feet, five inches on a ball that was hit 106 miles per hour. He did it.

2. The flip
How many times have you seen a muffed flip like that? You can't blame a guy for trying, seeing as it's his only option. The flip goes wide, high, low, or it sadly dribbles out of the glove.

This one was high. Too high to get the double play, I thought at the time. But it was the only way they were going to get Lorenzo Cain. 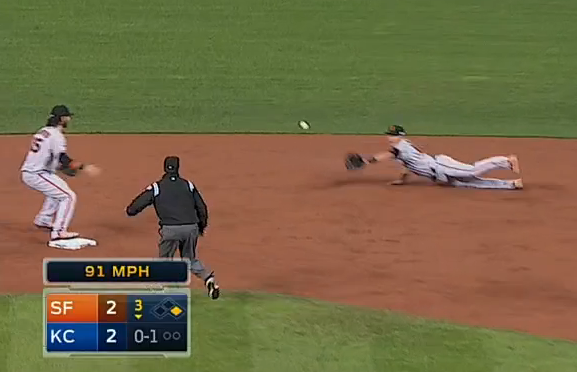 4. Crawford's throw
Perhaps the easiest part to overlook, but according to Statcast, Crawford got rid of the ball under a second and threw it 72 mph. He was basically flat-footed, and he threw it like an average high school kid's fastball.

There is a mini-controversy about the Royals not waving Alex Gordon around on the ninth-inning play that nearly set everything on fire. Except, even if Gordon was slowing down a bit, this was still the situation:

Crawford threw out Eric Hosmer in the double play with a 72-mph fastball after hopping 90 degrees to his left, releasing the ball from 90 feet away when Hosmer was about 10 or 15 feet from the bag. Gordon was about 100 feet away, Crawford was about 150 feet away, and he had time to set, wind up, and throw. You have to assume that Gordon is out by 20 feet with a regular shortstop handling the relay. With Crawford, there's just no shot.

If Royals fans want to be upset at something ...

5. The slide
No, no, no, Hosmer, what are you doing? There were people arguing that anti-sllders were perpetuating an urban myth, that sliding is mostly indistinguishable from running through the bag. Let's see what the lasers have to say:

It's official. It slows you down. Because of it, the Giants won the World Series by .02 seconds. At least, that's the narrative I'm going with. Maybe Hosmer doesn't score after getting on first with one out, but Affeldt throws more pitches. He has to pay attention to the runner. Belt's holding him on. Butterflies flapping their wings, man.

And that's awl she wrote.

Look at how that beautiful creature lived on the edges.

Have you lost respect for me because I'm pushing these things so hard? Tough. I haven't been on a proper vacation in years. SEND ME TO MAUI.

I can watch this play on a loop all day.

Anywho, say, did you notice that this is an image-heavy post? That's because I can't describe this play without sounding like an even more turgid George Will. The double play was the autumnal din of a sport's soul crashing headlong into the frozen bulwark of the offseason. It was a symphony of musical gadgetry, with each player specifically tasked with a niche that would be useless in the context of every other aspect in life. It was ... see? Can't do it. It brings out the thesaurus-laden hack in me that's yearning to break free.

It's not like this ended the World Series. It won't go down in history like "The Catch," not to anyone but us nerds. But what a play. What a staggering double play. It didn't have to be perfect -- note the high flip again -- but it had to be close enough. The Giants got it by .02 seconds. I want to see the Sliding Doors version of this play, but only if I can turn it off and return to this delightful reality.

The Giants won the World Series. This double play helped.