In the first game of the National League Division Series, the Giants defeated the Nationals, 3-2.

Jake Peavy was the star, as much as a pitcher grinding through 5⅔ innings can be the star. It wasn't Bumgarner against the Pirates, but it was damned good. It's not exactly an original sentiment to express thanks for him being around, but it's probably not common to think about the alternatives the Giants were considering. Kyle Crick and Andrew Susac for John Lackey. Other stuff for Justin Masterson. There were so many ways to screw the deadline up, yet they came away with at least a playoff appearance and a playoff win.

Let us talk about Peavy. Here's what he does after important double plays.

This is because he's a freak. It's like he has one of those hats with the straws and two cupholders, except he fills it 32-oz. coffee cups. He also eats 5-Hour Energy capsules. Doesn't even bother to unwrap them and drink. Just chews on them. Calms his nerves.

In the first inning, Peavy was catching too much of the plate. You'll read all sorts of superlatives and praise, most of which Peavy certainly deserves, but that's because we already know how the episode ends. In that first, though, he left pitches up to Denard Span, to Anthony Rendon, and to Adam LaRoche. None of them hurt, though, and Peavy settled in after that. He was a grinder in the Ryan Vogelsong mold, and he was delightful.

Peavy's biggest struggles came because of the film-covered eyes of Laz Diaz, who doesn't realize that umpires are calling more low strikes these days, not fewer. Ever since WebTV went away, he literally doesn't get the memos. Literally. He probably wonders why the other umpires go over by the dugout and put headsets on, but he's too self-conscious to ask.

In the fifth inning, Bryce Harper hit a ball off Brandon Belt's glove for the Nationals' first hit, and he tried to fire up the crowd.

He didn't try to fire them up. They started going nuts on their own. It was barely a hit, but it was a enough to make everyone realize that the Nationals still had a very real chance to win. The fans stood. Everyone waved their white towels, which came with detailed instructions.

REMINDER: Let those rally towels fly high when the #Nats are batting, but try not to wave them while the team is in the field.

It felt like a big moment. It felt like something that could be followed up with another single, at which point it would become a thing, and things are usually awful and overrated.

Less than a minute later, on the very first pitch, this happened:

My word, what a poke to the eyeball. They didn't even get a chance to do that thing where every ball makes them get louder and louder. One pitch and Peavy got to act like a freak. He was awesome. He pitched well. All that needed to happen was for the bullpen to hold their ground.

After Peavy left, Bochy brought in Javier Lopez who is no longer magic. This could be a big deal in the playoffs. It's so much nicer when he's magic. He's allowed just one run in 14 playoff appearances for the Giants*.

* Fun fact: Lopez did not appear in the 2012 World Series, possibly because Prince Fielder was dizzy and confused for all four games.

Lopez walked LaRoche on five pitches, coming close with just a couple. He's been supremely unreliable over the last month. Bochy needs to be careful with him. The walk loaded the bases for Ian Desmond.

Bruce Bochy did the right thing and called on Hunter Strickland, a rookie with exactly nine innings of major league experience. He struck Desmond out on four pitches, all of which were unhittable. Desmond was looking fastball, but he was late. Every danged time. Late late late.

Snrrrfp. That went 455 feet, but it seems like it went longer. Fine. Anyone can hit one if they close their eyes and get lucky. But that's the last time that ...

Frrnnnnff. Okay, so we've learned that Strickland isn't magic if he's always over the plate. That seems good to know going forward. Luckily, Strickland won the matchup against Desmond, which was the most important of the game for any pitcher on either team.

Jeremy Affeldt got the final out of the seventh. And the eighth was all Sergio Romo. Here's who he faced, in order:

Other than a couple of drifty sliders, Romo did go get 'em. Rendon dribbled a ball through the right side and Werth fisted one just over Pablo Sandoval's head. Two on, no outs, with three power hitters (two lefties) coming up.

LaRoche popped up. Desmond looked like B.J. Upton with vertigo. Harper grounded out. No problem.

I mean ... yeah, technically. It was certainly the most peaceful inning. But other than the first batter Strickland faced, no pitcher had it harder in the game than Romo. I hope no Giants pitcher has it that hard for the rest of the playoffs.

This time next year, we might think of Joe Panik as a useful player, not a demigod. He might have a full season's worth of plate appearances and hit .270 or something. It's possible.

Until then: demigod. A fine addition to the pantheon of contact-hitting second basemen who come out of nowhere and lay waste to postseason opponents. I don't think even Dan Uggla would have been enough of a drag on the team to let the Brewers catch up to the Giants once they started their death spiral, but admit it: You're glad Panik is on the team instead of Uggla now.

Here is a picture from the game: 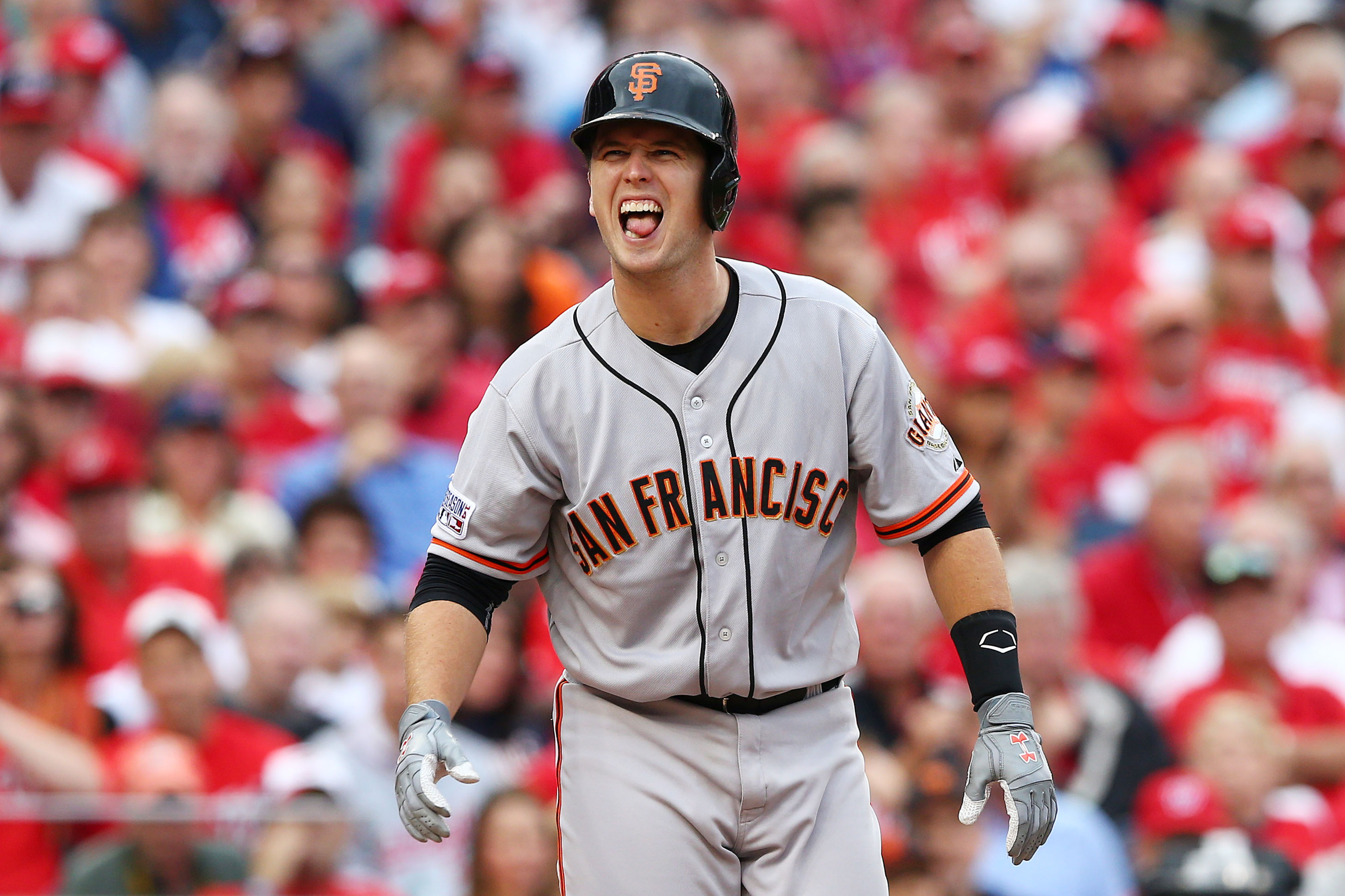 Here is another picture from the game: 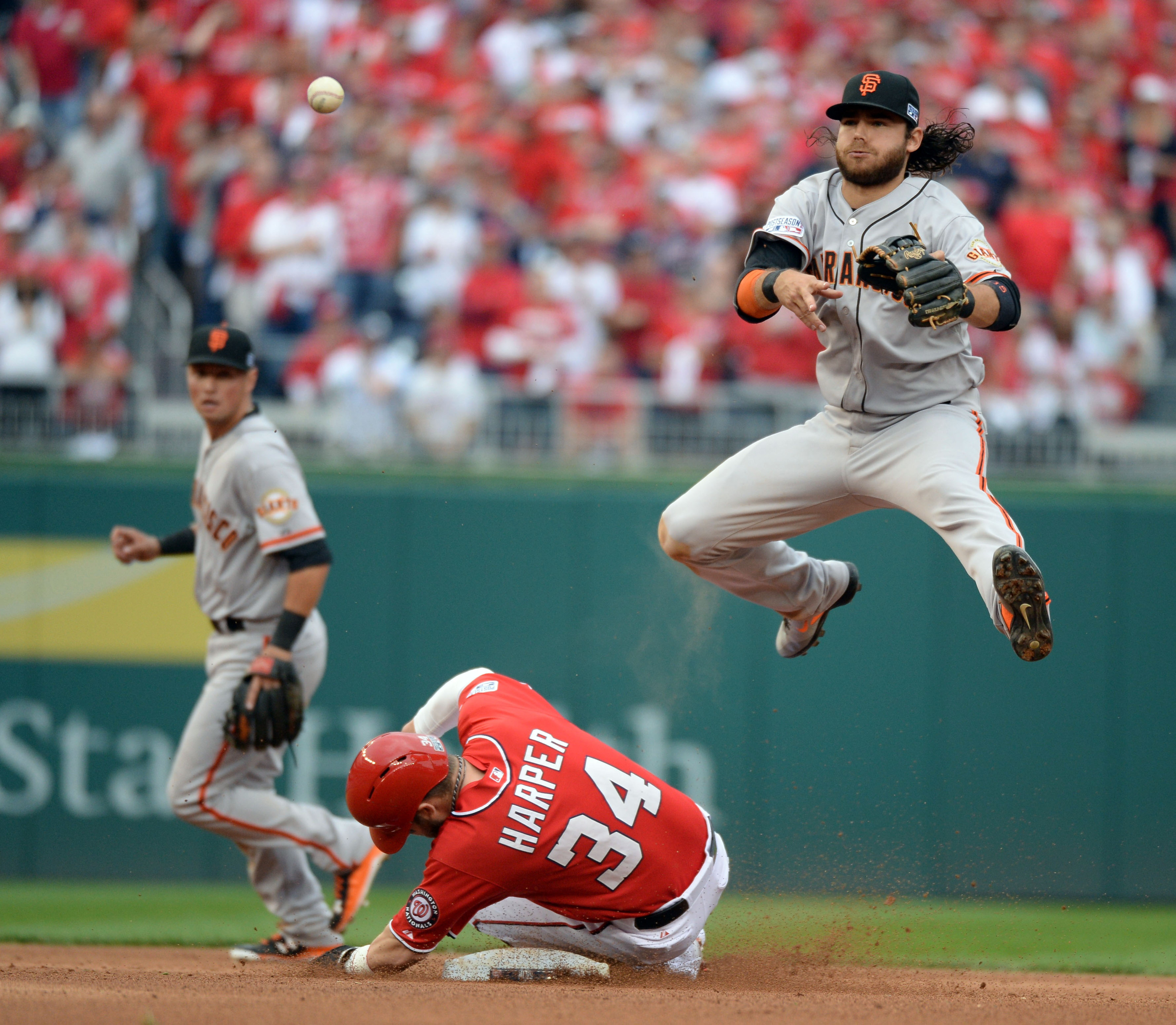 That looks like a fun game with several funny faces. I'm glad I watched that game.

In the ninth inning of a one-run game, the Nationals used a pinch-hitter. They had already used their main bench lefty, Nate Schierholtz, already, so they turned to switch-hitter David Espinosa, who grounded out.

Scott Hairston was not involved.

Scott Hairston could have been involved.

Scott Hairston is not on the 25-man roster.

Matt Williams: Making you feel better about the Giants' chances to win since 1987.