I mean, technically it's true.

Carlton Fisk waving the home run fair in the 1975 World Series is one of the most indelible images in televised baseball history. He hits it ... he's jumping ... he's waving ... the crowd's going nuts ... you've seen it 100 times. It's featured in an Oscar-nominated movie. It was the most important swing of the bat in 50, 75 years for a franchise desperate for a swing like that.

In the next game, a Game 7, the Red Sox went up 3-0 in the third inning. Can you imagine the momentum? Can you imagine how loud Fenway Park was? It was going to happen. It was fated to happen. Then the Reds hit a two out, two-run homer. Then they had a two-out single in the next inning. Then they had a two-out single in the ninth inning. When all of this was going on, not a single Reds player was thinking, "But, wait, last night sucked!" I've never faced a fastball faster than 80 mph in my life, but I'd like to think I have an idea of what they were thinking as the came to the plate. Look for your pitch. What's this guy got ... fastball, curve, slider? Look inner half.

That's what the Giants were thinking in 2002, right until Kenny Lofton flew out to end the World Series. Baseball crap. They lost because their baseball crap was weaker than the other team's baseball crap. They didn't lose because of what happened the night before. I don't know if Livan Hernandez had heard a single Sandfrog song, even if he pitched like the entire album.

And lookie here, the Giants aren't coming off a Game 6 loss like 2002. This one sucked -- one of the most deflating baseball games we'll ever watch, if we're lucky -- but it wasn't the most deflating. It wasn't that other one. The one with the 5-0 lead. The one that felt like a sure thing. The one that was going to break the curse, the drought, that made you wonder where the most convenient place to buy champagne was. This Game 6 wasn't that Game 6.

Don't like me talking about that Game 6 of the 2002 World Series? Grow up. Tim Hudson isn't thinking about it. He was busy not appearing in Moneyball. He probably doesn't even know who won that World Series off the top of his head, not without a few seconds to think. No, if the Giants are going to lose tomorrow, they'll lose because of baseball crap. They'll lose because they can't hit Jeremy Guthrie, or because Hudson explodes, or because the Giants are 0-for-15 with runners in scoring position. The Royals will win because of their superior baseball crap.

Or, here's an even better way to put it: I have a proposition for you.

The Giants will have a chance to win a World Series. They need to win just one game. It's a Game 7. It's against the Royals, and Jeremy Guthrie is pitching.

Let me travel through time and offer this proposition to folks from the past.

Here's you, in March:

You, in May, when the Giants were the best team on the planet:

I'll take it. Yes, these are good odds.

You, in July, when the Giants kept slipping behind the Dodgers, giving away an insurmountable lead:

You: These dicknoses? A win away from winning the World Series? Ha ha ha, yeah, here's my baby. You can have it.

You: Stupid thing can't even talk yet, honey. I know what I'm doing.

So I don't give a shit about momentum. If the Giants lose, it's because they're going to play like complete dumbasses or because baseball is on peyote. That's what you have to worry about. Momentum. Pfffft. Worry about baseball.

I'll take a Game 7 against Jeremy Guthrie, acquired for Jonathan Sanchez because baseball is trolling us. That's because there's still a chance that we're trolling baseball. That's because it's a better chance than the other 28 teams have.

If Jake Peavy can't be trusted in a World Series game -- and, to be fair, it's not like he looks like a good pitcher while he's getting knocked around -- then I don't see what the point is with bringing him back. The Giants can gamble on stopgaps. The Giants can trade for stopgaps before the trade deadline. Peavy did just dandy for the Giants after coming over in a trade. He's a part of this. He was a fantastic addition. Even if Edwin Escobar wins three Cy Young Awards, I'm not going to complain about that trade.

Well, okay, if he wins just two Cy Youngs, I'll be cool with it.

The deal is already a success. The Giants are in the World Series. Peavy helped get them there, even if only in a butterfly effect way. Wheeeee. But there's a limitation, here. The 2010 Giants could pitch deep, so deep, into games. The 2012 Giants weren't the same, but they had a chance to pitch well into the late innings. Peavy is the personification of the '14 Giants postseason run. Give us five innings, and hope like hell. I don't know what's happening, but hope like hell was crazy enough to work until now. They need just a little more crazy.

If the Giants don't win, this is a pretty powerful image. 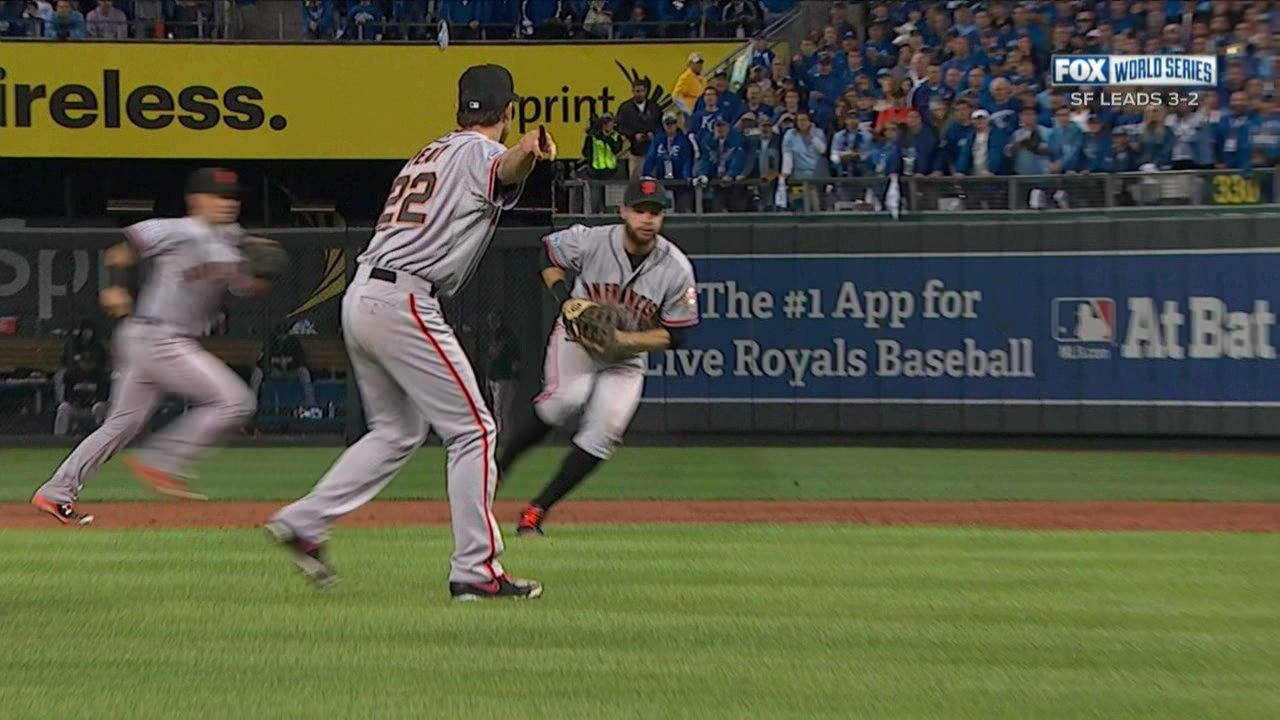 Peavy, pointing to home for no good reason. Belt, confused, like the rest of us, not reacting quickly enough to make everything better. The Royals scoring more runs than the Giants could possibly hope for. They scored more runs there, more runs there. So many more runs. But that play, and the nonsense hits around it, felt important. How many times did "experience" get brought up in the World Series previews? There's your experience. There's a guy with 346 career starts pointing at a ghost runner crossing home plate. There's a guy with a ring listening to him before realizing that guy is not in his right mind. Experience is something you bring up when you think these guys have played 4,000 World Series games.

It was all nonsense. So was this game.

Game 7, everyone. And a Tim(s) shall lead them.

Then Buster Posey hit into a one-pitch double play. Oh, how I wish I had a catapult for all the people complaining about Posey -- not the at-bat, not the result, not the decision to swing at that specific pitch, but Posey. Literally Buster Posey, the player responsible for everything good over the past five years, give or take. Good gravy.

Here's the official philosophy on swinging at the first pitch after a pitcher has walked the bases loaded:

It had better work.

But I prefer the option of swinging to a default, ironclad, no no no philosophy. Wait for a pitch. If you get it, get goofy with it. I disliked the way Posey swung at the pitch. He was late, so damned late. It wasn't a bad pitch to swing at, though. I have no problem with him thinking, "If I get a pitch to hit ... if I get a pitch to hit ..." It was up. It was a pitch that Posey has clobbered in his young career.

For whatever reason, he biffed the swing. Happens. Baseball! But I'd rather have my cleanup hitter willing to do good things in that situation rather than wait for the good things to come to him. Sure didn't work out that time, though. Sure didn't.

There's talk about Madison Bumgarner starting Game 7. It's not coming from the Giants, mind you, because it's absurd. I know Bumgarner is up there with Winklefoot Cramsy and Dental Fonger on the all-time list of best World Series pitchers, but that doesn't mean anything about Game 7. I've seen him not be magic. You've seen him be not magic. He gets in these weird spots where he's too around the plate. That happens with normal rest. We're talking about two day's rest to start the most important game of his career.

I don't know what would happen. But I've seen the best pitchers of our generation completely flop on three day's rest. I'm entirely more comfortable with Tim Hudson.

I'M NOT AT ALL COMFORTABLE WITH TIM HUDSON.