The Giants guaranteed a return to Kansas City, defeating the Royals 11-4. Had it all the way.

Share All sharing options for: Giants explode for 11 runs, even World Series

The cynicism of Giants fans isn't something that makes sense to other fans. The Giants have had an awful lot go right for them in recent years, and other people want to punch you when you complain about anything. But it's hard-baked into the collective consciousness, something that can't be scraped off with a little success. It's Charlie Brown sitting on the curb, Candy Maldonado turning a catch into a triple, Russ Ortiz getting the game ball. Don't bother explaining it. Don't bother apologizing for it. Just laugh at yourself when you're so danged wrong.

The 2014 season ended when Ryan Vogelsong didn't step on first base, and we all knew it. It was time to think about the 2015 roster. I had some ideas, see, and they involve ...

Praise for the hitters first. Curious glances regarding the pitching choices second.

The Giants scored 11 runs, the fifth time they've done so in postseason history. They didn't come on a pair of grand slams or in a salacious dinger fest. Call them Creedence Clearwater Revival in the mid-to-late '60s, because there were so many singles th ... no? Fine. There were a lot of hits. Singles mostly. The Giants had more hits in just one game in their postseason history, and Babe Ruth played in that one.

It wasn't just one player who did the bulk of the damage. It's time to celebrate each run individually, like the special, unique snowflakes they all are.

Giants lead, 1-0. They are invincible.

2.
Matt Duffy led off the inning, pinch-hitting for Jean Machi, who just had to get the damned pitcher out and barely freaking did it. Duffy singled. It's going to be so rad to watch him hoist that NLCS MVP trophy over his head in 2016. Blanco got him over with a semi-clutch grounder. Posey got him in with a two-out single. He still doesn't have an extra-base hit this postseason. Funny how a game like this makes you not care. Until the next game starts.

This run prevented a shutdown inning, which was something the Royals desired strongly.

3.
Joe Panik continued to impress against left-handed pitching, rapping a double. Buster Posey played small ball because the Royals don't get to come to OUR HOUSE and manufacture ANNOYING, ILL-GOTTEN RUNS better than the resident National League team. Hunter Pence scored the run that was going to allow Wade Davis and Greg Holland to look good again.

This is Hunter Pence. 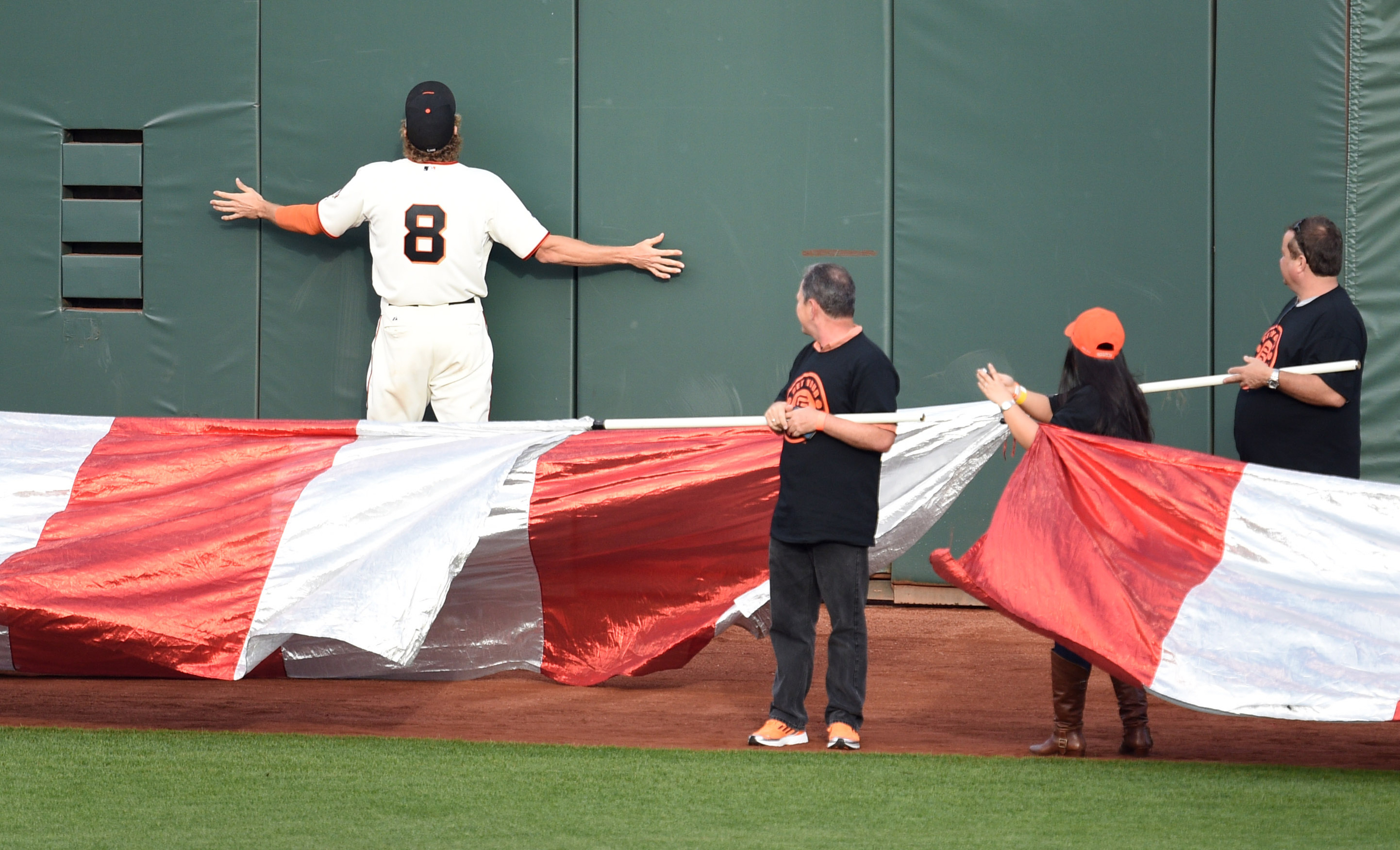 4.
Except the Giants actually tied the game right there. Danny Duffy came in to turn a vomiting, left-handed hitter into a vomiting, right-handed hacker. I don't know how it worked, but it did. Duffy couldn't throw the ball far enough out of the strike zone; it was as if he was facing a normal hitter. Pablo Sandoval singled up the middle.

"Just go up there and catch the ball, Juan."

"Catch the ball with your bare hand and throw it back at the pitcher. Play some defense, Juan. You can do it."

"Skip, still not sure which end of this here bat I'm supposed to grab. Little help would go a long way."

A double play ruins everything and loses the World Series. He hit a sacrifice fly that was a normal center fielder away from being a single.

5, 6.
It all started with a Joaquin Arias single, he typed for the 600th time in his life. They'll find splinters from the bat in Salem, but don't be a lawyer about it. Blanco screwed up a bunt and it all worked out -- because that's what he does, and it's the greatest card trick in baseball.

With two outs, though, Sandoval had to hit right-handed again. Brandon Finnegan and Salvador Perez figured there's no way Sandoval was looking for a fastball on the first pitch, and he took it back up the middle. The Giants led for the first time since the first game of the World Series.

7.
Brandon Belt got the second two-out, run-scoring hit of the inning. "He'll never look for the fastball in the middle of the plate." It was at this point I started to feel this weird, sticky, viscous fluid seeping behind my eyes and into my brain. What in the hell? Optimism? Who let him in here?

8.
Brandon Crawford chopped one off the plate. It was the farthest he's hit the ball in the series. We'll take it. Michael Morse -- who ate Mark McGwire's eyes after a bar fight and now owns his powers of sight -- walked in a great at-bat. Gregor Blanco then bunted, so good things happened.

Seriously, we have the 1) magic bunt of the 2012 World Series, the 2) error-provoking bunt in the NLDS against the Nationals, the 3) screwed-up bunt from earlier in this game, and now 4) the perfect bunt that becomes another run-scoring error. Blanco should bunt six out of every seven plate appearances. 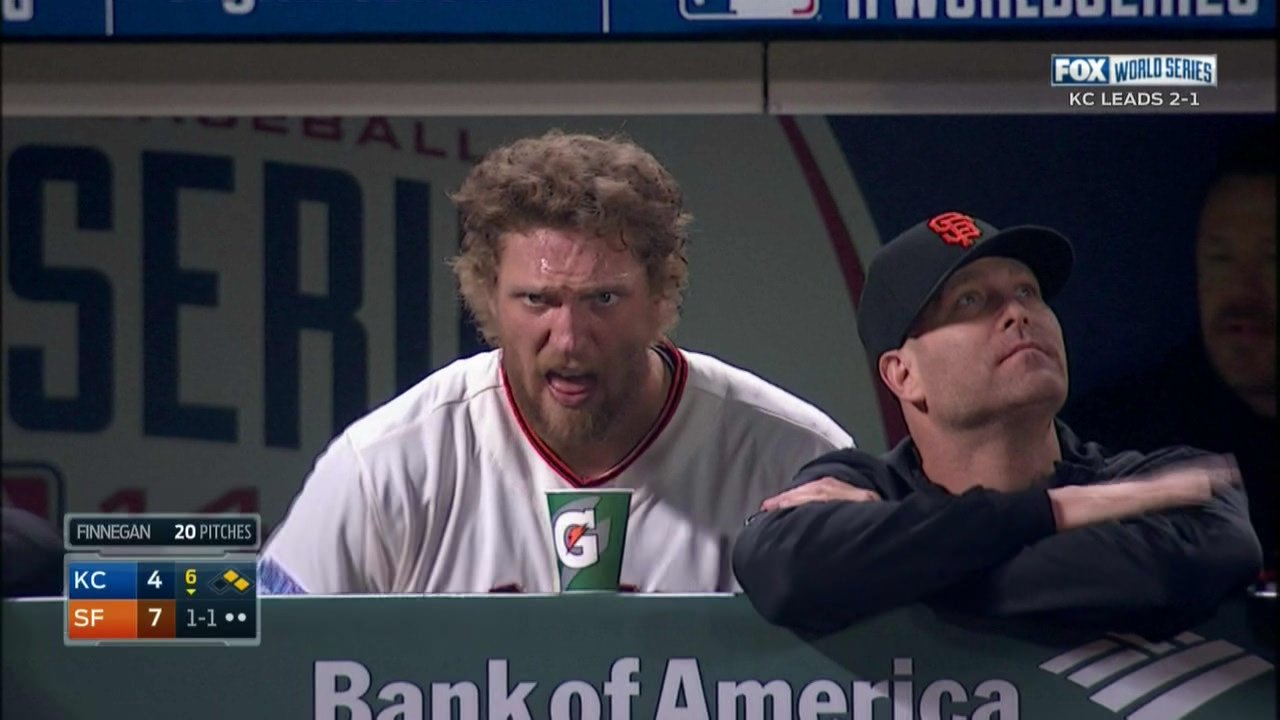 I do enjoy him on the Giants.

Everyone in the lineup scored a run or drove a run in. Everyone in the lineup got a hit, including three different hitters in the ninth spot after Ryan Voglesong left. A gentle reminder that the Giants are in the postseason because of their lineup, for the most part. It seems weird to process, but this is as good of a lineup as the underrated goofballs from 2010 and 2012. They're just down an ace or two, so it's a little sketchier.

Game 4 felt outstanding, though. Just think about how you'd feel if they had the tough game tonight and the thrilling come-from-behind win last night. You would be all grumpy and worried because Bumgarner couldn't win the World Series at home.

Yusmeiro Petit is a legend, an epic poem. He will be the subject of a Ken Burns documentary one day, and Daniel-Day Lewis will portray him in the movie. For the second straight appearance, he came in and made sure the other team didn't score another run while the Giants whittled away at the lead. This is fantastic, this niche he's carved for himself.

Except ... hold on, I have something caught in my throat ...

Which is to say, I'd rather see Petit start over Vogelsong. You saw the power of balls in play with Vogelsong's nightmare inning. The contact was weak, but the runs were real. Petit has to start over Vogelsong because he misses bats. Except, whoops, that's not an issue anymore. Vogelsong's spot in the rotation will never come up again. The Giants made the wrong decision, and it worked out like crazy. Man, that has to be annoying to watch. For you, I mean. For the other half, too, I'm sure.

This is a bad double play attempt:

This is a good double play attempt:

There will be baseball on Tuesday.