Where did Buster Posey's power go?

Share All sharing options for: Where did Buster Posey's power go?

This was a good day:

The Giants were behind early because they were a bad team that was going to lose the Wild Card Game. Buster Posey helped them out of that. On the last day of the regular season, the Giants beat the Padres with the help of a Posey dinger.

It's not that Posey is hitting horribly. He has a .288 average with five runs batted in, though his Win Probability Added suggests that he's done more to hurt the Giants at the plate, even after considering his late-inning work in Game 2 of the NLDS. Like several other players on the team, the Giants are here despite his offensive help, not because of it.

What's up with Posey?

And done in one. But it's an off day, so there's space to fill.

Possibly! Long, long season, after all. Except Posey has the strange Even Number Nonsense habit of getting stronger and stronger as the season progresses. It's not that he couldn't be tired because he was hot in September, just that there's no supporting evidence behind this assertion.

Note: At this point, the author actually had the bright idea to record and edit every Buster Posey at bat this postseason, spending an incredible amount of time creating a 5 GB, two-hour video that QuickTime won't let him save or edit. So it just sits there, in limbo, completely useless and eventually doomed.

DAMMIT SO MUCH. I AM SO ANGRY. I WILL KILL YOU. I'LL KILL ALL OF YOU.

Anyway, so I just watched every Buster Posey at-bat of the postseason, and I can tell you this much:

Wait. That's, like, a quarter of the projected 25-man roster before the season started. 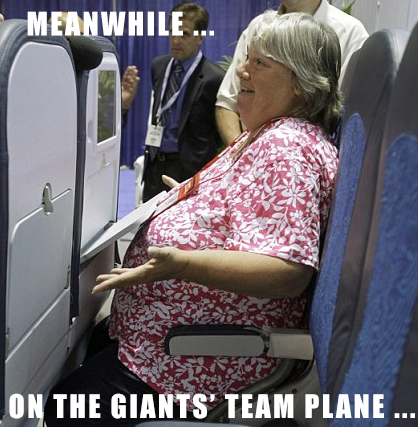 Right, well, what's done is done. The back problem was the excuse for the first half with Posey, though. He had a brilliant second half, enough to pick up some top-5 MVP votes, I reckon. Every player in both dugouts is dealing with something that we don't know about. October is ruled by ouchies. It's possible that Posey is dealing with a flare-up of back pain, and it's preventing him from getting even one cheek into it.

In 50 at-bats, Brandon Hicks can be a power god. In 50 at-bats, everyone can freak out about Edwin Encarnacion's power, only to have him more than make up for it. I really, really wanted you to see all of those at-bats, dang it, but they're just staring at me in save-edit limbo. Part of the problem is that Posey's faced exactly three left-handers all postseason (Gio Gonzalez, Matt Thornton, and Marco Gonzales). The other part of the problem is that when Posey's hitting it hard, he's lining it. That could be a problem with his swing. It's probably just a hazard of hitting a round ball squarely with a cylindrical stick.

You might have other ideas. For now, I'm convinced that Krusty is coming.