The lead came early, and the Giants never relinquished it. Three more wins, you bozos. Also, this is the first Tech N9ne picture at the top of a McCovey Chronicles recap. Hi, Tech N9ne!

Share All sharing options for: Giants storm to Game 1 victory behind Bumgarner, Pence

Before the Kansas City Royals -- the incomparably hot, momentum-brined Royals -- could get an at-bat, the Giants had scored three runs in the World Series. After the days and days of waiting, which were then funneled into the hours of waitingwaitingwaiting just before the game, the quick start made everyone feel like an anthropomorphic valium pill was giving them a full body massage. Ahhhhhh. Ahhhh. Ah.

The first one started with Tim Lincecum inspiring a million uninspired pot jokes when he turned a rundown into a runback. It was one of the biggest oh-no-this-is-a-sign moments I ever hope to have as a baseball fan, and it still baffles me to this day. I eternally feel like I'm going to wake up from this and find myself back in that moment, whereupon Lincecum will immediately give up a grand slam.

The second one started much better, with Sandoval turning a quick inning into a run with an 0-2 swing of earthly delight. Maybe the Giants can actually score two runs against Verlander, you thought. Maybe.

The third one was the best of all: immediate gratification with a false ending before the pure glee. Gregor Blanco rapped a terrible pitch into center, and Posey singled shortly after. Pablo Sandoval doubled in that funny little Verlander-pitched All-Star Game spot he got back in 2012, and everything was joyous ... until Tim Flannery forgot that Buster Posey runs like an honorary Molina brother for about the 15th consecutive time this postseason. I'll defend Flannery from the barbs and criticisms, usually. He does a better job than most of the alternatives. But, brother, he needs to get some flashcards going about Posey being slow.

It would have been a bittersweet inning, which was borderline depressing when you thought about what could have been.

Wait around for the solid Español call. It's probably the best one.

New narrative: If Flannery holds Posey, Shields doesn't mess with the fastball and tries his dangedest to strike Pence out. He succeeds. Brandon Belt pops up to end the inning. The Royals score in the bottom of the first. Everything is lost. Everything is crumbling.

Instead, Pence saved everything. This is the eighth postseason series he's played in, and before tonight, his career OPS in the postseason was .569. Emmanuel Burriss's career OPS is .573.  The three-hit-single is great, and Pence has had moments here and there, but the Giants are in their second World Series with Hunter Pence in spite of what he's done after the 162nd game, not because of it. It's worked out to this point, but he's been early-career Barry Bonds with a smaller profile and better teammates.

A belligerent, scorching-hot World Series would be more than welcome, then. We're almost certainly dealing with sample-size goblins, here. We're still talking 130 plate appearances, before tonight. Still, if the Giants are going to continue trolling the world and win three more games, why not Hunter Pence? He's certainly talented enough.

We've seen what the good streaks look like. He's unstoppable in them. And that home run was vintage -- it was a flat, understated swing that didn't let you know how hard it was hit until you saw the back of Lorenzo Cain's jersey. Some homers are obviously gone before the camera cuts away to a different angle. When Pence is right, you don't even know what happened until the ball's about 40 rows deep in a bleacher wasteland.

I don't know. I love them all so much!

This is the portion of the recap that discusses Madison Bumgarner. It's odd, right? We're 800 words into this thing, and the pitcher who threw seven strong innings, allowing one run, has to wait for his tribute. Shameful, really.

Bumgarner allowed the first run of his World Series career. He's pitched in three games, winning them all. He's 25. He's a marvel. Seriously, send him some money. A few bucks. Let him know you're watching and that you care.

Let me just dig up the history of postseason starts that were worse, and, okay, looks like it's almost all of them. Yeah, have it right here. For the most part, they were almost all worse. If this is a sketchy Bumgarner start, it explains just how the Giants are here.

Bumgarner makes up for a lot, and sometimes it takes a less-than-optimal start to remind you just how good he really is. Think of the Giants starters in the Bonds Era. Different run-scoring environments, yes, but think of a three-hit, seven-inning game from a starter back then. One walk. Three strikeouts. That's mural-quality pitching, baby. That's something you talk about for years. That's something worthy of a game ball, even.

For the greedy Giants of 2014, though, it was a great start from a pitcher who can be transcendent. On another night, maybe the misses to location in the first three innings cost Bumgarner. In 2014, the Giants are up, 1-0, in the World Series.

I loved Bruce Bochy pinch-hitting Juan Perez for Travis Ishikawa in the fourth inning. I love, love, love it. The lead was set. Five runs. Even considering that Perez is on a short list of the worst hitters currently in the majors, the difference isn't that great between him and Ishikawa, especially with a lefty long reliever in the game. The defensive difference is substantial, though. And worth it.

It made me wonder what the strategy in the AL is with pinch-hitters. What in the heck do they even have benches for over there? Pinch-hitters are just supposed to hit when it's convenient, not when the easily identifiable situation dictates? Seems weird and easy to screw up. Bochy handled it quite well.

The American League is weird.

The first low-leverage situation of the World Series is in. Hunter Strickland got some work. Tim Lincecum did not.

Strickland made Lorenzo Cain look like he was swinging a two-foot-long human hair. He hit his location and made short work of the ninth inning. I still believe in him. He's not a ROOGY. If you're going to yell at the Giants when they bench Brandon Belt after 30 at-bats, you can't believe that Strickland is the worst reliever in baseball history against left-handed hitting. It's not logical. I'm glad he got the ninth. 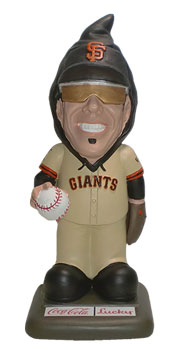 I still don't get Lincecum on the roster, but the dream is still alive. Game 4 or 5, Lincecum on the mound -- maybe in a 10-run situation, or maybe in a situation that MAKES US ALL-CAPS RAGE AT BOCHY, not unlike Cardinals fans with Michael Wacha -- and he gets the final out. It's a fantasy on a lot of levels, I know, and I'm not even thinking that far ahead. But if it happens, it's a PowerBall ticket that changes everything. It would be the best.

Stay vigilant, Mr. Lincecum. This weird team might call on you yet.