2014 NLDS: Why are the Giants starting Tim Hudson in Game 2?

Tim Hudson has been lousy lately, but the Giants are trusting him with a playoff start. Let's figure out why.

Share All sharing options for: 2014 NLDS: Why are the Giants starting Tim Hudson in Game 2?

Tim Hudson has thoughts about Stephen Strasburg's beans, if indirectly. He told the Washington Post about it.

"Obviously they have a talented group over there, there’s no question," Hudson told The Post’s Barry Svrluga. "They have some great pitching. But come playoff time, talent can take you a long ways, but what do you have between your legs? That’s going to take you real far. And I think we’ve got a group in here that really has some of that."

One time, before the days of the TSA, I hid an eighth of weed between my legs to get on an airplane. It might be the dumbest thing I've ever done. But maybe Hudson's talking about something like that. Like, maybe that's just where the Giants keep their scouting reports. They're probably really good scouting reports.

Of course, Hudson was probably talking about testicles and dangly dingles. The Giants have fortitude, see? Gumption. You know what it takes to win a World Series?

It takes brass balls to win a World Series. Also, more runs than the other team. Also also, Hudson spends most of his time slapping the coffee cups out of the hands of everyone who isn't Santiago Casilla.

I don't care so much about the genitals of the Nationals, though. I'll be honest. I'll be the one who takes a bold stand on that point. I care more about the hip of Tim Hudson. And Hudson was named the Game 2 starter, which absolutely blew me away. He was my fifth choice to start a playoff game, so let's figure out if the Giants are crazy.

What's up with Tim Hudson?

He's 39 and has hip problems. He dealt with them last year, and they're back this year, which is partly why his ERA jumped from 1.81 on June 12 to 3.57 by the end of the season. In his last 10 starts, he threw more than six innings just once, and that was against the Rockies at AT&T, which hardly counts. He had a 5.94 ERA in those starts, and the Giants lost the last five games Hudson started.

Look at the difference between a dominant June start against the Cardinals and his last start against the Dodgers. In June, he threw about a mile per hour harder with everything. He kept the ball down more, and he wasn't as vulnerable on hanging sinkers or breaking balls. Against the Dodgers, he got a lot of credit for gritting out a three-run outing against Clayton Kershaw, but he didn't look effective, even when he was getting outs.

Disclaimer: My using the following charts from Brooks Baseball is like a monkey holding up a trigonometry book to make a point, but it sure looks like something worth noting. Here are his release points in that game against the Cardinals: 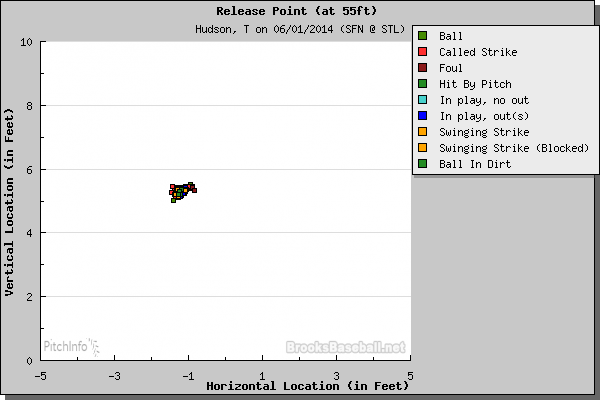 And here they are against the Dodgers: 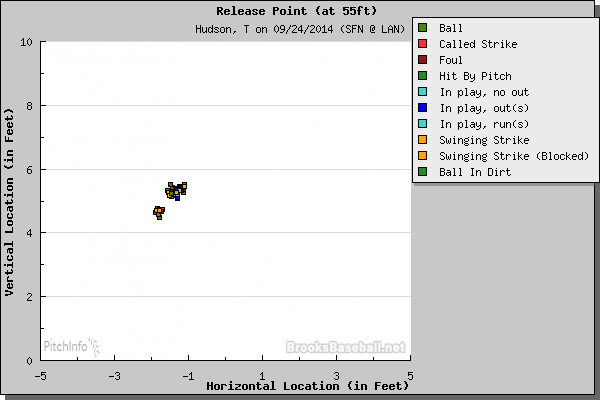 The first one is a model of mechanical consistency. The second one hints that Hudson is doing something differently. Maybe he wants to, I don't know. Considering the results, though, I doubt it.

Why would the Giants trust him?

It's not a park thing: Nationals Park depressed home runs quite a bit this year, so it's not like there's a dire need for a sinkerballer. The Nationals strike out more than the league average, so there might be something to the idea of putting a pitcher who can miss bats, like Yusmeiro Petit, in the postseason rotation instead.

But the Giants are the ones watching Hudson throw side sessions right now. They're the ones who have a better idea of how his hip's feeling and how consistent his mechanics are. I hate to appeal to authority all the time, but it's not farfetched that the Giants have tangible evidence to suggest Hudson is more like the pitcher from the first half than the second.

I don't trust him, though. Brass balls or not. I'm a little nervous about ... well, everything. But Game 2, specifically.

How has he pitched against the Nationals recently?

Let's see ... good gravy. He's been incredible against them. Since the start of 2013, he's started five games and his team has won all five of them.

That's a 0.80 ERA in his last five starts against them, including two this year.  The Giants won just two of their seven games against the Nationals this year; Hudson started both of them.

Now it makes sense. If the Giants are convinced that Hudson's fine -- and he's thrown 10⅔ innings since September 7th, so maybe that wonky hip is rested -- maybe there's something to the idea that he gives the current Nationals team problems. It's a small sample, just five games, but he's sure bugged that team.

Now I'm trusting him more. Still nervous. Still wondering if that's the right move. But if you're looking for a reason why he's starting on Saturday, that'll do.

If you're looking for a reason why stout peeners make baseball players better, well, you'll have to ask him.