Can the Giants win the pennant without a home run?

It's possible, but it's better if we didn't find out.

Share All sharing options for: Can the Giants win the pennant without a home run?

When teams didn't hit home runs during the regular season, they had a .370 winning percentage. That's the equivalent of a 60-102 team over the course of a full season. The Royals, vroom-vroom darlings of America, were 41-53 when they didn't homer, and that was by far the best record in the American League. The Cardinals had the best record in baseball when they didn't homer, 37-48.

The Giants were 27-48 when they didn't homer in the regular season. They're 5-2 in the postseason. 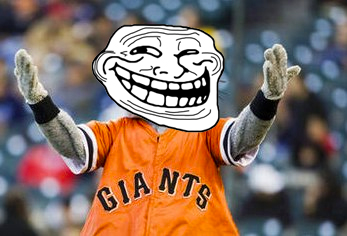 Yes, well, while I don't care at all how the Giants win, and it would be immeasurably funnier if they somehow won the pennant without hitting a home run, at some point, their dinger-free ways will hurt them. It'll hurt them baaaaad.

Now, the Giants wouldn't be the first team to win the pennant without hitting a home run. The 1990 A's, of all teams, swept the Red Sox in the ALCS without a homer. They had Mark McGwire, Jose Canseco, Rickey Henderson, and Dave Henderson all with 20 or more homers, and they finished with 164 homers as a team. But apparently they were the anti-Cardinals of that postseason, completely reversing course from what they did in the regular season, at least as far as dingers were concerned.

Every other team, though, had at least one homer. There was at least one bolt of dinger electricity in a game that put immediate runs on the board, runs that came without balks, wild pitches, or adamsing. Those things are so important. It's why the Giants were on a 105-win pace at one point, before they were awful before they were okay before they were a win away from the pennant. They were hitting so many home runs back then. Now they're not hitting them at all, which means it's probably time to freak out, right?

Probably not. I mean, I hope not. But a six-game homerless stretch doesn't have to mean anything. Over the last five seasons, the Giants have had 10 dingerless streaks as long as the Giants are in right now:

There was a long streak of homer-free ball this season. Seven games, right when things started to melt.

What happened next: dingers. Six in three days. The Giants didn't win any of those games -- June! -- but they were hitting for power again.

Later on in the season, just when things looked like they were stabilizing, the Giants went six games without a homer. Three of those games were against the Royals, which I'm just going to ignore, and the Giants were 1-5 in that stretch.

The point of this is to note that just because the Giants have completely forgotten how to hit for power in the postseason doesn't mean that they're a team without power now. These stretches pop up for a week, and then they're quickly forgotten when the dingers start flying. The dinger-free baseball doesn't have to continue. It likely won't continue, at least if the Giants get to play long enough.

Hit some dingers, Giants. Hit them early, hit them often. There are ways to win without them, but that's a chance not worth taking. If the Giants are going back to the World Series, I'll guess it's going to take at least one home run to get them there.

In conclusion, dingers are good when the Giants hit them. This is what I believe, and I hope this essay has convinced you as well, thank you.