Dingers are better than no dingers, depending on the perspective.

In the top of the ninth inning, the Giants put on a fantastic, gutty display of comeback grittery. Andrew Susac singled up the middle. Juan Perez chopped one up the middle. Matt Duffy came in to pinch-run for Susac, kept himself on the bases with a great read on a line-drive out, and scored from second on a wild pitch to tie the game. The Giants worked two walks to load the bases for their cleanup hitter.

Throughout the game, the Giants had consistently strong at-bats. They rapped 10 hits and worked four walks. They even got two hits with runners in scoring position, one with two outs.

I'm as eager as the rest of you to play Professor Hindsight with a lot of the quirky decisions that Bruce Bochy made in the game. But unless he was specifically telling Tim Flannery not to flash the dinger sign when the Giants were up, and commanding Buster Posey to give dinger signs when the Giants were pitching, I'm going to blame this on the pitching before I do anything up. 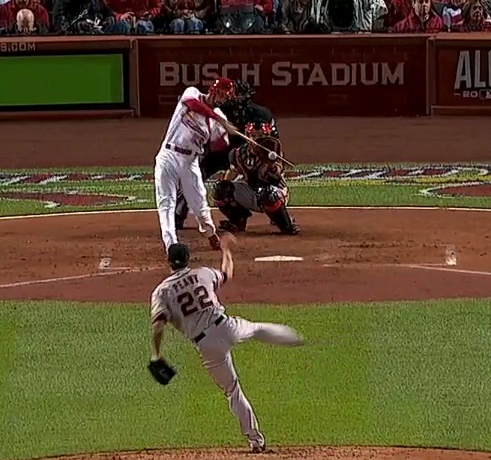 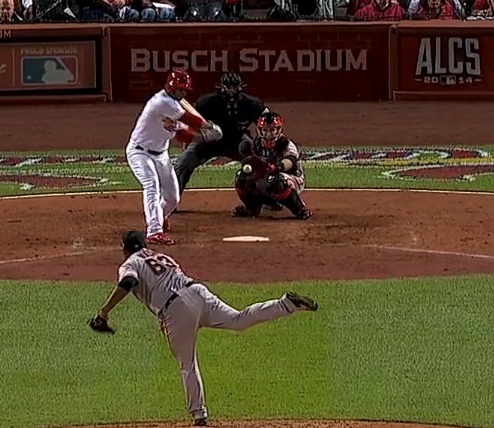 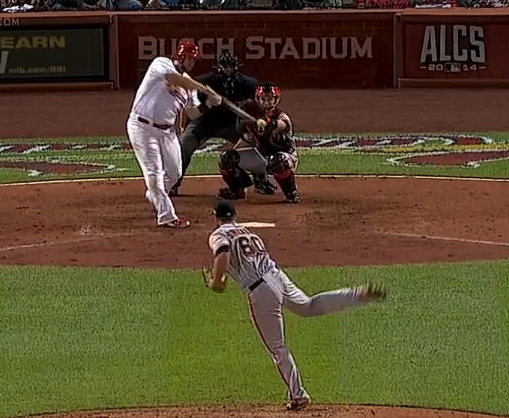 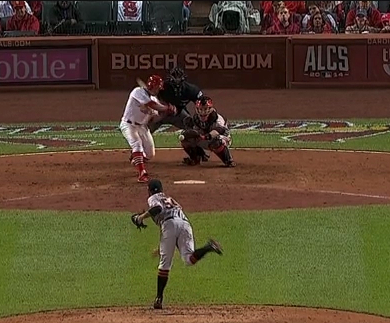 I don't even know what that was, but it wasn't good.

Teams that allow four or more home runs are 5-51 in the postseason. That the Giants came close to winning is something of a miracle. That they came close to winning without a dinger of their own is something of a miracle. The Giants have gone homerless over their last four games, and they've hit just two in the seven games they've played this postseason. They essentially have home-field advantage for the rest of the NLCS. For them to get that far with the '85-Cardinals-without-any-speed approach is mesmerizing.

The Cardinals literally hit fewer home runs than the Padres this year. Literally. The Padres. No joke. So it's not like you can even take away some grand unified theorem of postseason baseball from this game. It's not like this was a roster-construction thing. The Giants have hitters who can hit home runs, and they did it more frequently than the Cardinals this year.

On Sunday, the Cardinals hit the dinger button repeatedly. The Giants did not.

Now we can complain about other things.

Before you complain, note that this is the first one-run loss the Giants have had in the postseason since the Rick Ankiel game. They had been 10-0 since then, and 11-1 overall since the 2010 postseason started. If you complain too much, beetles will crawl out of your heating ducts and nibble on your lips until you wake up a bloody mess.

I mean, we're still going to complain. Just as long as you know the risks.

On the other hand, I don't want to see him against a left-hander with power again for the next six months.

The other option for that inning was Sergio Romo against Matt Adams. Maybe Tim Lincecum. So ...

Dang, how I wish this were a paean to Matt Duffy's baserunning. That would have been a legend to tell the grandkids about, just like the Ishikawa walk or Posey's stolen base. Ah, remember when Matt Duffy won a game with his legs? Well, it went like this ...

At least it annoyed Cardinals fans for a few minutes.

The gauntlet's been thrown. Cardinals fans demand a curtain call after third-inning home runs. The arms race is on. Giants fans, get together and work your magic. Demand two curtain calls.

You read me right. Two curtain calls. When a Giants player hits a ... whatever the park-adjusted equivalent of a home run is ... cheer until that player steps out of the dugout and doffs his cap. Then keep it up. Hitters, you have to be on board with this and ask for time. Fans, keep cheering until there's another curtain call. As. Long. As. It. Takes.

We're sitting here like a bunch of mooks, hand in our underwear, prepared to give just one curtain call? The hell is wrong with you?

Possible scenarios in which the double curtain call is appropriate:

I know what you're thinking. If the series gets back to St. Louis, they'll be ready for three curtain calls. Except the way to defend against that is to never stop the last curtain call. We'll work in shifts. Stanley, you have Friday. Megan, you're on for Saturday. Just keep clapping, hoping that the Giants player who did the thing comes out of the dugout. It's like the Great Pumpkin, but for baseball. Just keep doing it, be earnest about it, and maybe he'll appear.

Goodness, my fandom is just ... I mean it's absolutely engorged. Clapping for welcome-not-unusual feats of strength is just so enriching. Try it. Seriously, try it.

Double curtain calls. Don't fail me on this.

By all rights, Peavy should have had a couple more of those games after coming over to the Giants. It's not like it would have made a difference to the playoff race -- dammit, I'm eating here, Brewers -- but maybe it would have tempered the idea that Peavy is unrestrained wizardry.

Again, the Cardinals hit four homers, and Bochy did take a chance by a) pinch-hitting his backup catcher and b) pinch-running for said catcher to empty his bench entirely. He wasn't managing for the 14th inning like Dusty Baker or Felipe Alou would have. I like that.

The Javier Lopez thing was just weird, though. He hasn't been sharp all postseason (or September), but you have to trust him to get Taveras, Carpenter, and Jon Jay. (Also, note that Taveras did noticeably worse against left-handed pitching in the minors.)

That's been the plan the entire time, right? Don't know why it always stings so much when the permutation isn't exactly the way you were hoping ...