Even though Bumgarner was held hitless, the Giants found a way to win.

Share All sharing options for: Madison Bumgarner dominates, Giants up 1-0 in NLCS

When the history of this weird team is etched into the wall of a space shuttle and shot into space for other civilizations to find, note that the trolling started much, much earlier than we tend to remember The trolling started when the Giants used three first-round picks on young pitchers within a six-year stretch, and they all worked out. There's no sense listing the organizations that haven't been so lucky throughout their entire draft history -- there are too many of them. The Giants had a six-year stretch of draft magic, and they built a rotation of dreamstuff.

(In the seventh year they drafted Buster Posey.)

Madison Bumgarner gets the attention tonight, of course. In the big picture, the Giants hitting on so many first-rounders is part luck, part skill, and a plurality of trolling. In the small picture, look at Madison Bumgarner pitch. Of course the other team was feckless. Look at the helpless batters, unsure if they're getting a fastball or a slutter until it's too late. Look at Bumgarner getting hitters off balance if he's not blowing them away. The Giants aren't always licking the even-year toad and making cute faces as they win. Sometimes they're just better.

Bumgarner was better than Adam Wainwright tonight. That's the plot of the movie, the thematic spine, and everything else is just a way to get the MacGuffin from one place to another. Bumgarner was the best pitcher to pitch in a professional baseball game in the world today. The Cardinals couldn't do anything, and the Giants are three wins away from the World Series. There are still dozens and dozens of inning left in this series, and innings can be the worst, but if you're tallying up scenarios that sure seem like a good omen, this start to the series will do.

Back to the bit about the rotation, though. For the NLCS preview at the mothership, I wrote about how freaky the progression has been:

Consider the last three Giants teams to make the NLCS. The first one had TIM LINCECUM, MATT CAIN, and MADISON BUMGARNER. All three were at the height of their powers, or close to it. The next version had MATT CAIN AND MADISON BUMGARNER, with Tim Lincecum unceremoniously demoted to '70s super-reliever. The 2014 version has MADISON BUMGARNER. The 2016 version is going to be Kurt Ainsworth in Game 1 and a uniform stuffed with six chickens standing on top of each other in Game 2.

It's like Tim Lincecum was carrying a torch through snake-infested catacombs, and when the poison dart got him, he gurgled something like, "AAACKKCKK, TAKE THIS" and then Cain was leading the way. When the poison dart got him, he gave the torch to Bumgarner. Maybe he'll reach the golden idol on his own, or maybe it'll be up to the six chickens. But it's his pitching staff now. We marveled at the preternatural talent and poise of the kid in 2010. We tugged our collars when it looked like he was evaporating right as the postseason started in 2012. This year, though, he's simply Madison Bumgarner, one of the greatest pitchers alive, and somehow getting better.

He's so damned good. And he wants to bite Yasiel Puig's nose off. He's got, like, eight or nine tools. He's perfect.

It was hard to watch Wainwright. He still might have a start left in the series, so don't get too giddy. His demise might be greatly exaggerated, for sure. You know what he's like at his best, though. There's just enough fastball to make batters jump at the curveball, and there's more than enough command to make everything even more devastating. If that guy showed up, the game would still be going on, and we'd probably be in Yusmeiroland right about now.

Instead, he was off, so very off. He missed with location. His stuff wasn't crisp. He abandoned his fastball completely. And yet, he almost threw a quality start. He's still kind of a badass, even when he isn't very good.

You know what it's like to watch a pitcher go through that, where nothing goes his way and it seems like he's going to throw 100 pitches in the first inning alone. It makes my skin itch from the inside just thinking about it. Still, it doesn't mean anything if the other team is swinging at everything, vomiting into their cleats because they don't know what else to do. The Giants had consistently great at-bats.

It started with the first at-bat of the game. Gregor Blanco worked seven pitches out of Wainwright, and he got a snoozy sinker right in the middle of the plate. He didn't get a hit, but the process was sound. Even though the Giants couldn't get more than three runs -- Brandon Crawford left nine runners on, just by himself, which didn't help -- their approach was delightful. It's like they're dumb college kids who don't bother studying until 4:00 a.m. the morning of the final. "Dude, Skoonch, hand me that No-Doz and put on the Huey Lewis. We gotta take this seriously or Phamma House is gonna get bounced from U Tech!"

Have you thought about maybe not waiting until the last ... whatever, just keep doing what you're doing.

The Cardinals helped, of course, playing like total bonermitts at times. Kolten Wong muffed an easy double play that gave the Giants a run they didn't deserve. Matt Carpenter booted a hard Blanco liner (after another good at-bat), and at that point I yelled at my TV on Wainwright's behalf. I felt bad for the dude.

Carpenter: Sorry about that, man. I'll get it next time.

Carpenter: You gonna get that?

Wainwright: It's not a phone, you jackass.

From the Randal Grichuk catch-not-catch to the balk-not-balk from Bumgarner in the seventh, everything's coming up Kinsler at the wall or Blanco down the line. That could all evaporate tomorrow and not return for 100 years, but for now it's fun.

Danged fun, if I can let my hair down. It's danged fun while it lasts.

Bumgarner did balk, and I feel bad that it wasn't called, so from now on, I'm pretending that the Giants won 3-1.

Upon further review, no I'm not. Mostly out of greed. 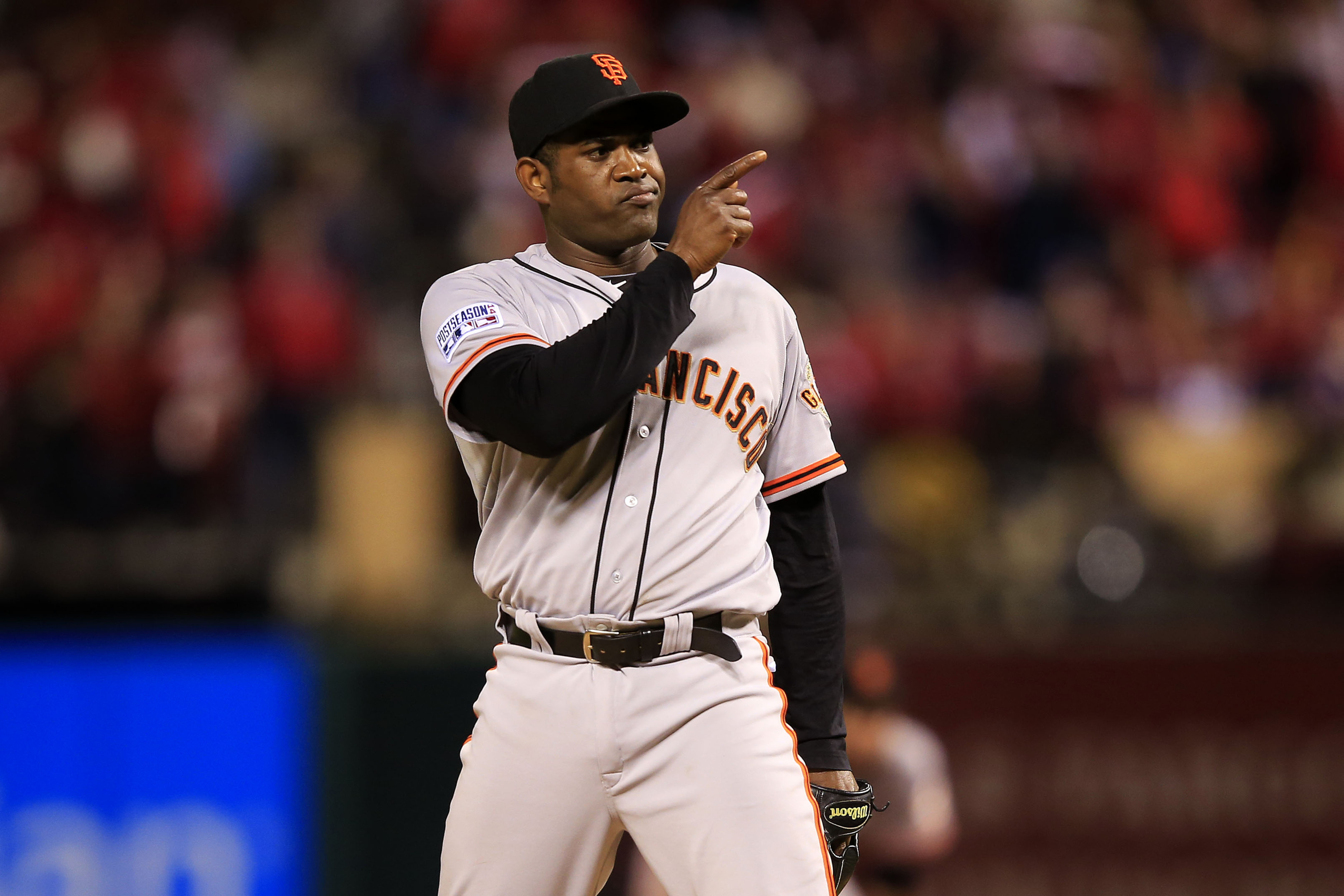 Ever since the postseason started, Pablo has been Flowers for Algernon'd, working walks and making the pitchers come in to him. I don't get it, either, but he's been a different hitter. So it's good to see that he still has the latent talent of nonsense hitting in there if he needs it. He hit that ball in the air. In the air. And hard, too.