If you write about baseball, you either have to admit you're wrong constantly, or you have to pretend you're absolutely smarter than everyone else. There's no in-between. When you offer opinions about something as variable as the performance of baseball players, you're going to be wrong. Spectacularly wrong. Most of the time, even. So either preface every prediction with "I am stupid. This is wrong", or double down and pretend your predictions were whispered into your ear by spirit children.

I err on the self-effacing side. Too much, I think. It screws up the strength of my arguments, usually. But it's usually better than being a complete jackass.

The reason for this navel-gazing: I found my stupidest projection of 2013. And I'm not proud of it. So I'm making a point to note that while I feign cluelessness often, this is a special case. This is especially stupid, even by baseball-writer-trying-to-predict-things standards. Behold:

Prrrroooo. Turns out, Zito possibly pitched his way out of baseball. He was bad. Remember the warm fuzzies from the NLCS and World Series? Gone, in a puff of metaphor vapor, along with the rest of the warm fuzzies surrounding the team.

The community projection for Zito was just so adorable. There's a graph in the post that purports to mean something. It should have been an MS Paint rendering of Zito's career slowly being digested over 1,000 years. 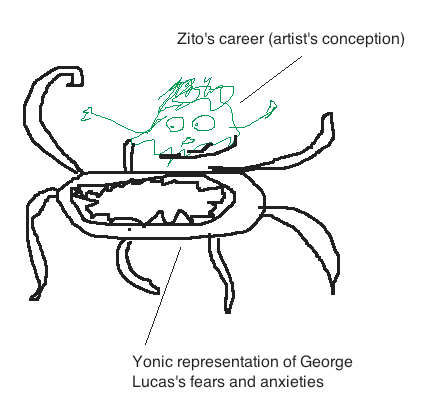 What were the reasons for my Zito-related optimism?

The reasons that I should have been more pessimistic:

His 2013 wasn't exactly a best-case scenario, even before the playoffs, but it was close to it. A real best-case scenario would have to do with his strikeouts coming back, and why would they? Because we'd dream hard enough, dammit. Other than that, there was no reason to think the strikeouts would come back. Which meant we were likely to see the Zito we saw.

The Giants did not pick up his option at the end of the year.

I apologize for any harm my Zito-related optimism might have caused.

That's about all I have to say about Barry Zito, and I was a little intimidated when his name came up for the community-projection reviews. There's nothing left to say. A moratorium on Zito-related articles is overdue. We'll always have 2012, but, well, you know.

Luckily I found a Zito-related thing in the archives recently that will allow me to fortify this weak post, from the Chronicle in 2003:

"As a kisser and a pitcher, I try to mix it up, depending on the opposition, " he answered. "I assess each situation because it's always different. Sometimes I use my off-speed stuff and mix it in with the hard stuff, and every so often I throw in my slow curveball. . . . I always try to keep them guessing!"

Your first job is to picture him actually saying the last sentence in a way that required an exclamation point.

Your second job is to figure out what a change-up kiss is like. Probably where you go in like you're going to swallow your partner's lips, but only end up puffing a breath of air into their nostrils.

Your third job is to regret the Giants not having Barry Zito when he was a little younger and sillier. Also, when he was much, much better.

I kind of miss the guy. Baseball's weird like that.