Barry Bonds isn't in the Hall of Fame, and that's still ridiculous

Share All sharing options for: Barry Bonds isn't in the Hall of Fame, and that's still ridiculous

You might not care about the Hall of Fame. I'm seeing that sentiment a lot these days, from the comments here to my friend Marc Normandin, there are more and more people who make that wanking pantomime when the BBWAA and the HOF come up.

If you're one of those people, I'm sorry. Here's a GIF of Matt Williams obliterating a baseball in 1994:

But I care. Quite a bit, actually. People are fond of asking, "Who cares?" about the Hall. Once you've accepted that you care about sports, which are usually less important than the average city council meeting, I don't get why caring about the Hall of Fame seems odd.

If you want words about the Hall of Fame and Barry Bonds, I've written them. There's not much more to rehash. The outrage came long, long after the suspicion. It came way after MLB and Bud Selig cared. It was implicitly okay to take whatever you wanted. There's a great column at Grantland about the media's reporting of the Steroid Era. When you took steroids, here's how you were presented in the media: 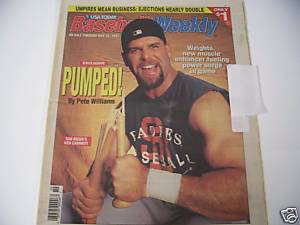 That's the argument against the zero-sum moralizing: it lacks context.

But it doesn't mean steroids were always okay. There were always victims, especially the people who couldn't crack a 25-man roster because they didn't want to take the risks. If someone wants to invoke the character clause based on the workplace ethics of steroids, okay. Maybe players should have thought of those ethics.

More than the above, though, I just want the museum to reflect baseball, warts and all. I want Pete Rose in the Hall with a plaque that talks about him betting on his own team, even if I don't want him within 100 feet of a front office or dugout. He's a part of the story.

Bonds is a chapter of the story. He's in the trailer for the movie. He's a pivotal plot point. The Hall of Fame shouldn't be a cookie given to the best players who happen to be the best people, a reward for good deeds. That makes for a stupid museum.

The news isn't good for Bonds. His support dipped in his second year. Historically, that's been a great indicator of who doesn't get voted in. The groundhog saw its shadow today, which means 13 more years of bloviating.

Eventually, though, we'll get to hear the speech. Bonds will be an old man, and he'll probably have more screw-it in his persona than he does now, even. I can't wait. The Expansion Era committee will eventually reflect the times, I'll guess/hope, and Bonds will get in.

Until then, the Bondsophiles who care about this stupid stuff will continue to be irritable in the first two weeks of January. Barry Bonds was the best I ever saw, both before and after the chemistry of broken dreams. Seems like that should be the most important thing to consider.