Giants news: No plans for a sixth starter, Tim Lincecum sat on his glasses

Share All sharing options for: Giants news: No plans for a sixth starter, Tim Lincecum sat on his glasses

The day before FanFest is reserved for media-types to ask the players and personnel a bunch of questions. The media-types pass these nuggets along through Twitter and various recaps. My job is to wear sweatpants and filter the information for your perusal.

The rotation is set

You figured as much, but if you thought there was a slight chance the Giants would surprise the world with a Bronson Arroyo signing, it ain't gonna happen.

The Giants aren't so keen on ruffling feathers, so I can't imagine a situation in which they would move Ryan Vogelsong to the bullpen, who I'm assuming was promised a rotation lot. You might scoff, but that sort of duplicity is noticed. Players talk. I wouldn't do it for a one-win upgrade that costs tens of millions, for example. If you're going to sit a guy, it's because the Rays are so eager to get Jeremy Affeldt, they'll trade David Price for him.

But more than the idea that Vogelsong (or Tim Lincecum) was promised anything, the Giants are at the top of their budget. From the Baggs piece linked above:

Once you have five starters, unless you’re flush with cash or there’s an opening, very few teams sign six starters with experience."

When I think of the Giants, I don't necessarily think "flush with cash." Sometimes I think "overflowing" or "glutted" instead. So maybe the Giants are merely glutted with cash, and that's why they can't go after another starter, because they need to be flush.

To be fair, I don't think Vogelsong is the problem. He's paid like a fifth starter, and he's a decent bet to produce as a fifth starter. The Lincecum deal is the one that looks crazier in retrospect. As someone who contorted in different ways to convince myself the deal was okay, it's not like I can grumble too much. I was just terrified of him in another uniform. I'm probably way too sentimental to work in a front office.

He's working on strengthening his back -- I'm picturing the montage in Rocky IV, but with more Wii -- and the mallet finger isn't a concern. The Giants have okay depth at second, but no one with a chance to be average with the bat apart from Scutaro. They kind of need him desperately.

Brandon Belt has a beard

Buster Posey is in the beefcake of his life

Posey told Alex Pavlovic he added 10 pounds of muscle in the offseason, citing an October without commitments. It's easy to point to the second half last year and blame it on Posey getting tired. But how did he have one of the best second halves in the history of the world in 2012, a season after not being able to walk without crutches?

That's not a rhetorical question to cast doubt on the claim Posey was tired. It's a legitimate question that's bugged me since 2012. How in the world did he stay so good? If I squatted for 15 minutes, I'd have to stay in bed the next day. In September, after all the nonsense of 2011, Posey should have hit .001/.001/.001 because he was so tired.

Tim Lincecum sat on his glasses

I hate when that happens. But I'll assume it happened when he was cheering on the Seahawks, and that makes me feel better.

The R2D2 beanie does have a Giants logo 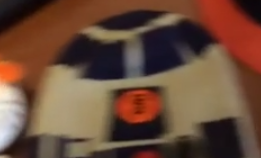 This is almost as important as the new u ... check that, it's way more important. Look at that li'l guy!

No snark: That's a great thing. A nice, heavy two-seamer would be a great way to combat reduced velocity. If the slider/curve/splange stay effective, transitioning away from the four-seamer wouldn't be the worst idea.

Of course, if he's picking pieces of Hudson to ape, I'd prefer the command, personally.

Here is Matt Cain throwing a baseball at AT&T Park

Hot damn, do I miss baseball