Apologies for missing this, but who releases news this big on a Friday afternoon? The Giants are giving away a Duane Kuiper bobblehead, and unless it had a sound chip that played "Dodger Boogie", I was going to want one. Nay, I was going to do awful things to get one/acquire the money to get one.

But I figured it was going to be a standard pose. Kuip behind a desk. Kuip holding a mic. Something like that.

It's Indians Kuiper. Didn't see that coming. What a bold, courageous move from the promotions department. Well, as bold and courageous as bobblehead-related things get, anyway. To give away a bobblehead of someone wearing another team's uniform -- the team they're playing that night, mind you -- is unprecedented. That's a confident organization.

Confident this moment deserved it, that is.

That is an outstanding moment. Not just for the Giants, but for baseball. America. The Giants could have gone with something in a Giants uniform, and I personally would have loved a re-creation of this card ... 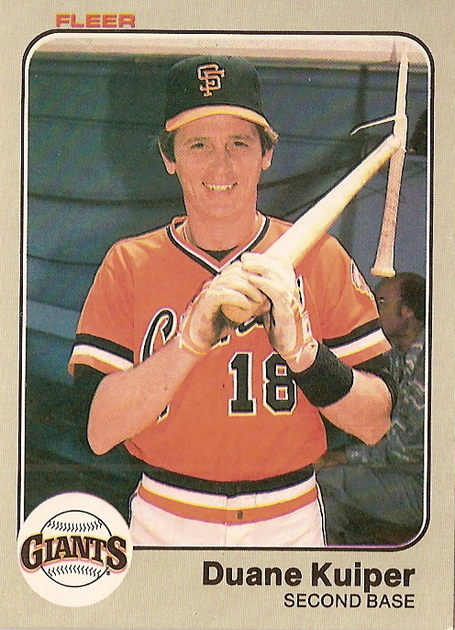 ... but I'll trade the Giants uniform for something more important. This is almost certainly the year's best promotion, and that goes for all 30 teams. Heck, it goes for all the independent teams, too. Even if there's a team in Scoons, Wyoming that has a Thomas Pynchon Night, where they wait an extra hour before the game to start because they're waiting for Pynchon to show up and throw the first pitch, the Kuiper bobblehead is the best promotion of the year.

This is probably the last bobblehead-related post you'll get from me for a while, my apologies. But this one was important. Look at how regal that little guy is! A third of my estate shall go to it.