Share All sharing options for: Random Box Score From the Past: July 23, 1963

It's been a long time since our last Random Box Score From the Past, and every day I get e-mails asking, "Hey, when are you going to do another RBSFP?" and/or "Want to improve your LOVEMAKING???" So it seems like the right time to bring this wildly popular series back.

The Box Score series, not the lovemaking series. The last post on bedroom tips was a flop. But I still don't think it hurts to whisper Sergio Romo's strikeout-to-walk ratio while nibbling an ear or two.

The premise is simple: Pick a year, then randomly pick a game. In a best-case scenario, we all learn something about the Giants from that year. In a worst-case scenario, you still get to look at a baseball card with a hilariously coiffed baseball player.

It was the year after the Giants won the pennant. The year after Bobby Richardson was in the right place at the right time. And you know there were some Giants fans thinking, "Eh, they have Mays, McCovey, and Marichal. They'll win one soon." Oh, how little they knew. The Giants needed Cody Ross and Jonathan Sanchez, not Mays and Marichal. And a system that cut the second- and third-best teams in each league a little slack.

From 1955 to 1970, the Giants won over 90 games six times, and they averaged a .538 winning percentage, which was the equivalent of an 87-win team. They played in one postseason.

The Mets were famously terrible. I'm not sure if there's a more famous terrible team in the history of baseball. The Cleveland Spiders are the only team that compares, really. Maybe the 2008 Giants. But the crown of leeches probably goes to the Mets of the early '60s. So bad.

They were managed by Casey Stengel, who was like the Mike Aldrete for the Giants of the early '20s, and who was a very, very, very famous manager. And also very old. He couldn't have had time for that crap. If you added the winning percentages together from his first two seasons as a Mets manager (.250 + .315), you get .565, which would have been his second-lowest winning percentage in his 12 years as a Yankees manager.

Pitching was Roger Craig, who was like the Roger Craig of the Giants in the late '80s. It always tickled me growing up that there were two famous Roger Craigs in San Francisco sports at the same time. Craig took the loss in this game, dropping him to 2-17. He would lose 22 that season, even though his ERA+ was almost average for a starter (92).

The Giants scored three in the first and four in the second. Willie Mays hit two home runs, as he was wont to do, and Juan Marichal pitched a complete game, allowing just one unearned run.

The big draw for the Mets in those days was Duke Snider, who was 36, and still productive when he played, which was rarely. After turning 31, he never accrued more than 370 at-bats in a season, playing fewer than 100 games in each of his last two seasons with the Dodgers. But enough about that goofball. Let's talk about one of the more underrated names in baseball history. I linked to the Cleveland Spiders up there, and they had one player named Crazy Schmit and another named Harry Colliflower. You could do an Abbot & Costello routine with those guys that wouldn't make sense, but it would sure be awesome.

But the Mets had Dick Smith. It's so innocent, that name, so common. Smith is the #1 surname in America, and Dick is short for Richard, and surely we all know at least one person who goes by Dick today. How many of us, though, know someone whose trade and vocation is literally smithing dicks? Few of us, I'm sure. It took eight grueling years of apprenticeship to become a full-fledged dicksmith, so it was an unusual trade. It was hard work. Really, really hard work. My great-great grandfather was a dicksmith, and he once wrote in a letter that …

Get back to the box score, you immature idiot. This is a family site. A family site!

Right, sorry. The point is this: Dick Smith.

The Giants of the '60s make me so danged sad. They were so good, so stacked. If you made a list of underrated dynasties, the Giants from the '60s would be on it, mostly because they never won anything, apart from one pennant. Which is to say, there weren't a lot of obvious holes on the '63 Giants. They had Willie McCovey in left field because they had Orlando Cepeda at first. Five of the starters had an OPS+ over 127, and that doesn't include Harvey Kuenn and Tom Haller, who were both pretty danged good.

But there's always someone to complain about, right? We're good at complaining.

And it would have been fun complaining about him. 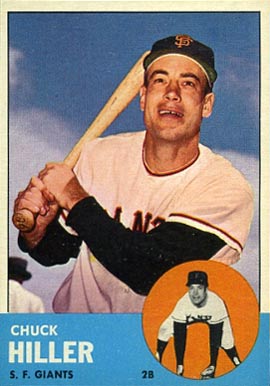 Little-known fact: Chuck Hiller was the happiest baseball player who ever lived. His nicknames were "Smilin' Chuck", "Ol' Grinmouth", and "Hillerious."

Well, they should have been.