Share All sharing options for: The greatest four-game series in Giants history*

One of the greatest 21st-century series the Giants ever played happened in 2001, when they were a team powered mainly by Barry Bonds' pursuit of the single-season home run record and the scraptastic Rich Aurilia thriving in the #2 spot of the lineup. Remember, #2 hitters are supposed to see more fastballs. This was the conventional wisdom at the time. Mainly, though, the Giants had inexplicably traded Bill Mueller in the offseason for Tim Worrell and had no better option for their 2-hole.

Anyway, the Giants came into the 2001 season not necessarily favorites to win the division again, but Arizona's half-season success was a bit of a surprise. Many had picked the Giants, Dodgers, or Rockies to take the NL West. A sluggish performance over the first half (46-42 at the All-Star Break) and a strong second contender for the division, the Dodgers of Los Angeles, had the Giants in third place, fighting to stay in the race, knowing that a series loss would likely knock them out of the running for a playoff spot as they rolled into "The Copper State".

This series occurred 12 years ago, meaning that I am hella old and we are all quickly spinning towards the abyss and what is time and oh god I used to be so young.

Sadly, I could not locate any video of this series for reference, so a lot of the following is culled from my own memory bank as well as whatever a web search could provide. I was an athletics-camp counselor at the time and remember watching at least one of these games at a bar in Lafayette, California.

The National League standings the morning of July 26, 2001, before game 1: 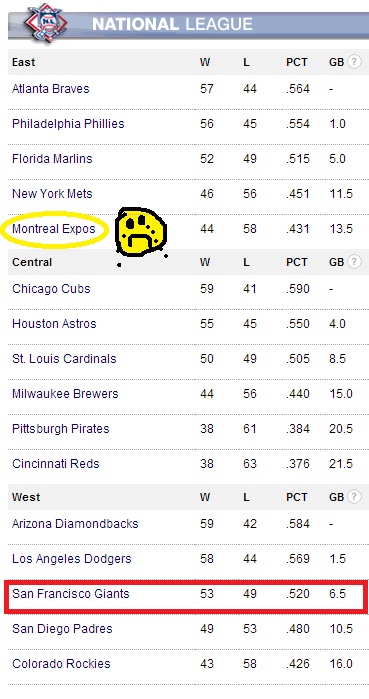 Five games out of the wild card, too, with three teams to hurdle. The Giants had lost 4 of 5 and were scheduled to face both Schilling (game 1) AND Johnson (game 4), with the Diamondbacks' versions of 2010 Todd Wellemeyer and 2013 Barry Zito filling the baby's diaper in between. A split was the best-case scenario.

THE STORY: The Giants smacked the crud out of Curtis Montague Schilling. Recall that in addition to hating Barry Bonds and being bad at business, Mr. Schilling had a penchant for surrendering home runs. This was Schilling's worst start of the 2001 season by Bill James' Game Score (29).

"Bonds' 43rd and 44th home runs of the season, the 537th and 538th of his career, broke a tie with Mickey Mantle for ninth place on the all-time list and more significantly propelled the Giants to an 11-3 victory against the first-place Diamondbacks.

The rout in the opener of a four-game series was as crucial as it was stunning, for the Giants let Arizona know they intend to be players in the National League West race. They now trail by 5 1/2 games." [Link]

"Most of the time I get walked with the bases loaded. That's just an old Arizona saying." - Barry Bonds

2001 BRYAN SAYS: "Oh crap. There's no way they're gonna beat Schilling. He's too good and the Giants aren't very good this year. He's going to domina-WHOOOAA they're hitting him hard! Bonds! BOOOOOONDS! BOOOOOOOOOOOOOOOOOOOOOOONDS! No, no. I can't drink. I'm only 20. Everyone's D-D."

WHOA. I TOTALLY FORGOT THAT: "Baker says he and Williams patched up their differences in a telephone conversation Tuesday. The close friends had to be restrained from going at each other in a bench-clearing confrontation after Chad Zerbe threw a pitch behind Williams last Sunday."

"Hello, Curt? You're A Stupid-Head"

THE STORY: Barry Bonds hits career home run #539 and Kirk Rueter bounces back from his disastrous previous start (July 22 also against AZ, but at Pacific Bell Park), wherein he allowed 10 hits in 4 innings. He allows 11 hits in 6 innings this time out. In that bad start, Rueter also faced off against Brian Anderson, but lost. In that game, Anderson pitched 8 innings and allowed 3 home runs as well. Baseball is weird.

SFGATE SAID: "In the three-game Galarraga era, the once moribund offense has hit 12 homers and scored 29 runs, totaling 20 runs here as they've secured at least a split of this important four-game series." [Link]

"Ain't nobody going to protect Barry but Barry," Bonds said. "There ain't no other Barry. He'll help Jeff." - Barry Bonds

2001 BRYAN SAYS: "Of course, the Giants are going to be great against Schilling and then get dominated by Brian Anderson. Just watch. He just pitched eight innings against them last week. They always make awful slop-throwers look like Cy Young. Just watch. Bonds! BOOOOOONDS! BOOOOOOOOOOOOOOOOOOOOOOONDS! Hey, thanks for inviting me to this room party. I shouldn't drink, though. I don't want my head clouded by alcohol in case there's an emergency at 11pm tonight with one of the campers. Yeah, even one drink could impair me."

WHOA. I TOTALLY FORGOT THAT: Brian Boehringer existed. AND that the Giants had traded for Wayne Gomes in addition to Andres Galarraga at the deadline.

THE STORY: Marvin Benard and Rich Aurilia combine for a line of 8-12, 2 HR, 6 RBI, 5 runs scored and the Giants show the Diamondbacks why starting Albie Lopez was always a bad idea. Also, a week after hitting a pinch-hit grand slam off of new acquisition Brian Boehringer, David Dellucci went 2-4 with 4 RBI against Russ Ortiz as a starter.

SFGATE SAID: "With Rich Aurilia homering twice more in an 11-4 victory last night, their fourth blowout in a row, the Giants have achieved the unthinkable and won the first three games of their series against Arizona by a combined score of 31-12. They also clinched their first winning trip of the season after opening with two lethargic losses in Colorado... Where has all this hitting come from? It's a puzzle. The Giants' offense has been mired in the muck all year." [Link]

"Since Galarraga got here, it seems like it's been contagious. Everybody is swinging the bats, and we're doing what I call a Giant thing, which is get hot at one point and then keep rolling the rest of the year." - Armando Rios

2001 BRYAN SAYS: "They've gotta win this game. The split isn't good enough. It's Albie Lopez! They've gotta beat him because there's no way -- NOOOOO WAY -- they're beating Randy Johnson tomorrow. None chance. Ugh. Now Marvin Benard's going to keep playing. I love you, Russ Ortiz. You're so awesome. OK, fine. One drink isn't going to hurt. That was good. I think I'll have another. Yes, the Giants won! Now let's go check on the campers and see if anyone's breaking curfew. Oh ho-ho! Busted! Wall sits, kids! You don't know what a wall sit is? Well-hell-hell, let me show you! You know, when I was your age, I went to basketball camp and I got busted for talking to my roommate when we were supposed to be asleep, and the counselors made us do wall sits for TEN MINUTES. I think my toes were bleeding by the end of it. I'm only going to make you do them for FIVE minutes."

WHOA. I TOTALLY FORGOT THAT:

"A source close to the Pirates said the Giants have engaged Pittsburgh in talks for starting pitcher Jason Schmidt, but the Pirates believe that the Giants' first choice is San Diego left-hander Sterling Hitchcock, who shares a Yankees tie with Giants general manager Brian Sabean.

It's unclear what the Padres want in return for Hitchcock, but they have long admired Rios. Sabean has stated, however, he is not inclined to trade anyone off the 25-man roster."

THE STORY: Randy Johnson struck out everybody and Shawn Estes executed the pre-Matt Cain Giants' pitching game plan of "bend but don't break". And then, in a World Series preview, Byung-Hyun Kim blew the save by giving up a home run. This time, though, it was to Scrappy-Doo Marvin Benard. My recollection of that home run was that it was opposite field and curled around the left field foul pole in Arizona. The Giants 4-game sweep knocked Arizona out of first place and put them 4 games back of the Dodgers, who were now leading the division.

SFGATE SAID: "Rich Aurilia homering off a nasty Randy Johnson to tie the game in the eighth? Sure. Marvin Benard coming off the bench to win it with a two-run homer in the ninth off a guy who'd allowed three hits all month? Why not? Shawn Estes beating Arizona for the first time in three years? Heck yeah. These are the Giants of the Andres Galarraga era, and it's time to expect the ludicrous, such as a four-game road sweep of the Snakes. It's there in black and white for all to see and disbelieve." [Link]

Look, I'm sure if you had paged someone that in May of 2001 their mind would've been blown, but I'm telling you that googling and pulling up that quote is blowing my mind RIGHT NOW.

"I'm sure everyone in the Bay Area is jumping up and down right now." - Shawn Estes

2001 BRYAN SAYS: "THEY BEAT RANDY JOHNSON! MARVIN BENARD! MARVIN. FREAKING. BENARD! WHO KNEW? Hey, Jeff, listen, I'm not sure if this is a compliment or not, but last night, she told me it was like being with a woman. I-is that a good thing?"

WHOA. I TOTALLY FORGOT THAT: The Giants had traded Bobby Estalella to the Yankees that season (for the aforementioned and previously forgotten Brian Boehringer!), making Edwards Guzman the official backup catcher. I say that because I don't remember Benito Santiago catching every game of that series. I mean, I guess it makes sense that he would, but I was thinking that he was so old already, why give him such a ridiculous workload? And, wait, when was Yorvit Torrealba a thing?

So, I did a little searching. July 16th and 21st (on July 24th he started and played full game at FIRST BASE!) were the only times before this four-game series that Edwards Guzman started. Afterward: August 2nd and 9th. So, about once a week, the backup would get a start. Thing is, Santiago was 36 years old in 2001. He played in 133 games and had 515 plate appearances (126 games and 517 plate appearances the following season, for what it's worth), both the most he'd had in a single season since *1996*. Between 1996 and 2001 he played in 310 games total and had 1059 plate appearances (to be fair, he was in a brutal car accident in January of 1998 which pretty much wiped out his age 33 season).

Dusty Baker abused that juiced-up old man. And, really, point all you want to Bonds' head size and sustained performance as a sign of performance-enhancing drug use, but Benito Santiago was basically hiding in plain sight, even hitting behind Bonds. There's no way a 35-year old (he signed with the Giants in 2000) catcher who was already on the decline before a major trauma suddenly has a renaissance at the plate without some major help. I mean, wow. So obvious.

I don't want to go off on a whole tangent here about Yorvit Torrealba, but why was Edwards Guzman considered a viable backup? He had been in the minors a third baseman, primarily, and was 2 years older than Torrealba. He hadn't hit much better in AAA than Yorvit. Was age really that big of a deal? Was it the defense? Attitude? Pitch calling? Was Guzman's versatility that big a factor? Late in 2001, at third base blundering a crucial play (it'd go down as a fielder's choice, but I remember it being bad fielding) against the Dodgers that led to a loss in a tight game that could've cut the division deficit down to 1 game. Why was he considered by the organization to be the best option?