Share All sharing options for: Reminiscing about Game 163 in 1998

Boy, I'm sure glad I'm not a Rays or Rangers fan right now.

Okay, that's a lie. But there's a half-truth to it. There's a freedom here, you know? All that worrying, the living and dying after every pitch … gets old, man. It hasn't been like that for the Giants since the 16-inning loss to the Mets. The B-side for that jam was the Giants signing Jeff Francoeur. Since then … like floating on a raft sailing down a calm river of disappointment. Nothing to worry about. Put your feet up and get a hayseed in your mouth. It's kind of beautiful. In a horrible, horrible way.

Baseball was trapped in a burning building and only Mark McGwire and Sammy Sosa knew how to disarm the bomb before the plane crashed. Spoiler: They saved it. Baseball, I mean. And all of us. And Sosa was doing such a good job saving baseball, that he was simultaneously helping the Cubs win baseball games. When September started, the Cubs and Mets were tied for the Wild Card, with the Giants two games back.

But after a 1-0 loss to the Dodgers in late September -- in which they wasted a Brian Johnson triple with no outs in the eighth -- the Giants were four behind the Mets and three behind the Cubs with eight games left. They would need the Mets to lose every game, basically, and for the Cubs to screw everything up at the same time.

That's exactly what happened. The Mets never won again. The Cubs screwed up hilariously. And the Giants had a clear path to the playoffs. 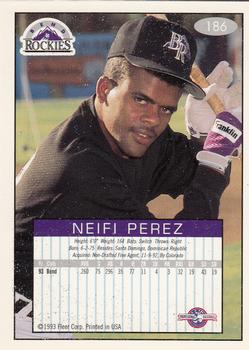 Read the play-by-play of this game to get an idea of how frustrating it was. The Giants were ahead 7-0 at Coors Field in a game that would automatically put them in the playoffs. They lost. Neifi had a two-run triple and a game-winning home run that still makes me want to punch a wall.

But we're here to talk about Game 163. Forget the Neifi game. Forget that Neifi's .256/.285/.348 line in 2004 single-handedly kept the Giants out of the playoffs that year, too. JUST FORGET NEIFI PEREZ. WORKS FOR ME. I'M REMARKABLY WELL-ADJUSTED NOW BECAUSE I RARELY THINK OF NEIFI PEREZ, YEP.

Sorry, Game 163. The box is here. The Giants got one hit against starter Steve Trachsel, who is still standing on the mound in Wrigley, about to think about considering possibly delivering the pitch in the near fu … nope, pickoff attempt. But Trachsel walked six and hit a batter. They had the bases loaded in the fourth with Brian Johnson up. He was called out on strikes.

I still think it was a ball. Man, I wish that we had PITCHf/x for that game. It was a ball. I think. Probably. We're going with it.

Point of order: Gaetti looked so much like a rat, that his nickname was "The Rat." Like, he just had to wear the name because it was so obvious.

The Cubs would go up 5-0 before the Giants staged a late rally. With the bases loaded, no outs, and a run in, Barry Bonds hit a screaming line drive off Terry Mulholland right to Sosa. Jeff Kent grounded in another run, and Joe Carter came up as the tying run, only to pop out. Rod Beck got the save.

It was another ignominious end to a long season. The Giants hadn't won anything in a playoff situation since Will Clark's single up the middle against Mitch Williams. It was a special kind of dejection, that feeling of knowing nothing good was ever going to happen to the Giants.

Also, if we go back in time and stop Neifi's grandparents from meeting, I'm pretty sure we all have health care and flying cars by now. All I need is $100,000, some plutonium, and someone who's good with a rifle. You know my e-mail address.

Comment starter: What do you remember about Game 163? If you're a teenager or college student, please do not draw attention to your youth. The rest of us resent you, you know.