Padres homer hella, down Giants in next-to-last game of the 2013 season.

Share All sharing options for: Giants lose on unofficial Hunter Pence Day, clinch at best a tie for third place.

Usually, the episode before a cable TV show's finale -- the penultimate episode -- is where a lot of action happens and the status quo of the entire series is altered permanently. That's not a great comparison for a baseball season, which is long and winding with lots of reversals, but also so structured that by the end of the season, there's usually not much that can be done to reverse the fortunes of an entire season. A bad team stays a bad team even at the very end.  And yet, since I'm pretty committed to this bit, I think this game followed the episodic format, and as the penultimate Giants game of the 2013 season, I believe it served as a terrific reminder that, "Oh yeah, this was the season".

A standard one-hour TV drama is broken into a teaser and four acts.

Hooray! The night after he wins the Willie Mac Award and gives a terrific speech, word gets out that the Giants have re-signed their pending free agent right fielder and motivational speaker, making today's game against the Padres almost like an unofficial "Hunter Pence Day".

Chris Denorfia hits a home run on the second pitch of the game, giving him a career-high 10 home runs in a season. This is certainly bad news, as it's Chris Denorfia, but following the home run, once near-perfect starter Yusmeiro Petit retires 11 Padres in a row, giving the Giants enough time to tie the game, thanks to doubles from Angel Pagan and Pablo Sandoval, and then take the lead after Hunter Pence homers on his unofficial day. What a first act!

This is where a big twist or plot reversal happens, and by golly, is that exactly what happened here.

Petit settled into a groove after Denorfia's home run, but then gave up a ringing double to Chase Headley with two outs in the top of the fourth. Now, with a runner on second base, Tommy Medica, Spanish for "medical", proceeds to operate on Yumseiro Petit's meager fastball, slider, curveball arsenal. The big twist was a big inning.

Petit threw everything he had, his best pitches, at Tommy Medica, but the rookie fought him off over a decently epic 14-pitch plate appearance. 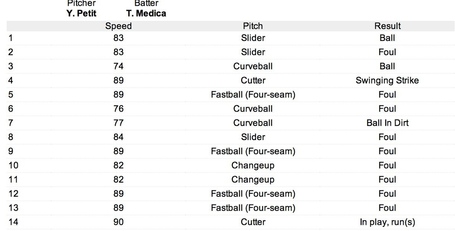 Medica did get a "he can hit" from broadcaster Mike Krukow, which is typically a curse when bequeathed upon a Giant, but a gift when a Giants' opponent receives the label and lo it was true here. Also, he went to Santa Clara, which, as a St. Mary's grad, I say, "harumph". Still, this was a good reminder that Petit's arsenal isn't fearsome. It's major-league quality to be sure, but I've always thought his straight fastball and floaty breaking pitches lent themselves to situations exactly like this: he'd have to throw a lot of pitches to get batters out.

As it stands, he's been pretty masterful with his control and has gotten weak contact when it counted. There's literally no downside to keeping him around next season, especially since his low service time keeps him under Giants' control for a few years. Today, Medica fouled off enough location until Petit made a mistake (which, just eyeballing it, was at most, like, 4 inches off the target when compared to the first pitch of the A-B) and, wouldn't you know it, that ruined everything. The Padres put up a 4-spot, Bochy pulled Petit, and that was it. Or was it?

This is where a new complication follows the big twist. In this case, the Giants tried to let this game get out of hand by inserting into the game their odious relievers, only...

The Giants keep it close somehow despite pitching George Kontos, Jake Dunning, and Jose Mijares. Heath Hembree had two strikeouts in his appearance, after relieving a shakily effective Jean Machi (pretty sure that's the only way to describe Machi, by the way), and the bullpen somehow, someway kept the Giants in this game, down only two heading into the ninth.

Here's where the resolution happens...

And then Mike Kickham was inserted into the game. This is where the shocking end comes into play.

Again, Kickham allowing 4 runs on 6 hard hits doesn't really alter the color or storyline of this entire season. If anything, it and the Petit-Medica face/off served as fantastic reminders of what this season has been all about: the Giants grapple with their opponent until they are just beaten senseless by a superior force.

And the game ended with the bases loaded and Brandon Belt striking out, which was dumb.

Dumb because Brandon Belt has become a major character in this story, one we're rooting for, and the last thing we want to continue to happen to him is that he gets the Skyler treatment from ignorant fans. Because Brandon Belt is really good.

The Giants might be good again next season. There's certainly room for optimism if you look at who's coming back alone. The Giants might not be great next season, but who really knows? As always, it'll come down to the pitching. The people who run this show are going to have to make some tough decisions and hope to get lucky with a few developments in some combination of player development, the trade market, and/or free agency. Just like every team every year.