A short history of Giants homers against the Dodgers

Share All sharing options for: A short history of Giants homers against the Dodgers

There have been 8,072 Giants home runs since the team moved to San Francisco. I'm in Baseball-Reference.com hyper-factoid mode, so they're going to come at you quickly.

This is actually me exercising restraint. I could look this stuff up all day. The Giants have hit 109 homers in Shibe Park and 32 at Parc Jarry. I don't even know what that last one is! 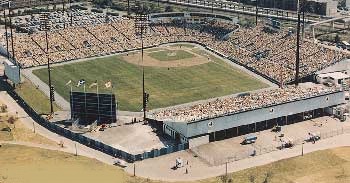 Oh, damn, that's gorgeous. Got it. Jarry Park in Montreal. Look for the bad seat in that picture. This is worth a read if you're interested in the first home of the Expos.

But I digress. We were talking about dingers. And I'm thinking about dingers because I had no idea what to write about another Giants/Dodgers series. It'd be easy if the season weren't already decided. The Dodgers are winners. The Giants are losers. The Dodgers are going to have bunting all around their stupid stadium in a couple weeks. The Giants are just waiting for the next monster-truck rally or Dave Matthews concert before baseball season.

So we must celebrate these events.

Here's the first 500, and here's everything after that. Now let's pay attention to a few categories.

First!
That would be Daryl Spencer off Don Drysdale in the first game in San Francisco. The Giants won 8-0 at Seals Stadium. Up yours, Kevin Elster.

Willie Mays
The Giants played back-to-back two-game series against the Dodgers in May, 1958. Willie Mays hit seven home runs in those four games, possibly because the left-field porch in Los Angeles was just a liiiiitle short.

Mays had more homers against the Dodgers than any other Giant, 56. The full list:

Will Clark had 15, in case you were wondering. Three more than Pedro Feliz.

Win probability
The highest WPA for any Giants homer against the Dodgers was in 1959, when Leon Wagner hit a pinch-hit, walk-off grand slam. Sandy Koufax loaded the bases and was pulled for a reliever.

The second-highest WPA? Why, we can watch that one.

One of my favorite games ever. Sniff.

Grand slams
Hunter Pence's grand slam last week was the 19th against the Dodgers since 1958. Here's the full list. No Barry Bonds. No Orlando Cepeda. But Pedro Feliz.

It's a shorter list than you might think. And check out how the Giants went almost two decades between Bobby Bonds and Will Clark. They had walk-off homers in back-to-back games against the Dodgers this year. Weird. A third of those were hit by catchers. Also weird.

Also, damn, Jim Brewer. Get your act together. I don't know whether to make a Felipe Alou warm-the-same-pitcher-up-six-times-in-the-same-game joke or a Half Baked reference, but I have a feeling there aren't a lot of vintage Brewer jerseys in the stands these days.

The last come-from-behind, walk-off homer against the Dodgers? Over 40 years ago. I'm not saying there's a way to salvage this season, Giants. But if you wanted to try to make amends, that would be a heckuva start. Especially if it bounces off Yasiel Puig's ego and over the fence. Man, I have some ideas.

Thanks for indulging me. Dingers against the Dodgers? Why, that's just about my favorite subject. Here's hoping for a bushel of them this week. Or maybe just one. Could we get one? That's not too much to ... okay, that's probably too much to ask.