Don't like it? Figure out how to make it better next year, everyone. 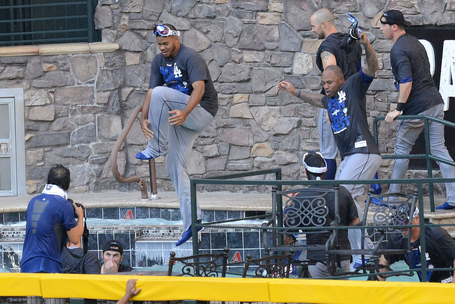 While I approve of their Diamondback-humiliating policy, I'm going to have to disagree with their Dodger-celebrating policy. 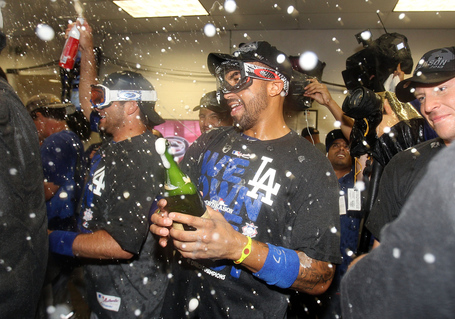 You're telling me there wasn't one person in Arizona standing by the pool, cocking a shotgun, spitting on the ground, and muttering, "You don't wanna go in that pool"? That goes against every stereotype I hold dear.

All year, I've heard it from people who are disgusted about Giants fans feeling like they have the right to complain about a down year. "You won it all last year. And then two years before that! Shut it. You don't get to complain until 2054."

They get it now. Everyone gets it. Baseball seasons are so damned long. So much happens in them. By September, the warm fuzzies from the previous September are gone. The half-life on those suckers is pretty short.

And while you're free to feed a peanut to your Aubrey Huff bobblehead and think about Justin Verlander right now, this is the hidden cost of the transaction. Every team gets to celebrate like this, and they'll get to do it as loudly and as obnoxiously as possible. Except for the Padres. The Padres are doomed for eternity. The Padres will sulk and sulk for decades, and when they finally have a great team, the ice caps will melt and society will collapse. But enough about those dorks.

It's easier to take than it was in 2009, that's for sure. But it's not easy. Sign Masahiro Tanaka. Sign Jose Abreu. And Jacoby Ellsbury. Trade Hector Sanchez for Giancarlo Stanton. STOP SITTING ON YOUR HANDS.

Sorry. The Dodgers won the National League West. When that happens, decorum and rationality go out the window.

I hope Tommy Lasorda has ingrown toenails on 10 toes.