For the first time in five seasons, the San Francisco Giants will finish with more losses than wins.

Of course that 82 loss came after a pitching meltdown. That's how it had to be. It was poignant, in a way.

If you're still getting upset at these losses, well, I'm sorry for you. I mostly watch games like this like it's a repeat viewing of Indiana Jones and the Kingdom of the Crystal Skull. Lips pursed, eyes glazed, silently cursing the people who were previously great. This is the kind of game where you think about draft order. It's the only thing that'll keep you sane. In 2018, you're going to be smitten with Jacob Gatewood, and the only reason the Giants will have him is because Santiago Casilla couldn't throw strikes on a warm September evening.

That, and because an umpire was human: 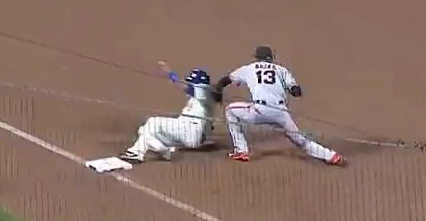 That would be the tying run. Out. Maybe. Whatever.

Whatever. Whatever! Whatever to this whole season. Joe Nathan just blew a save in the 12th inning of a game the Rangers absolutely need. Now that would feel bad. As is, this loss was a gross olive on top of the pork sundae. The pork sundae is rancid. Olives are gross, too.

And to think, this recap was supposed to be about Matt Cain. This wasn't the best start of the season for Cain. Not statistically, though it was close. It was his best start of the season when it came to stuff and command, though. Wherever Buster Posey was putting the glove, Cain was putting the ball. The sliders were breaking below the zone, and the fastballs were riding over/into hitters' hands. It was fun to watch.

By my count, this is the eighth caining of the year. I don't remember that many last year. On the whole, I liked last year more than this year in several different ways.

If you're looking for a silver lining, though, I have one for you. In this scenario, the Giants have the exact same record. It's a lost season, everything's ruined, and nobody's happy. But in this scenario, Matt Cain started hot and broke down at the end of the season. So right now, we'd be asking what's wrong with Matt Cain in increasingly panicked whispers. When the offseason came, and the Giants needed to look for pitching, there wouldn't just be the question marks left the open spots in the rotation. There wouldn't just be the question mark of the suddenly less effective Ryan Vogelsong. We'd have to wonder about Matt Cain.

Right now, I'm not wondering about Matt Cain. And I'm penciling him in for 200 good innings next year. I prefer this sequence a lot more than the other scenario. There will be enough to think about in the offseason. It's nice that Cain probably isn't going to be one of those things.

Third-best xFIP of his career, everyone!

Shut Sergio Romo down. Find a phantom injury. Make up a cover story. But if pitching him in back-to-back games is such a concern that it's preferable to start Santiago Casilla in the inning, Romo shouldn't be pitching in the last two weeks of a garbage season. His strikeout rate is the lowest its been since his rookie season, and that's with strikeouts up around the league. He's still effective. He's still one of the better relievers in baseball.

But if there's a concern with him that makes a manager reach for a leaking can of Casilla in the ninth inning on purpose, let him rest. Pick the slider up again next year, and put that elbow on ice.

Aaron Harang pitching to Hunter Pence? I like to call that "The Battle of People Who I'm Scared Will Stand Over My Bed and Watch Me As I Sleep."

It seems like Harang started six hours ago. The Giants had their chances to knock him out early. They did not take those chances. Better now than in a season that means something.