Did you know that if you win 2 out of 3 World Series the broadcast networks want to put you on TV in your own show? Neither did the Giants.

It's Fall Premiere Week! That's right, it's the time of the year when the aged television broadcast networks unveil their new schedules and new series. Earlier in the year, the networks selected these new shows from dozens of possibilities called "pilots." Since the Giants have won two of the last three World Series, it came as no surprise that Hollywood wanted to feature as many players as possible in new programming (despite not recognizing that baseball is a mostly regional sport and most of those regional fans root for laundry whether they know it or not). Networks started working on making shows centered around Giants players almost immediately after the final out of the 2012 World Series.

Unfortunately, none of these shows were picked up by the networks that developed them. That shouldn't be too much of a surprise, as there's limited shelf space for new shows, and creators/writers with long track records typically get preferential treatment.

But the good news is that my fancy Hollywood contacts were able to get me the scoop on every single one of these Giants-related pilots. I was even able to see (and in some cases, get clips from) most of these pilots. Here's a glimpse at a possible future that will never be, where our favorite players on the baseball diamond almost became our weekly episode heroes: 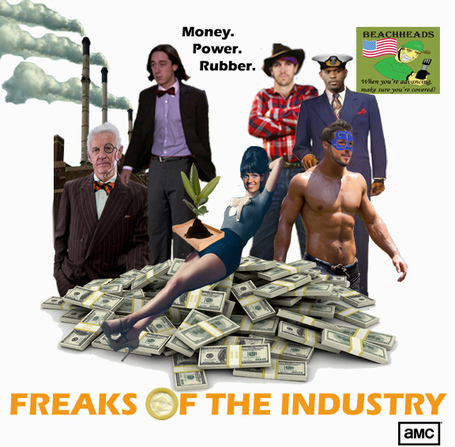 Title: "Freaks of the Industry"

What's it about? It's 1946. World War II has ended, and the young men and women leaving the service try to acclimate to civilian life. A wealthy former G.I. Joe, Maximilian Shubert (Lincecum), sees a business opportunity when a desperate farmer, Bob Tunsten (Zito), begs Shubert's father, Errol (Neukom), for a loan. Shubert decides to use the humble farmer's land to grow rubber plants and make prophylactics (called Beachheads).

But it turns out that a product designed for use in the bedroom is controversial, which means there's very little competition in the marketplace, and young Maximilian quickly discovers that in order to climb to the top he'll need to forget about truth and justice and simply fight the American way: by any means necessary. He enlists the aid of a famous traveling wrestler, The Donkey (Kontos), to help generate popularity for his product. The pilot ends with Maximilian hiring a pirate, Orta (Casilla), who can make sure the competition's shipping lines are disrupted. This truly is a bloody business.

What worked: This would've been a nice period companion piece to "Mad Men", and considering that Jon Hamm's vehicle ends next season, "Freaks of the Industry" could've become the new prestige show on AMC. You can see every dollar of the budget on the screen, from the brill cream to the overalls, to the poor lighting, to the rubber. My goodness, the rubber. So much rubber. Barry Zito's wife, Amber Seyer Zito, is great as Max's girlfriend, Audrey, and I really liked that her character was set up to seem like she was only after Max's money, but then was shown to be her boyfriend's business equal. And I like that they didn't shy away from chemistry between her and her husband. That's right: the pilot sets up a possible romance between big-city gal Audrey and Farmer Bob. It felt authentic for the period. George Kontos looks like a great wrestler. Santiago Casilla is effectively shady, even if it comes close to playing on the "dark skin = evil?" stereotype.

What didn't work: Tim Lincecum just cannot act. He looks like he's waiting for the director (Alan Taylor) to yell cut so he can jump on his PSP. The scene where he (as Max) and Audrey canoodle post-romp is uncomfortable because he looks like a total goober and she looks like an adult woman.

Best Line/Moment: "I retire to my tent for but two reasons: slumber and fornication. I've already stolen a wink..." - The Donkey

Why it didn't go to series: Insider sources say that the network didn't think Lincecum could carry a show by himself and were concerned that the supporting staff wouldn't be able to cover for his questionable talent. They did "love the shirtless guy, though".

The evidence: This was the toughest show to get any dirt on, so all I managed to grab was a scan of 1 script page.

FOTI_PilotPage (does not automatically open in new window)

What's it about? A reality-style dating game show wherein Nick Noonan goes on three blind date from a pool of 13 women that culminates with a spooning session. If he likes how the spooning goes, then there will be a second date. HOWEVER, he can only pick ONE of the three spoon sessions to advance on to the next round. The losing dates get cold pillows (literally, pillows that were stored in a meat locker) and sent home.

What worked: Noonan is a capable "leading man", and it's easy to see why any person would sign up to go on what is ostensibly a dating game show. He's good-looking, affable, and, apparently, a quality Big Spoon. Daisy Fuentes keeps the proceedings light, masking the creepiness of the premise for most of the episode.

Best Line/Moment: Nick's leg falls asleep while spooning with a woman who turns out to have night terrors, and he can't get away fast enough before she punches him in the throat.

Worst Line/Moment: "She's really special. She could be the one." CUT TO: Seconds later, as she closes her eyes and says, "You feel just like my brother."

Why it didn't go to series: Had limited potential, and very quickly VH1 realized that cutting costs by having who is essentially a 25th-man star in the show meant a very limited, practically nonexistent draw for a general audience. 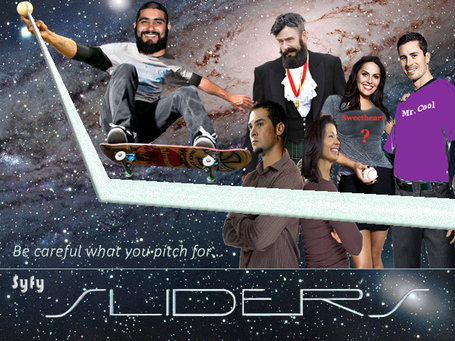 What's it about? Sergio Romo is hired by a rehabilitating Brian Wilson to teach his famous frisbee slider. Wilson brings an "enchanted" bucket o' balls that was acquired during a recent trip to Ireland, and one of those balls has the power to bend the space-time continuum. When powered by Sergio Romo's famous pitch, it does exactly that, sending anyone within a 20-foot radius into a parallel universe! In this show, Sergio Romo lives next door to the Vogelsongs (who do not have any children in this show). On the day of the tutoring session, the Vogelsong's good friends the McCarthys, Brandon and Amanda, stop by. They all stand outside and make fun of Brian for a bit, since he's wearing a kilt for reasons unknown (and never explained). So when Romo's sliders activates the ball's powers, they are all thrust into an alternate reality.

What worked: I like that the structure of each show requires the characters to find where the baseball landed in the parallel universe. Pretty simple, but due to the nature of space-time, the ball could be anywhere in the city. That's about all I liked.

What didn't work: Brian Wilson's schtick was dead before they shot this sucker, so seeing it dredged up and presented as though he was the go-to punchline in every season not only fell flat but felt insulting. The McCarthy's mastery of Twitter did not translate to a memorable television couple with witty, clever dialogue snapping between them. The script overall was pretty terrible, actually.

Best Line/Moment: "We're all in agreement, Brian. Put on some pants." - Amanda McCarthy

Worst Line/Moment: In the second universe, bartenders get their jobs by running for office like a politician. For whatever reason, Nicole agrees to let Brian Wilson campaign for her with the slogan, POLL FOR NICOLE. And the Vogelsongs *let* him be their campaign manager.

Why it didn't go to series: People realized that the original "Sliders" explored this idea enough and there was no real audience for it. Besides, Jerry O'Connell would've been bugging SyFy every day until they caved to let him guest star or just take the reins. 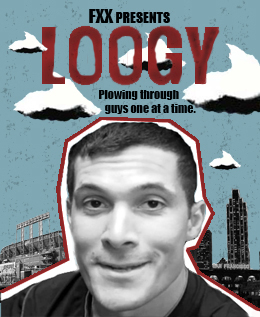 What worked: Javier Lopez is funny. I was not expecting this.

What didn't work: I don't believe in a thousand years that Javier Lopez would go to CC Sabathia's mansion and crash the birthday party of CC's daughter just to prove he was a better left-hander.

Best Line/Moment: "I can be here. Multi-situational and situational are synonyms." - Javier Lopez

Worst Line/Moment: Lopez adjusts the performance sliders for CC in his son's saved MLB: The Show game so that CC -- whom his son idolizes -- is terrible. He also makes his video game character amazing.

Why it didn't go to series: Too similar to what it's clearly ripping off: the Emmy award-winning comedy, "Louie". Also, it's impossible to see Javier Lopez as a sad sack. Guy's a winner. And he's smart. And he isn't self-loathing. It was weird watching him struggle with his confidence. But mainly, this was just a rip off, plain and simple. And it turns out there's not as big of a market for shows about left-handed specialists as some had imagined.

Starring: Hunter Pence, aliens from across the galaxy

What's it about? Apparently, it's supposed to be a random Cartoon Network type cartoon comedy that vaguely follows the "Sesame Street" or kid's show model. So, there's lots of educational items, but filtered through the perspectives and experiences of the inhabitants of Sector AG-760.

What worked: It's appropriately weird, as all Adult Swim shows should be.

What didn't work: Very tough for human characters to relate to aliens, I think. Also, it's very, very, very weird.

Why it didn't go to series: Insiders claim that Hunter Pence's devotion to historical and cultural accuracy hampered production efforts. He wanted every frame to be as authentic as possible. Most people scoffed and thought he was kidding. It's also very weird. VERY ALIEN.

Pilot scripts that were developed but never shot: "The Lovable Loser" (Matt Cain returns home after an up-and-down baseball career but nothing seems to go his way -- think "Everybody Loves Raymond"), "The Bronx Zoo" (Panda and the Giraffe are partnered as beat cops in the Bronx for some reason), "Theriot Nights" (Ryan Theriot works as a P.I. out of an abandoned strip mall).