How much should Hunter Pence get now?

Share All sharing options for: How much should Hunter Pence get now?

Almost a month ago, we talked about what it would take for Hunter Pence to come back to the Giants.

Maybe (his decline would come in) three years, but I'd take the risk for a third year (because there's no way he's coming back for two). The fourth year would be a bummer of a season, I'm thinking. Pence keeps himself in great shape, but at some point even Mike Trout's bat speed will go away. That's the way Darwin created the world, which is one of the reasons I certainly don't want my kids reading about him. So a four-year deal would be dicey.

Since that post, Pence has hit .357/.419/.657, with 11 homers and 41 RBI. Just as impressive, he's struck out just 25 times in 160 plate appearances, walking 16 times. Combined with plus speed, plus defense, and a plus arm, that's a ... plus player. Indeed, this season is likely to be Pence's best by WAR, which is something of a surprise considering that he's had several good seasons in the past.

So now it's time to revisit those mock contract offers from August. Hey, he's had a good month. Doesn't that mean his price goes up substantially?

Maybe that's a little harsh. But when I'm thinking, "Here's what Hunter Pence is likely to do," a .300/.350/.500 season is within the realm of possibility. It's at one end of the spectrum. On the other end is a .240/.310/.410 season, which is actually much better than what Pence did last season. Remember, there was some talk that he wouldn't even be tendered a contract before the season. Talk that was rightfully pooh-poohed by Brian Sabean, but still. It wasn't a completely ridiculous question.

And in the middle of that spectrum is the Pence you're should expect if you're being realistic. Then in 2015, expect a little less. In 2016, expect a little less. Same goes with 2017. Now, player declines are rarely that linear, so there's a strong chance that in one of those seasons, Pence tumbles down Rowand Mountain, to reuse a visual, but you're paying for the short-term production with the expectation that the long-term prognosis isn't so hot.

And that expected short-term production is most certainly not what Pence has been doing over the last month. It's fantastic that he's been doing it. Especially against the Dodgers. That part is, you should know, especially appealing. But I'm not paying on the assumption that it'll happen at any point over the next four years. Well, I'm not paying for anything. The Giants shouldn't pay for that assumption, either.

Okay, maybe they should get involved. But not get too crazy. 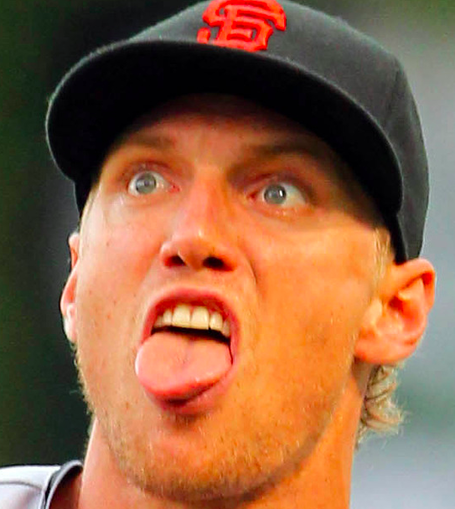 It's been fun to watch.