Before the series started, right after the series preview was posted, a Dodgers fan tweeted something like, "lol you guys are going to get crushed." Which is fine. Twitter is made for smack-talkin' if it's done in a friendly, non-harassing way. This tweet qualified, and it's not like my delicate sensibilities were offended.

But I thought, huh, that's weird. To be so sure about a series? It's still baseball, right? One of the reasons the Giants didn't make the playoffs in 2011 is because they had troubles beating the Cubs and Astros late in the year. Baseball's funny like that. It wants you to smell the obviously fake flower on its lapel, and you get squirted in the face every time.

Except the Dodgers haven't been playing baseball. They've been playing Contra with the Konami code and a Game Genie. They weren't even pushing pause when they got a bowl of cereal. What's the point? They got this. The Dodgers weren't outscored by 16 runs in all of their losses from June 29 through August 5. They forgot what baseball really is.

Well, it's kind of like that. Which isn't to suggest this game is proof the Dodgers aren't ready for the playoffs, or that the Giants were the better team all along. No, no, nothing that grand, nothing that big-picture. But sometimes baseball is freaky. Sometimes the hits fall in, the pitchers get knocked around, and the out-of-position defenders look like they're playing out of position. The Dodgers haven't had one o' them games in a while. This was one o' them games.

I'd like to think they looked around and said, "My god, we're playing baseball. Did you … wait … baseball? Get me the president. Of the Dodgers." Totally gobsmacked. That's right, this is baseball.

And this baseball thing can be pretty difficult.

/Ricky Nolasco pitches like the guy the Marlins couldn't give away in January.

Hold on, maybe this isn't so easy.

/Michael Young goes to field a ground ball, wakes up in a dumpster behind a Del Taco in Yorba Linda

Baseball is hard, y'all.

This win doesn't mean anything for the Giants in the long term, and it doesn't mean anything for the Dodgers in the short term. They're still positioned well for the rest of the season and postseason. But it was about damned time they had a hiccup. Even when the Dodgers were down 12-3, the crowd was really into Juan Uribe's warning-track fly ball. Because if the Dodgers were down just 12-6, hey, why not? It's not like a comeback there would be more ridiculous than most of their last two months?

I might re-watch this before the World Series Blu-rays, you know.

The Giants aren't just making this crap up as they go along. Even when the Giants signed Mark Portugal, it's not like Bobby Giant, Jr. was sitting behind the desk his dad gave him, tossing a football in the air, and saying, "We should get that Spain guy who always kills us. You know who I'm talking about?" A lot more went into the decision, I'm sure.

So it's not like a Ricky Nolasco shutout tonight was going to mean the Giants were going to cough up a four-year, $50 million contract for him.

But if Ricky Nolasco shut out the Giants tonight, the Giants were going to cough up a four-year, $50 million contract for him. That's not cynicism; that's science. This game would be a subconscious worm, gnawing through layers of gray matter when the Giants were negotiating with Nolasco's agent.

As is, they're probably spending that money on Hunter Pence and calling it an offseason. Maybe that was Nolasco's devious plan all along! That slippery bastard.

This all goes back to the stuff up there about baseball. Nolasco isn't this good. Forget the strikeout-to-walk ratios -- he's been preventing runs like a Zito for the last three years. Yet when he went to the Dodgers, it was like he got a pamphlet titled "So You Want To Know the Secret of Baseball?"

Except there was no damned pamphlet. You hear me, Dodgers? YOU DIDN'T HAVE THE PAMPHLET IN THE FIRST PLACE. STOP PRETENDING LIKE YOU DID.

The Dodgers might well win the World Series. But they'll do it like a normal team, with Nick Punto scoring the winning run as a DH in the Series-clincher. Not by blowing every other team out of the water.

This is the kind of game that's made for Baseball-Reference.com digging. The Dodgers have played, what, 52 seasons in Dodger Stadium? Through the rabbit-ball season and the Steroid Era, from Mays/McCovey/Cepeda to Bench/Rose/Morgan/Foster, no team had ever scored 19 runs in Dodger Stadium. Here's a list of the top-scoring games in Dodger Stadium history, edited to reflect tonight. 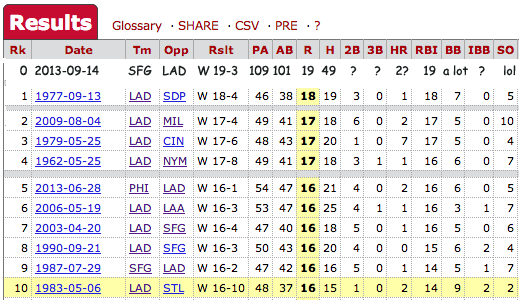 And a list of the highest-scoring games in Giants history.

Click on some of those box scores. They're a fun romp! Like tonight. Tonight was a fun romp. Romp romp.

Maybe the Giants should just play on Saturday night from now on.