Share All sharing options for: Revisiting the park factors of AT&T Park 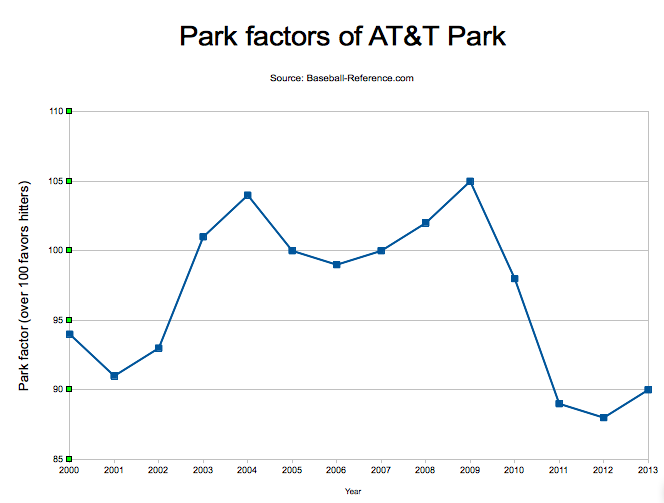 Graph! Pacific Bell Park was a pitcher's park. SBC Park was mostly neutral and occasionally a hitter's park. AT&T Park is an extreme pitcher's park. Verizon Park will have 200-foot fences down the lines and the driest baseballs physics will allow. Sprint Park will be nice enough, but the nightlife will suffer because it won't have any bars lolololol.

Back to AT&T Park this year, though. It's just as much of a pitcher's park as it was last year. That's how you get things like this:

There go our Giants. One of the best offensive teams in the league. It's so much fun to watch them outscore the competition.

The park effects are also how you get things like this:

Park factors aren't influenced by the strengths and weaknesses of individual teams. As in, the park effects won't be lower when the Giants don't have a team that hits homers, and they won't be higher when they have a team that can score runs in bunches. Look at that 2001 park factor, for example. The dingers were a-poppin', but the park still played like a pitcher's park.

The point? Well ... shoot, got me there. It's more of a lookie-here-ain't-this-something post, I suppose. But it's also something that's pretty important to keep in mind over the offseason when we're all ill with dinger fever, thinking of ways to fit Jose Abreu into the lineup. While I don't think the Giants are really one of the best offensive teams in the league, the park has made it hard to recognize just how bad the pitching has been. It's looked bad, mind you. But it's been worse.

I have no idea what happened after the 2009 season. Weather patterns? Seagull poop? Full ballparks make the air heavier, which means fewer home runs? We'll leave that to the scientists. Or astrologers. Maybe there's a moon that's in a planet when it should be in another moon. Dunno. But AT&T Park is, once again, one of the most extreme parks in the majors.

Not going to lie. I was okay with it being mostly neutral. A liiiiiiitle more balance would go a long way. It'll probably come without trying. Just like we thought last year ...